Including--a letter from Herman Baron, ACA Gallery Director, dated Jaunuary 27, 1955, to Mr. Cohen requesting its loan back to the gallery so Charles White could submit it for a John Hay Whitney Fellowship application, and a copy of Finkelstein's Charles White: Ein Künstler Amerikas. Charles White was successful with his application and was awarded the Whitney Fellowship in 1955. We believe this drawing has not been exhibited since; it has been known by its illustration in Finkelstein that same year.

This exquisitely rendered drawing is a remarkable and very scarce example of Charles White's drawing in pen and ink--Songs of Life is one of several large pen and ink drawings from the early 1950s. While White had done a series of social realist pen and ink drawings in the late 1940s, including The Trenton Six and Frederick Douglas Lives Again, he primarily drew in charcoal and crayon through the early 1950s. This large drawing is related to another pen and ink drawing, Preacher, 1952, ink on board, in the collection of the Whitney Museum of American Art. Both display his mastery of foreshortening with a compressed figure, and an expression of spirituality. It also anticipates the large later pen and ink drawings Oh Mary, Don't You Weep, 1956, and Folk Singer, 1957. Songs of Life is a celebration of the inspirational power of song and hymn in the lives of African Americans. Gedeon D75.
Set Alert for Similar Items 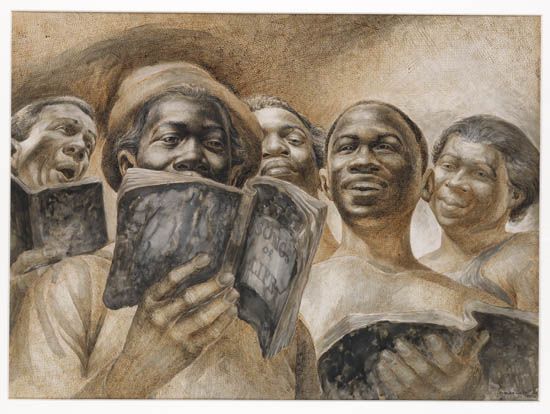