7 September: ". . . I do not feel sufficiently qualified . . . to become one of your Members. Perhaps in the meanwhile you will send me a copy of your Rules."
23 September: ". . . Would you mind . . . letting me know whether . . . there is any rule regulating the number of bricks which a man may lay in a day? Also is there any rule that a trade unionist may not work with one who is not a trade unionist . . . ?
". . . I should be very pleased to join the Union, if you are of the opinion that it would not be unwelcome to your members. I take a high view of the dignity both of craftsmanship and manual labor."
3 October: ". . . Although I cannot pretend to be fully qualified, I shall be glad to accept your invitation to become a member of the Union. I enclose herewith my entrance fee. . . ."
with--7 pages of retained copies of letters from Lane to Churchill between September and October of 1928, inviting him to join the union, answering questions, and sending information a copy of a 2-page statement by the Executive Council of the AMUBTW for publication in 1928 in the Daily Herald announcing the ineligibility of Churchill for membership in the union large scrapbook containing over 300 newspaper clippings of articles and cartoons addressing his stint as a bricklayer, his acceptance of union membership, and subsequent rejection by the union a TLS from historian Elizabeth Longford and retained copies of letters to her concerning the whereabouts of Churchill's membership card, 1975-79.
After newspaper articles appeared in September of 1928 documenting Churchill's activities as a bricklayer at his Chartwell estate, James F. Lane contacted him on behalf of the AMUBTW to invite him to join; in October, he accepted. When the news was announced, the membership rose up in opposition to Churchill's admission to the union, prompting the administration to declare him ineligible, explaining that Churchill's admission form was incomplete and his check never cashed. 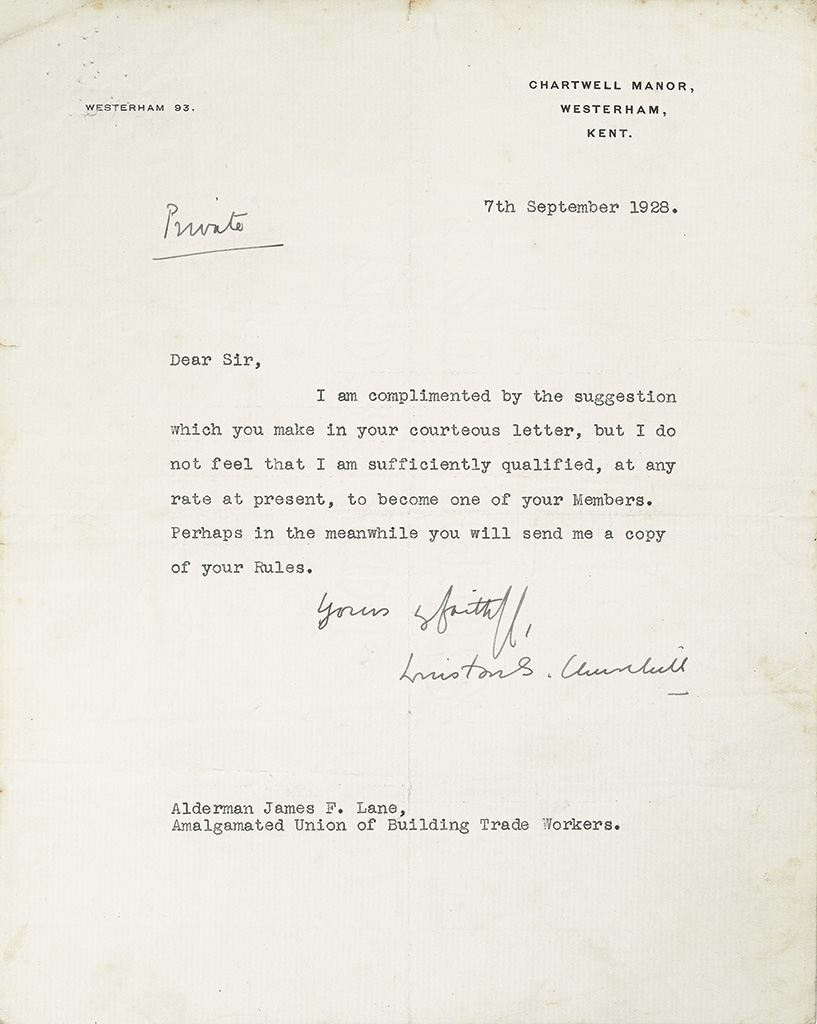