Price Realized: $ 7,500
Price Realized: $ 9,375
?Final Price Realized includes Buyer’s Premium added to Hammer Price
Estimate: $ 10,000 - $ 20,000
CITIZEN GENÊT AFFAIR: "GOVERNMENT . . . [NOT] AUTHORISED TO DO ANY THING" THOMAS JEFFERSON. Autograph Letter Signed, "Th:Jefferson," as Secretary of State, to MD Governor Thomas Sim Lee, reporting that he has shown Lee's letter to President Washington, explaining that issues raised in the letter [requesting guidance concerning the involvement of an American in the recent French capture of a British vessel in MD] had been addressed by the instructions sent to him by the Secretary of War [Henry Knox on May 23 and 24], and by instructions sent to the MD District Attorney [by Attorney General Edmund Randolph on May 12], and stating that the Federal Government is not authorized to hinder the French from taking the British vessel. 1 page, 4to; short closed separation at fold repaired verso with cello tape, faint scattered offsetting, folds, faint scattered soiling verso. Philadelphia, 25 May 1793
Set Alert for Similar Items

"I am honoured with your Excellency's letter of the 20th. and have duly laid the same before the President. Measures had been already taken for prosecuting such American citizens as had joined in the capture therein mentioned, a letter to that effect having been written to the Attorney of the US. in the state of Maryland. With respect to the prize, the government did not think itself authorised to do any thing. Your Excellency will have been informed by a letter from the Secretary at war, addressed to you as the head of the militia of your state, of the measures proposed for preventing the fitting out [of] privateers in our ports in future, as well as for the preservation of peace within our limits. . . ."

Soon after his arrival at Charleston, SC, on April 8, 1793, newly-appointed French Minister to the U.S. Edmond-Charles Genêt began commissioning privateers to seek out and capture the ships of Britain and Spain (against whom France was at war) in U.S. ports or waters. One of the four privateers commissioned was the schooner Sans Culotte, which, on April 29th, captured the British schooner Eunice off the coast of VA. This incident was the subject of Governor Lee's letter to Jefferson. In the week prior to the capture of the Eunice, President Washington had issued a Declaration of Neutrality in response to the breaking out of war between Britain and France. While Jefferson believed in the necessity of a neutral stance, he and Attorney General Edmund Randolph differed from the opinion of other members of the cabinet with respect to the enforcement of the neutrality, especially Secretary of Treasury Alexander Hamilton and Secretary of War Henry Knox. The exploits of Genêt's privateers threatened U.S. neutrality, but Jefferson and Randolph held that the 1778 Treaty of Amity and Commerce with France obligated the U.S. to allow French privateers to capture their enemies and enter U.S. ports with their prizes without interference. Hamilton and Knox argued that the U.S. ought to declare the Treaty void, and that not returning a captured ship in U.S. waters to its owner would make the U.S. an instrument of the aggressor in violation of the terms of the neutrality. Disputes about the enforcement of neutrality recurred between the Administration's two camps as new incidents arose involving Genêt's privateers, culminating in the adoption by both camps of eight rules, approved by the president, clarifying U.S. policy on neutrality. In these rules, sent in the form of a circular to the state governors by Knox on August 7, 1793, privateers were forbidden to bring captured ships into U.S. ports, demonstrating a shift in Jefferson's opinion from that expressed in the present letter. Genêt, after repeatedly disregarding the instructions of the Administration regarding the dangerous behavior of his privateers, was recalled to France at the request of the U.S., but was permitted to remain in the U.S. in order to avoid persecution by the new Jacobin government.

From the Collection of William Wheeler III. 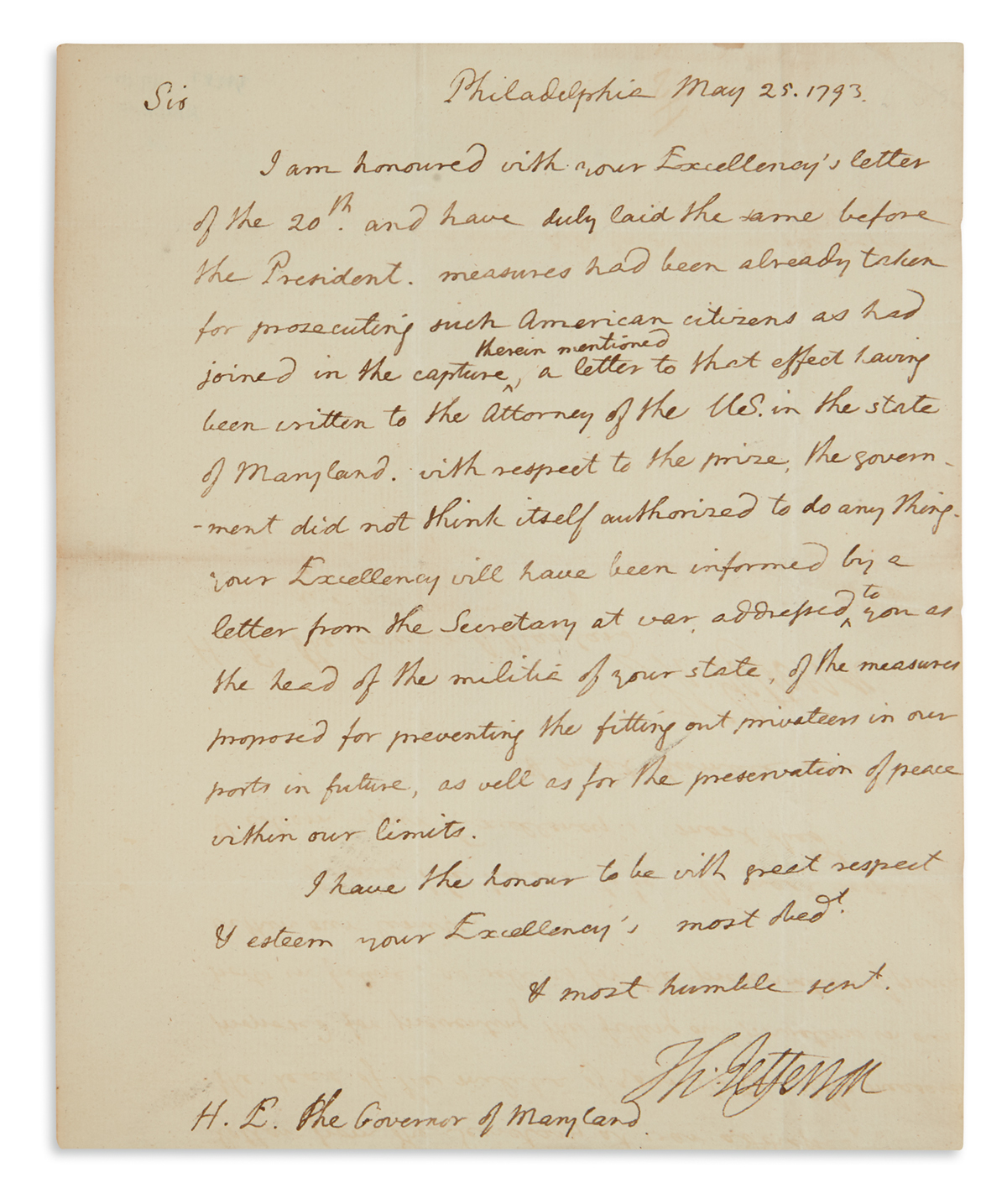