Maquette for Lazaretto: an installation about the current state of the AIDS crisis.

Provenance: Friend of the artist. Exhibited 'Soon All This Will Be Picturesque Ruins: The Installations of David Wojnarowicz,' P.P.O.W. Gallery, New York, July 12-August 24, 2018.

According to friends, the concept of Lazaretto came about during sessions of jocularity over cigarettes and bowls of chicken soup at a local restaurant in the summer of 1990 where Wojnarowicz and Marcus were doodling on the paper tablecloth with a crayon. Caricatures of political figures morphed into a 'ship of fools' inspired by Hieronymus Bosch's same-titled oil painting. The two artists knew that they wanted Senator Jesse Helms included on the ship and after a few meetings at a local East Village coffee shop the idea of an entire installation materialized. Wojnarowicz and Marcus went to Marcus' studio and created two maquettes, one of the boat, which included Wojnarowicz's toy skeleton and one of the figure in the water.


Wojnarowicz and Marcus were both represented by P.P.O.W. and were acquaintances at the High School of Music and Art. At that time and unbeknownst to Marcus, Wojnarowicz had been diagnosed with HIV. Both artists had witnessed how AIDS ravaged their community and lost friends to the disease. Marcus saw firsthand the devastating effects of AIDS while volunteering at a Bronx hospital. After Wojnarowicz's friend and mentor photographer Peter Hujar passed away from AIDS-related complications, Wojnarowicz's art became explicitly linked to the crisis, the suffering it caused, and the political inaction to bring relief.


Reflecting the gravity of the disease, the installation Wojnarowicz and Marcus envisioned would be unforgettable and monumental. Susan Pyzow, Marcus' wife joined in the collaboration and titled the exhibition Lazaretto for how society callously quarantined AIDS victims without concern or sympathy. Friends observed that Wojnarowicz especially worked feverishly to bring the installation to fruition as his body weakened by the day. As the exhibition opening neared, Marcus took on much of the responsibility for construction.


With firsthand knowledge of the horrors of AIDS, Wojnarowicz and Marcus began to collect accounts from community members fighting the disease. These stories of injustice, pain, and loss of dignity were plastered on the walls of a constructed claustrophobic maze within the installation. Not only did the maze include these messages of despair and trauma, but it also consisted of black plastic walls that simulated body bags. Viewers would be forced to meet the harrowing experiences of the victims head on as they navigated through it. A sickroom littered with pill bottles, garbage, and the refuse of a former life was constructed at the end of the maze. A skeleton of a young Black Hispanic woman lay in a cot while daytime programs played on a television, reflecting how society, unmoved, ignored the decimation. At the center of the installation was the 'ship of fools' ferrying grotesques of President George H.W. Bush, Cardinal O'Connor, and Senator Jesse Helms, all dressed in Ku Klux Klan hoods made of bills, across a blood red sea of desperately reaching human hands and blocks spelling out victims' names. The figures were caught in incriminating acts: Bush caught the severed hands with a fishing net while grinning and Cardinal O'Connor toasted the carnage with a glass of blood. Perhaps the most horrifying figure was Helms, who was devouring a Black infant, a comment on how minorities are especially ignored and marginalized when seeking HIV/AIDS treatment. A skeletal Christ-like figure with a crown of hypodermic needles was roped to the ship's mast. Surrounding the ship were hundreds of plaster cast arms with numbers on the forearms representing the ghosts of the deceased reaching out to the viewers. Drawing this reference from the Holocaust, the AIDS pandemic was compared to a genocide of the LGBTQ community and other at-risk groups which purposefully lacked a response from the most powerful institutions. In cruel irony, Louie Armstrong's 'What a Wonderful World' blared in the background and a jabbering Howdy Doody puppet danced in a case among dollar bills. The ship all at once represented the politics, discrimination, homophobia, and profit behind inaction, the immorality that lurks behind a moral façade, and the profound suffering as the end result. Outside of the elaborate exhibition were free supplies of condoms, needle kits, and informative pamphlets. The artists offered parts of the exhibition for sale with proceeds and donations benefitting AIDS organizations. The boat from the installation was never sold and was destroyed after the exhibition's tour.
Wojnarowicz had already gained international recognition for his avant-garde multimedia works and collaborations with well-known artists by the summer of 1990. In 1985, he was exhibited at the Whitney Biennial. However, the artists presented Lazaretto anonymously. Though Wojnarowicz's name would bring attention, it was felt that even more would be garnered by remaining nameless. The exhibition opened at P.P.O.W. on September 6 and ran through September 29, 1990. It was beyond impactful and was extremely well received by the public; admission lines wrapped around the block. The installation traveled nationally before ending its tour at the 'Art at the Armory: Occupied Territory' show at the Chicago Avenue National Guard Armory organized by the Museum of Modern Art in Chicago during which time Wojnarowicz tragically passed away from AIDS related complications on July 22, 1992. Eventually, the artists' names were revealed but the public outcry for a human response to the crisis and the activism spurred by the exhibition were already set in motion. 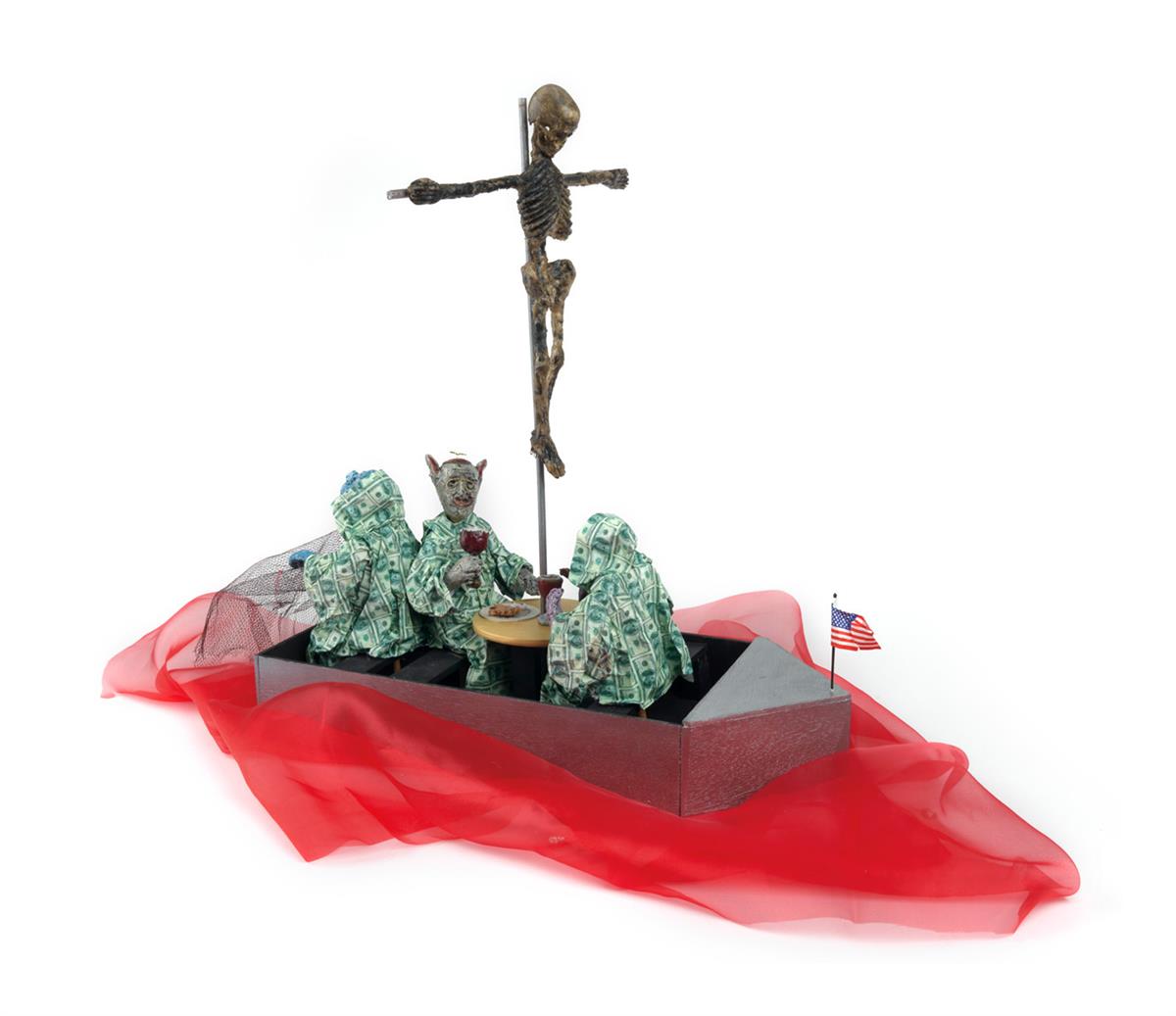