Price Realized: $ 5,600
Price Realized: $ 7,000
?Final Price Realized includes Buyer’s Premium added to Hammer Price
Estimate: $ 3,000 - $ 4,000
DESIGNER UNKNOWN SUNSET LIMITED / FROM WINTRY BLASTS TO SUNNY CLIMES. Circa 1896.
23x30 3/4 inches, 58 1/2x78 cm.
Condition B: restored loss in top margin; repaired tears through margins, slightly affecting image; discoloration in margins; tape on verso. Clay-coated paper.
A sublime, sophisticated and previously unrecorded poster featuring the Sunset Limited, which began operating between New Orleans and Los Angeles in 1894. The train consisted of five cars and completed the route twice per week. Built and put into service in 1896, the cars depicted here (El Indio, El Poeto, Epicure, El Astro and El Globo) ran during the Winter Season, from November to April. From 1898 to 1900, the train began its journey in Chicago due to a yellow fever outbreak in New Orleans. This transportive image is a visual fairy tale; the train soars over the curved earth beneath, which shifts from darkness into light, literally migrating from the East Coast to the West Coast as it leaves the chill of winter behind for warmer climes. Although unsigned, it is potentially the work of W.H. Bull, who designed many of the posters for the railroad during this period. The fact that this is a proof, with the printer's marks and color bars in the margins, suggests the reason for the image's rarity may be that while it was printed this time, perhaps it was never subsequently used as a poster. Although not recognizable in our present era, the building in the upper right corner is the New York World Building, built to house the New York World newspaper in 1890. Towering over City Hall, it was New York's first building to be taller than Trinity Cathedral, and it dominated the city's skyline at the time. It was demolished in 1955. rare.
Set Alert for Similar Items 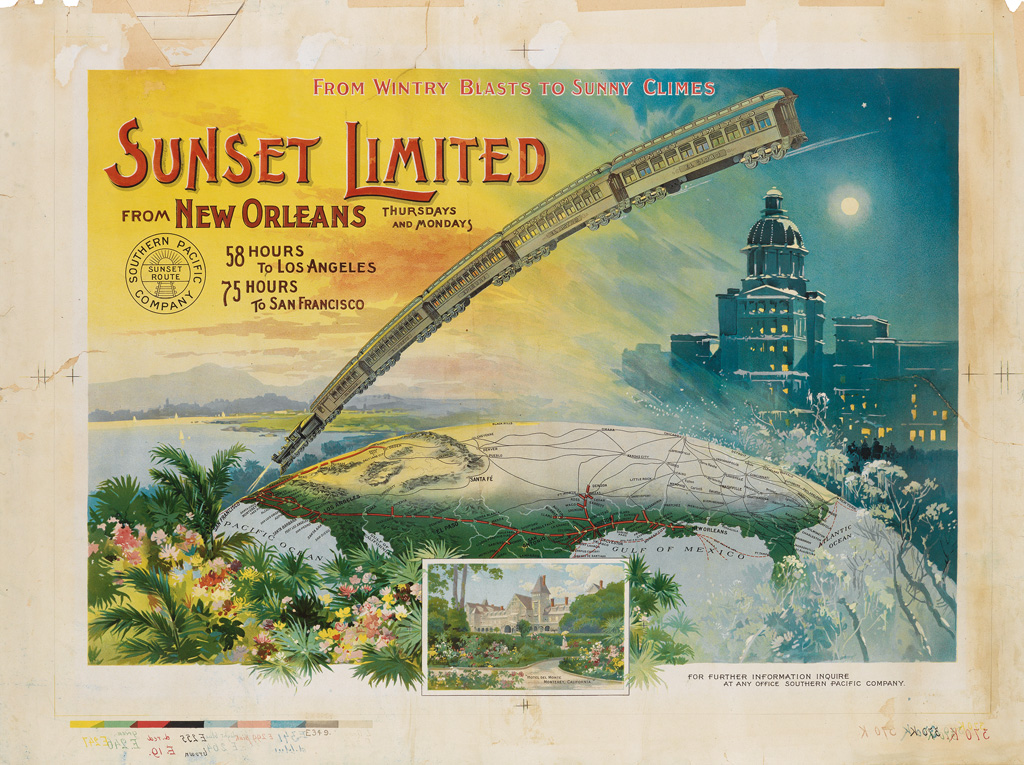