Dorothea Lange (1895-1965) began her career as the principal of a portrait studio, photographing San Francisco's elite families. Her aesthetic awareness of design, composition, and the subtleties of light, the agent of photography, was matched by a keen sensitivity to the human condition. An ambitious young woman, Lange's immediate social circle included Imogen Cunningham, Anne Brigman, and Consuelo Kanaga. Cunningham's accomplishments as a young chemist, working with Edward Curtis, Brigman's association with Alfred Stieglitz, and Kanaga's focus on political engagement helped to shape Lange's distinctive personality, which friends had characterized as "charismatic."

At the outset of her career Lange did not consider herself an artist. But her thoughtful approach to making pictures ground her in a tradition that pre-dates photography's acceptance as legitimate form of artistic expression. She wrote, "While there is perhaps a province in which the photograph can tell us nothing more than what we see with our own eyes, there is another in which it proves to us how little our eyes permit us to see." Eventually Lange's natural affinity to connect with people led her to transition from commercial portraiture to documentary photography. Her earliest images were shot near her studio and included the famous White Angel Breadline (1933). Subsequently she traveled for the Farm Security Administration and shot one of the greatest pictures of the 20th century, Migrant Mother (1936), a study of Florence Owens Thompson with her young children at pea pickers migrant camp.

Lange fervently believed in photography as a tool for social change. After an early marriage to the painter Maynard Dixon, whom she divorced in 1935, Lange married the progressive agricultural economist Paul Schuster Taylor. They formed a professional partnership that lasted until her death. As a writer-photographer team, they collaborated on a popular publication about migrant workers during the Dust Bowl entitled American Exodus (1939), a beautifully designed book that featured Taylor's descriptive text and Lange's richly printed photographs.

In 1941 Lange received a Guggenheim Fellowship, the first woman awarded the honor. Shortly after, when Japanese-Americans were involuntarily transferred to Manzanar, an internment camp in California, Taylor and Lange were among those protesting mass incarceration of American citizens. Lange, on assignment for the War Relocation Authority, photographed families, each member with an ID tag and dazed expression, as they were rounded up by soldiers and ushered on to buses and trains. She later visited the camp and recorded detainees adjusting to daily life in the facility. Lange's pictures reflected her political outrage. Subsequently the federal government seized her negatives, which were labeled "classified" during wartime and secreted away.

Lange, who had survived childhood polio, had difficulty walking. In the 1950s, as her health deteriorated, Taylor was offered a new position at the U.S. State Department that presented an opportunity to travel to Asia. Taylor, the academic-cum-activist, had long sought to effect democratic land reform in countries throughout the globe. Although Lange understood that her role was largely that of a diplomat's wife, she purchased a 35mm camera in anticipation of the journey, planning to photograph throughout the trip. In 1958 the couple traveled extensively for eight months, visiting twelve countries.

Despite the poverty and trauma Lange saw throughout the 1930s, and the suffering in Manzanar, she was unprepared for the utter misery of Korea. After the invasion of South Korea, ensuing Civil War from 1950 to 1953, and president installed by the U.S., the country was ravaged by ethnic cleansing. Children were abandoned and racism was rampant. Lange, distressed by the dire situation she saw everywhere was aggravated that she, an American tourist, had special privileges. Her photograph of a young Korean child in a torn and soiled t-shirt fastened with a safety pin, his eyes closed, was cropped from a larger picture of a classroom setting. The child was one of ten kids in the original frame, each of whom appears disinterested in the photographer and her camera.

This consummate humanist portrait, made without the benefit of a telephoto lens, reveals Lange's mature vision. Her approach pays homage to Lewis Hine, who was another early aesthetic influence. Like Lange in the 1930s-40s, Hine employed a Graflex camera during the years he documented child workers. Due to its technical limitations he also shot group portraits with a focus on a single child, who was later highlighted in white gouache or cut-out and placed in montages.

Korean Child was recognized as a masterwork by John Szarkowksi, curator at New York's Museum of Modern Art, who was responsible for Lange's retrospective, in 1966. Szarkowski featured the image on the front cover of the exhibition catalog. The photograph reproduced on the rear cover was Hand, Indonesian Dancer, Java (1958, lot 149). 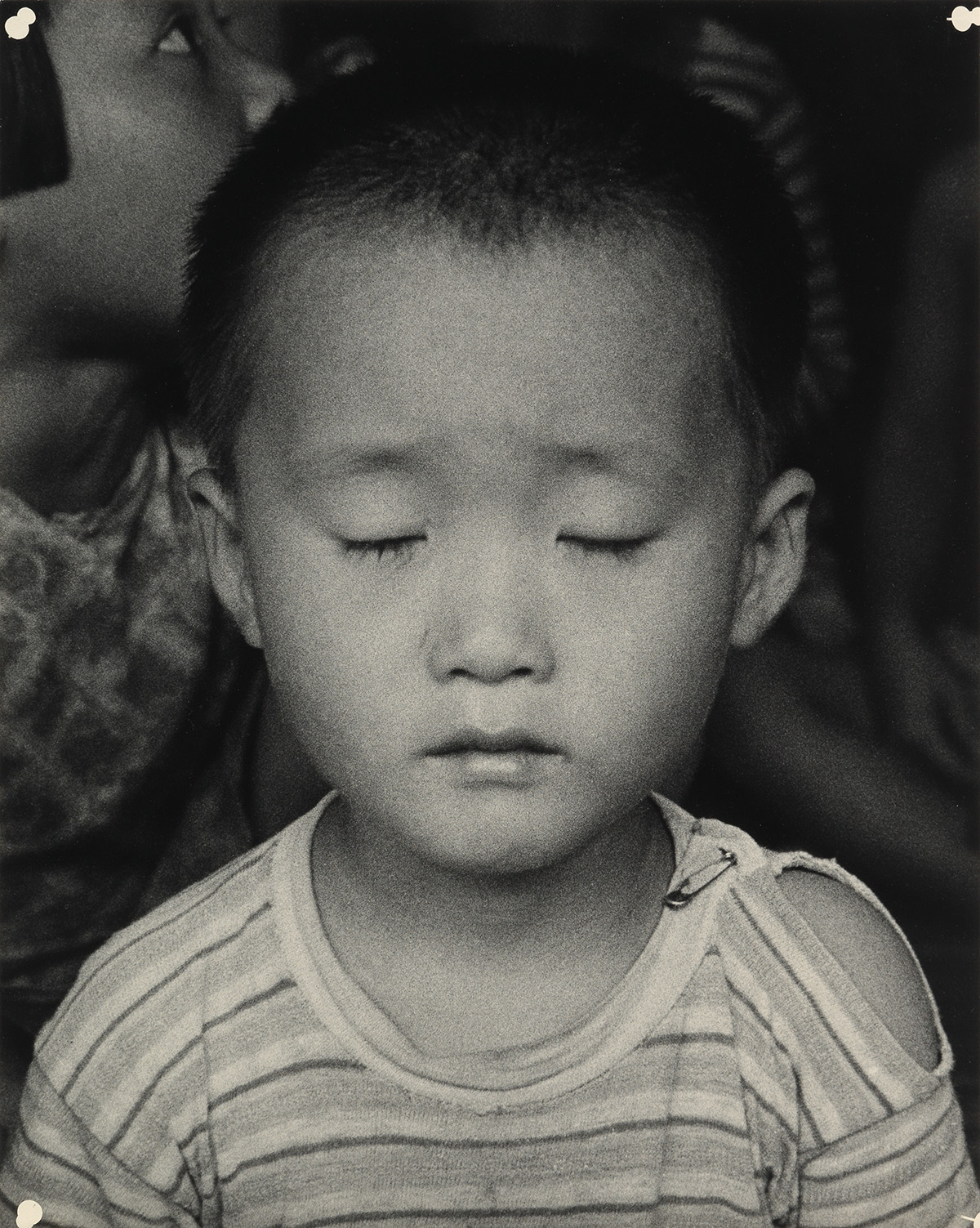