19 November 1951, ALS: ". . . I received to day the wonderful book of Mr Dan Rich on Degas and I enjoy to read with great attention the text of Mr Dan Rich, I am very interested by this text. I am still very busy and have to run the town to get the equipment for my loft and all the necessities to work (I use unusual materials and unusual equipment to paint, and cannot find it at the ordinary dealers of art supplies) but now I am beginning to work . . . ."
23 December 1951, AMS, a description of his 1950 lithograph series entitled "Corps de Dames," in French.
24 December 1951, ALS: ". . . I sent you to day a series of 16 lithographs 'Corps de Dames.' These lithographs had been made for a book I intended to publish, but I gave it up, and have only 3 series printed, and the stones destroyed.
"Sidney Janis came to our place yesterday evening . . . with his wife . . . and a guitar; and they sang together . . . very pretty songs. . . ."
13 January 1952, ALS: "I am working very hard at my painting . . . . Every day from early morning till night comes, without stopping a minute. It is question, especially, of desertic landscapes, which fascinate me very much. . . . Most of the paintings I had done in New York in last November . . . were spoiled and lost, because of a bad material I had used. . . . I shall send you a picture soon. Some are . . . not completely finished, maybe (I am never sure if a picture is good or not; I am always afraid to delude myself about a picture; I want to look at the picture a certain number of weeks, and live with it a little while of time, before deciding it deserves to be kept). . . ."
24 January 1952, ALS: ". . . The exhibition of my paintings at the Pierre Matisse Gallery will open at February 12th. The Matisses are now in Paris and will be back at the end of January. . . ."
25 January 1952, ALS: "I was very happy to day obtaining a painting of which I am very satisfied. That are the joys of a painter's life when he succeeds catching something like that . . . . It is a sort of desertic stony landscape, with, in the same time, something like metaphysical--in the style I have done several . . . (several will be exhibited at the Pierre Matisse Gallery next month) but this one I finished to day seems to be specially effective. I wrote a dedicace to you in the sky of this painting, and I gave it this title: 'PAYSAGE PHILOSOPHIQUE A MAURICE CULBERG.' . . ."
3 February [1952], ALS: ". . . I have made a lot of paintings and I like them very much. They are large landscapes, made with big empastos [sic] and embossments, evoking desertic waste-lands, steep rocks, uninhabited and inaccessible places. It's funny to come in the biggest town of the world to paint this views of no-man's lands. . . ."
16 November 1952, TLS: ". . . I left off doing those 'grounds' with big empastos and thick materials, that I made in a great number during last summer; I am doing now quite different things, on canevas [sic], and much more light, with brighter and less severe colors.
"Also I have made last summer large drawings. Pierre Matisse bought some of them . . . to be sent to New York with the paintings that he had also bought . . . ."
4 July 1952, TLS: ". . . A large important exhibition of my paintings (from 1942 till 1953) is planned to take place in Paris in next November. There will be more than 80 pictures there. I don't know if it will be a success or a fail. Some people like my work very passionately here, but a great deal of people (especially among the circles of professional artists, art-dealers, art-critics, people of museums) hate it furiously. I must say I was never comrade with them, was always living very apart and alone, and speaking often of them and their art in a very sarcastic way, and they don't like it. They feel that I am not on the same side of the ship, and they are right, I think. . . ."
with--Group of over 30 letters to Maurice Culberg from art dealers, museums, and others, including Pierre Matisse, Sidney Janis, and others, many with invoices for the purchase of artworks by Dubuffet, Léger, and others. 1949-85.
Provenance: Ruth Culberg; thence by descent to Franka Culberg Vlack; thence by descent to the present owner. 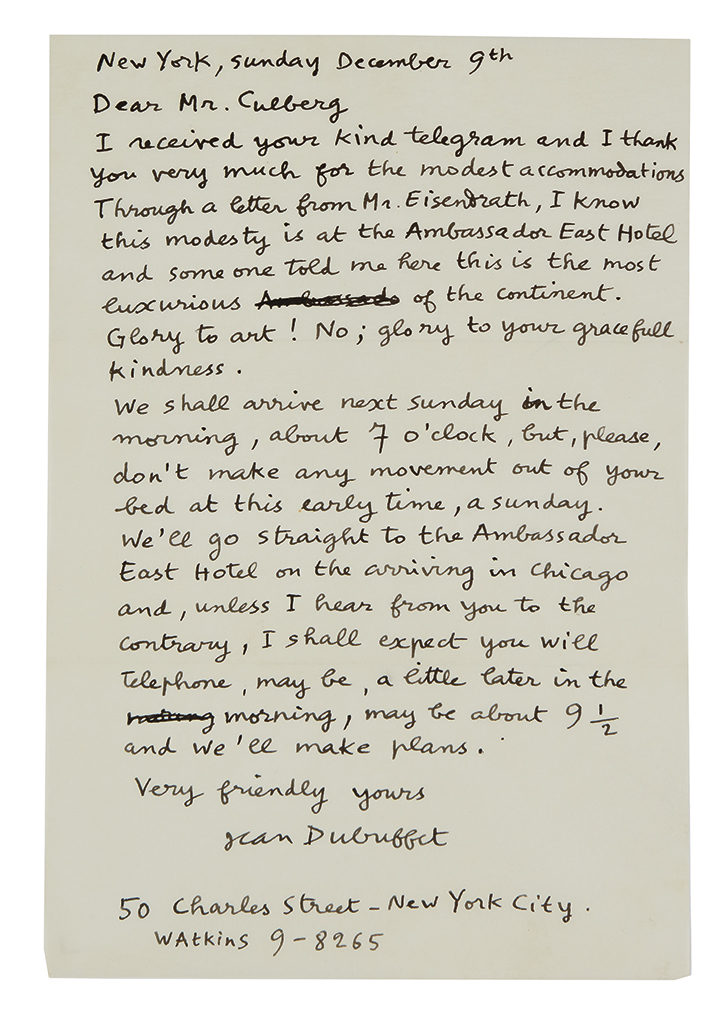