This young man (not named in our catalog because he was not a public figure) began this diary in the navy, working at the neuro-psychiatric ward in a naval hospital in San Diego. The bulk was written in 1948, spending a spring semester enrolled at Arizona State University in Flagstaff and then off to the beaches of Los Angeles.

The author often annotated the diary with sequential circled numbers in the margins. For example on 9 May 1948 in Arizona, he wrote "met a rebel named Preston & spent the nite out at Barker's Village," noting it with a circled "18." On 17 May, "met two Navy men, Art & Ralph. . . . They came in & Art & I went to the museum for a drink. We later met Ralph. Then home--very late to bed." This entry earned a circled "19" and "20." On 22 May "went into town for a final night in Flag[staff]. The usual # of drunks, Indians & cowboys, etc. Fooled around & then slept in penthouse of Bury Hall." A circled "22" is next to this entry. Visiting Tucson on 17 June, "met a Bill J from Houston and we fooled around until I left at 9:30." This was number 25.

He spent the summer of 1948 in Los Angeles, where he became less cryptic. On 24 June 1948, "read a marvelous book 'The City and the Pilar' by Gore Vidal. I want to buy a copy as it is something, for me, of a textbook." "The City and the Pillar" was the most prominent novel of its era to feature a gay protagonist. He added (with circled numbers "27" and " 1/2"): "Slept out one night in Venice . . . God! What a life! I want to stop being so damned foolish and wait for the right one. . . . I feel like an imposter among imposters, yet am not a member elsewhere! . . . There are three people here whom I think quite nice and not so ordinary as most of these faggots."

Our diarist had little income and sometimes slept on the beach. On 25 June 1948, he circled a "28" after writing "Listened to music at Zanzibar, was done for trade & then home." The next day, he notched 29 and 30: "Oh, if only one event hadn't happened! I hope I'm not going to the dogs and can maintain control of myself. Feel so disgusted and ashamed, all the way through. Got into town & . . . fooled around--Army--was trade again." He soon stopped numbering his encounters. On 2 July, "We went down to the Square, the Circle, Maxwell's, etc. What places those are! All the mad faggots in town gather and laugh & be aloof with/to each other." On 7 August, "spent last night on the beach. Rather tiring. I was trade."

Our author began taking classes at UCLA, in 1949 transferred to Arizona State University, and announced proudly on 31 January 1950 that he was awarded his Bachelor of Science degree in Social Welfare. A long entry in February 1952 documents his return to California, where he found himself "an habitué of Dopey's, fountain hangout of the Ocean Park Shady Side: queers, mugs, whores, beauty parlor operators, pimps, gamblers, police & a few neighbors who just didn't care. Dopey was a big fat character who lived over the fountain. He used to drag his tricks up there. The apt. had a peephole & often he would let friends use it & then watch their performance through the hole." He also describes a violent incident at a drag ball where a thug attacked one of the performers: "We hid in an irrigation ditch & the rest of the summer were scared of Sonny."

Tucked into the diary is a small photograph of the author. It is unsigned, but matches a portrait of the author in a drum major competition which appeared in a 1941 newspaper (copy enclosed). 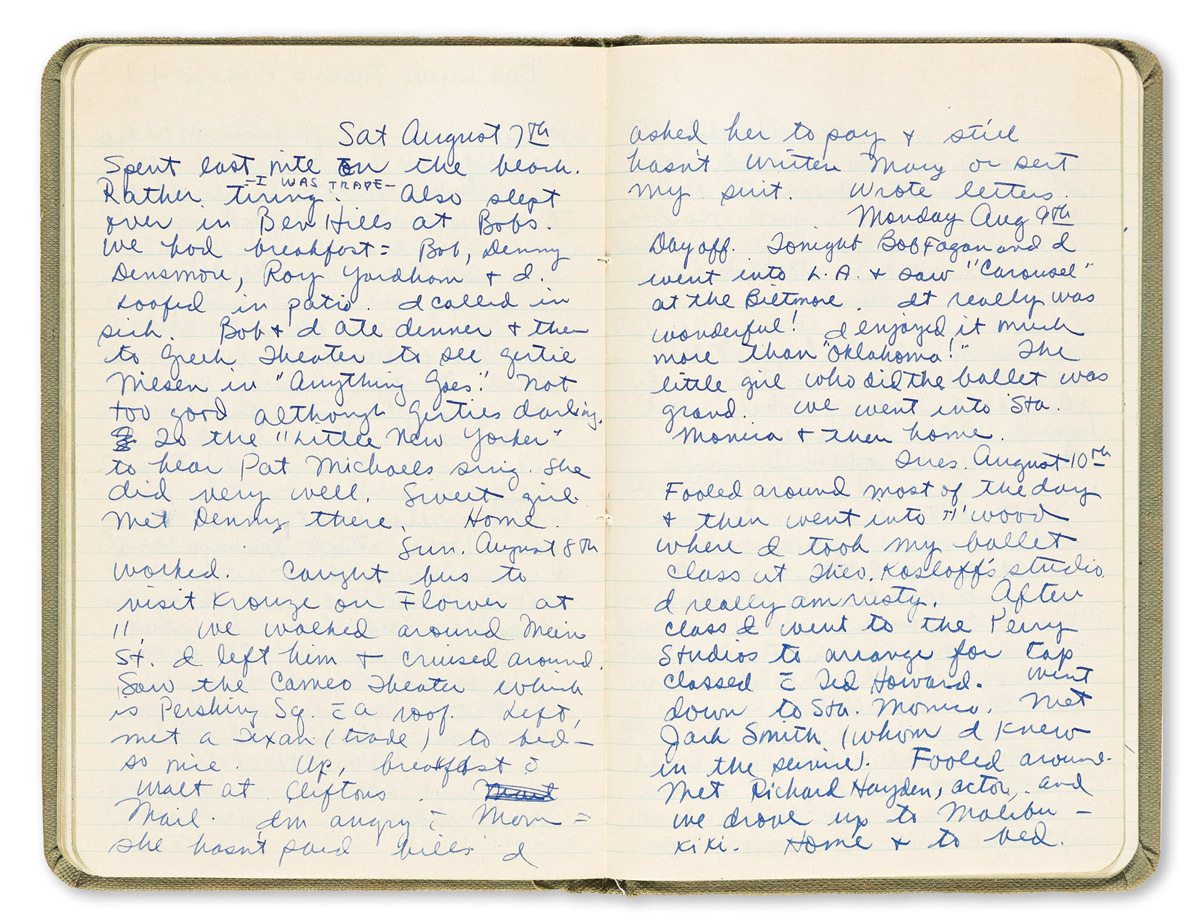