Exhibited: Boston Art Club, January 17 - February 14, 1891, with a fragment of a label on the frame back; The Providence School: Gritting, Imaginative and Enduring, Bert Gallery, Providence, RI, July 11-August 24, 2019; "My Greatest Successes Have Come Through Her": the Artistic Partnership of Edward and Christinana Bannister, Gilbert Stuart Museum, Saunderstown, RI, June 9 - October 8, 2018.

This beautiful and atmospheric landscape of a lily pond and bridge by Edward M. Bannister is a significant work from his mature, late period. It was shown at the Boston Art Club, where Bannister was a frequent exhibitor.

Born and raised in Canada, where the British had abolished slavery, Edward Mitchell Bannister was able to demonstrate and develop his talent at a young age. Working as a seaman, the young man travelled the Northeastern coast until he found work in the arts hand-coloring daguerreotypes in New York. In the early 1850s, Bannister established himself as a young regionalist painter in Boston, one of its first African-American artists. He studied at the Lowell Institute, and received his first commission in 1855. In 1870, Bannister and his wife moved from Boston to Providence, where he became an active professional artist and respected leader in the artistic community.

Bannister famously won first prize in painting at the U.S. Centennial Exposition in Philadelphia with Under the Oaks in 1876 - beating out such established figures as Albert Bierstadt and Frederick Church. He had other successesith awards in Boston at the Massachusetts Charitable Mechanics Association in 1878 winning bronze, and in 1881 and 1884 winning silver. Bannister also helped found the Providence Art Club in 1878, which became the model for the Rhode Island School of Design. In his Barbizon-like landscapes, he produced a poetic view of tranquil lands with people and animals in harmony. According to John Nelson Arnold, a fellow artist and friend, "Bannister looked at nature with a poet's feeling. Skies, rocks, fields were all absorbed and distilled through his soul and projected upon the canvas with a virile force and a poetic beauty." Lewis, p. 38; Rodgers p. 12; Salado Historical Society (brochure) p. 33.

We would like to thank art historian and Bannister expert Anne Louise Avery for confirming and that it will be included in her forthcoming catalogue raisonné.
Set Alert for Similar Items 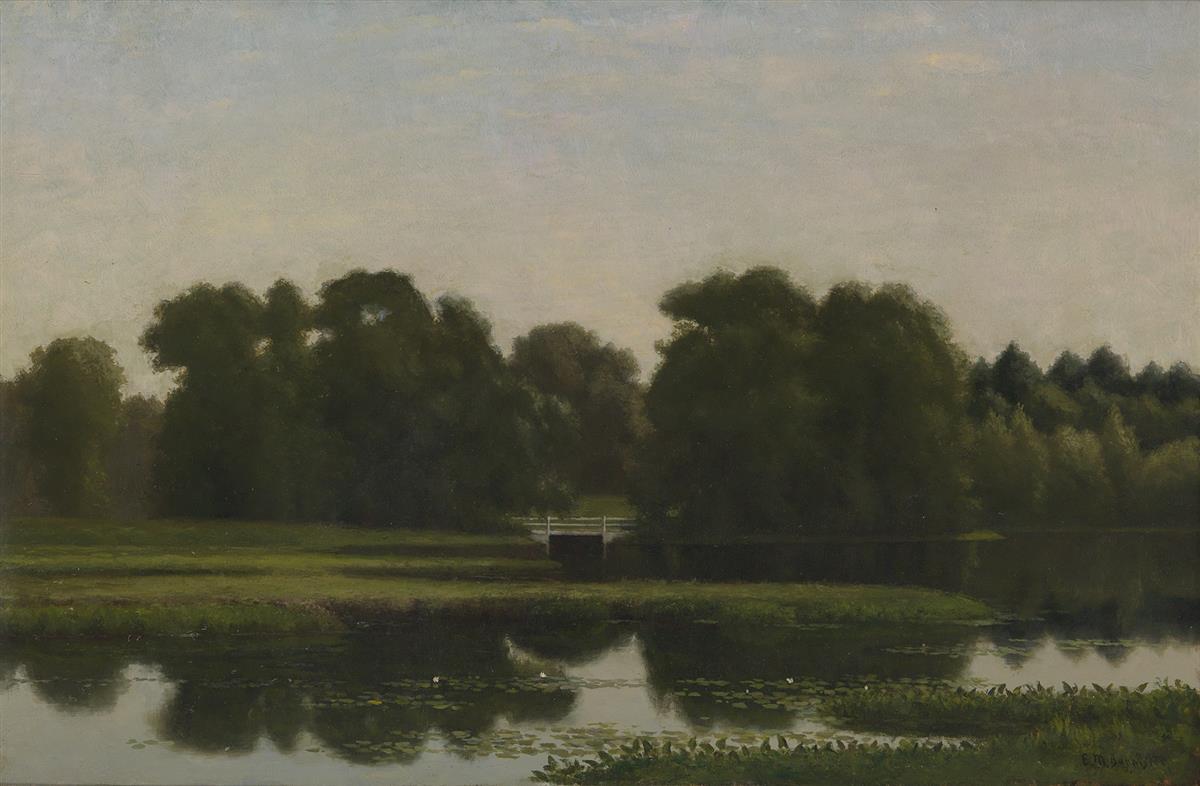