Sea of Time is a beautiful and important painting by the artist - the most significant work by Eldzier Cortor to come to auction. Sea of Time was painted shortly after Eldzier Cortor's Julius Rosenwald Fund grants of 1944 and 1945 to study the unique culture of the Sea Islands.

Sea of Time is a haunting depiction of an African-American female nude with a fascinating mixture of symbolist and surreal elements. In the Gullah culture of the Sea Islands, off the coast of Georgia and South Carolina, Cortor found many African traditions were preserved in its small, isolated African-American communities. Lisa Gail Collins in her essay Visible Roots and Visual Routes: Art, Africanisms, and the Sea Islands describes how the symbols found in Sea of Time derive from Gullah and African traditions - birds represent a Yoruba deity of herbal medicine, a healer of the mind, shells were thought to contain souls, and scraps of newspaper was used to distract and deter evil spirits. Cortor was also awarded a Guggenheim Fellowship in 1949 to Jamaica, Cuba, and Haiti, and to teach at the Centre d'Art, Port-au-Prince, Haiti, from 1949-1951 - each period increased his awareness of the cultural legacies of the African diaspora, and further informed his painting.

Sea of Time shows Cortor in mid-career form in the postwar period, having made the transition from the social realism of the WPA period. This enigmatic and elegant painting includes all the draughtsmanship, interest in the beauty of black women and attention to detail that Eldzier Cortor is celebrated for. Cortor now paints his celebrated Southern-themed scenes in a dark, almost Gothic atmosphere - most notable in his nocturnal paintings, the iconic Southern Gate, 1942-43, the Smithsonian American Art Museum, and other paintings like The Bathers, 1944. Cortor was featured and Southern Gate was illustrated in color in a July 22, 1946 LIFE magazine article on award-winning African-American artists. Within his 1940s subjects, Cortor further experimented - contrasting thick textures of paint accumulations with the flattened forms and silhouettes - seen here in Sea of Time and in such later works as Environment, 1948, the Museum of Fine Arts, Boston. Collins pp 83 -85.
Set Alert for Similar Items 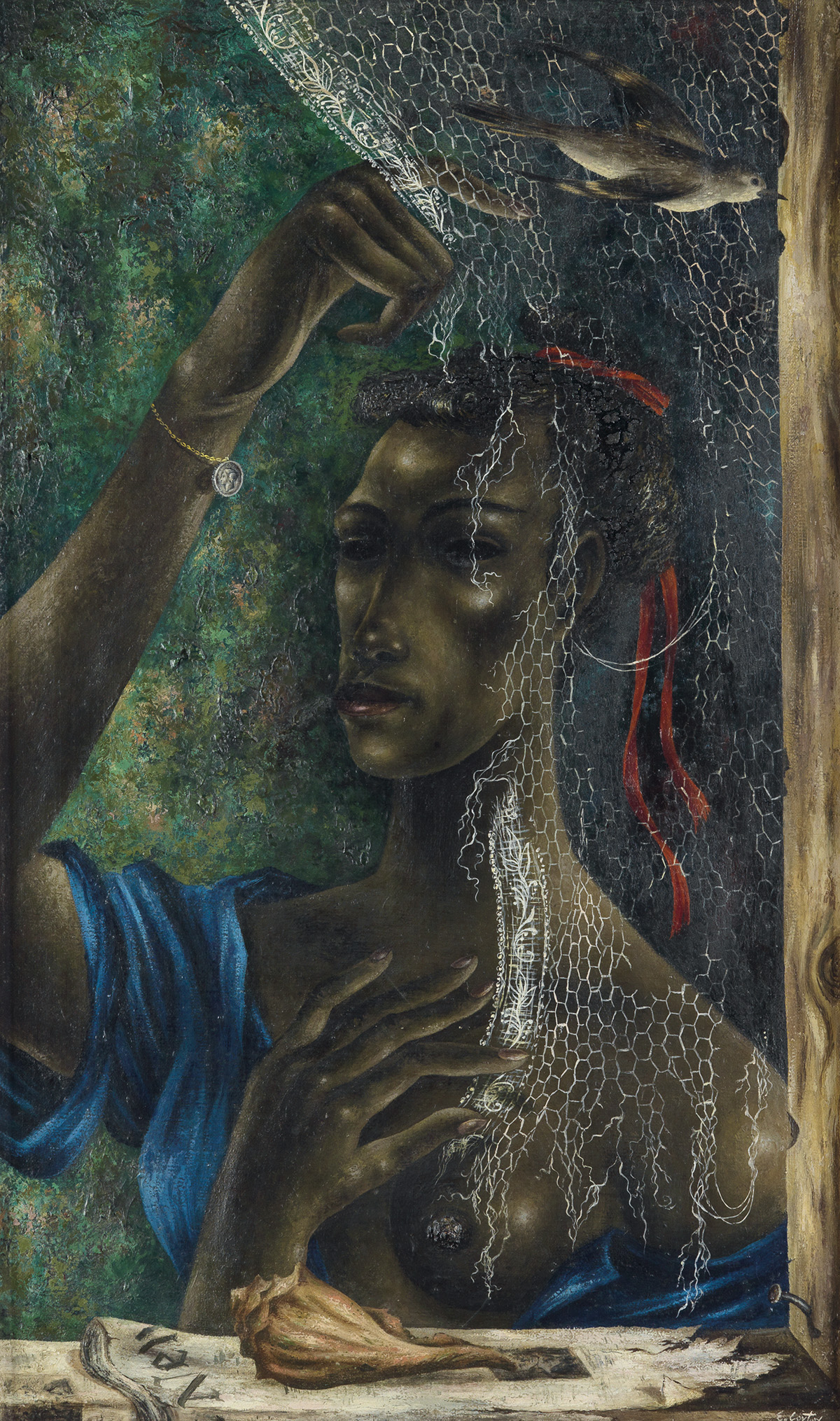