Provenance: gift of the artist to Joe and Reva Bernstein, San Miguel de Allende, Mexico, circa 1960; thence by descent to the current owners, New Mexico.

The model is art educator, writer and actor, Joan Delores Sandler, born on October 2, 1934 in Harlem, New York. Sandler was a friend of artists Elizabeth Catlett and Romare Bearden while becoming a political activist involved in the peace movement. In the early 1960s, Sandler began studying theater with the Negro Ensemble Company and landed a role on the television drama series, Black Girl. She began her art career in 1975 as a program specialist for the New York City Department of Cultural Affairs. Sandler later worked for the Black Theatre Alliance, Fundraising in the Public Interest, the Metropolitan Museum of Art, the National Endowment for the Arts and the Museum of American Folk Art. In 2001, Sandler served as executive director of the Bearden Foundation, and has been an advisor to many foundations and grant-making organizations.

This large and majestic torso of an African-American woman is an important work in the artist's development as a sculptor. Joan conveys a modern image of a woman, and the sensibility of a woman artist. In Melanie Herzog's Elizabeth Catlett An American Artist in Mexico, Catlett describes her work as representations of women, black women and herself - "I am a black woman. I use my body in working. When I am bathing or dressing, I see and feel how my body looks and moves. I never do sculpture from a nude model ... Mostly I watch women." Catlett now blends stylization with natural observation to reveal an expressionist study of the female form and of African-American beauty.

Joan displays the growing modernity of the artist's representation of women. By 1960 Catlett had begun to incorporate a degree of stylization that now represents the beginning of her mature style. Herzog characterizes these changes in another torso, the later Mujer in mahogany from 1962; she describes Catlett combining "proportions based in the reality of woman's bodies" with "generalized forms" and "geometrizing simplification." Joan's beauty also is modern in the sense that despite her nudity she is neither sexualized nor passively posed. She leans forward with an asseritveness, aware of her womanhood and its power. As Lowery Stokes-Sims makes clear, "in Catlett's oeuvre, the female form is never gratuitously erotized, but analyzed and defined for its manifestation of fecundity and strength." The terracotta's earthiness, its unpolished texture and warmth make Joan a veritable force of nature. Catlett's Joan is certainly an eloquent and modern expression of female strength, and one of the artist's great achievements in terracotta. Herzog pp. 122-23.; Sims p. 5. Biography, courtesy of thehistorymakers.com.
Set Alert for Similar Items 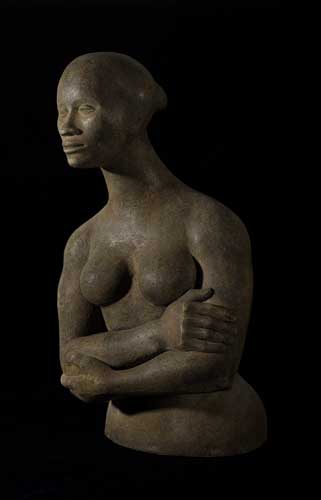