Provenance: acquired directly from the artist; Earl and Nancy Wilkie, the estate of Earl A. T. Wilkie, Philadelphia; private collection, Philadelphia (2010). Philadelphia artist Earl Wilkie (1930 - 2009) was a sculptor, primarily in wood, and a career administrator of the nonprofit Elwyn Institute. He earned an MFA in visual arts from the University of Pennsylvania in 1972, and was part of a circle of Philadelphia artists that included Joe and Ellen Powell Tiberino in the Powelton Village scene of the 1960s and 70s.

This experimental, multimedia artwork is a very scarce and significant example of Elizabeth Catlett's unique work on paper. It is a powerful representation of the violence faced by those who protested during the Civil Rights era. Catlett's work in the late 1960s and early 1970s shared a political consciousness with and was made in direct response to the events and figures of the Black Power movement. Many of her iconic, major works in both sculpture and printmaking came out of this richly creative, mid-career period, including the sculptures Black Unity, 1968, Homage to my Young Black Sisters, 1968 and Political Prisoner, 1971 and the linoleum cuts, Malcolm X Speaks for Us, 1969 and Homage to the Panthers, 1970. In the early 1970s, Catlett continued to address the costs of the struggle to the African-American community; her prints Watts/Detroit/Washington/Harlem/Newark, 1970, and The Torture of Mothers, 1970, show the victims of police shootings and brutality.

This work on paper gives us a window into the innovative side of Catlett's work on paper. Catlett only exhibited her prints in the postwar period - one rarely sees any unique works on paper past the midcentury. With mutiple techniques from drawing and printmaking, including ink roller, monotype, wash, and paper collage, Catlett shows more of the experimention behind creating her powerful subjects. The images of the two girls being sprayed by fire hoses are drawn in elegant silhouettes, and then mirrored above in more abstracted forms. Catlett often repeated images with multiple printings from the same block - she continued this practice in There is a woman in every color and Man, both linoleum cuts from 1975. A similar composition and stylization of the figures also appears in Catlett's later color lithograph Blues, 1983.
Set Alert for Similar Items 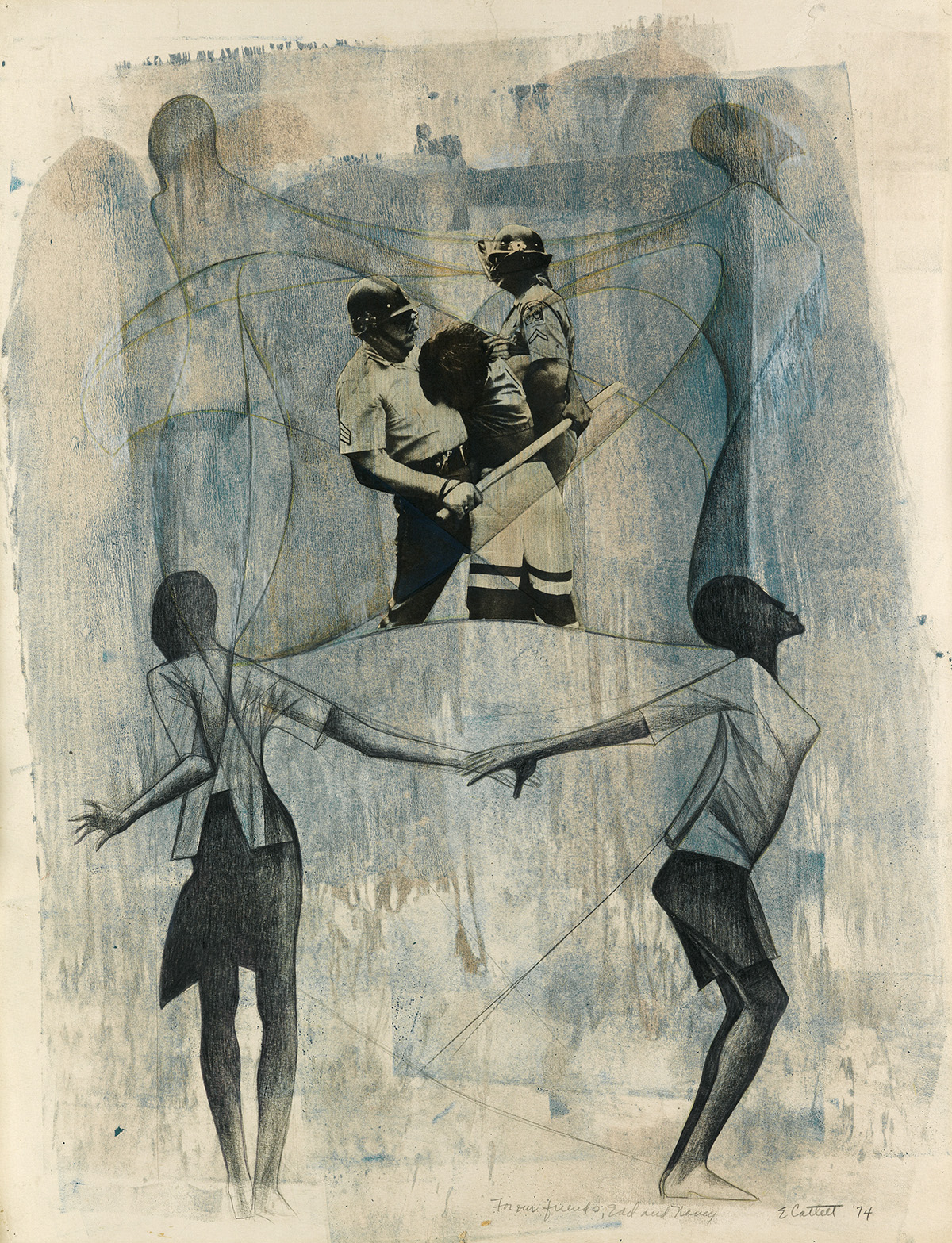