This important Studio Museum exhibition was the artist's first solo exhibiton in the United States since 1948. Elizabeth Catlett had not been able to visit the United States since 1961 due to her being labeled a communist, and the hostile reception of the U.S. Embassy in Mexico. Her visa was finally granted in 1971 only after a year long campaign, and was restricted to her attending the opening and an approved itinerary.

Recognition is a striking sculpture that epitomizes Elizabeth Catlett's masterful mid-career work, and makes a powerful figurative statement. By 1970, Catlett had successfully incorporated more abstract qualities and social commentary into her sculpture. Recognition aesthetically speaks eloquently to the bonds of relationships and our interdependence. The title reinforces the social and political consciousness of the times. Jeff Donaldson's commentary in the Studio Museum catalogue strongly reinforces this sentiment - "Black and Third World Peoples need to be made actively conscious of their commonality of heritage and interests" .

Recognition's beautiful natural material gives it additional meaning. This Mexican marble has deep tonal qualities with densely woven veins throughout - distinguishing it from the two other versions of this subject, a translucent orange onyx, also from 1970, and the later highly polished black marble from 1972. Catlett's work in marble, onyx and mahogany were all chosen to bring out the most of the material's inherent beauty, and relate the work to their historical sources--African and Mexican indigenous art. Here the exotic material and the curved forms relate this form to ancient Olmec sculpture. According to Melanie Herzog, this attention to the natural material was very deliberate; Catlett stated, "I like to finish sculpture to the maximum beauty attainable from the material from which it is created." Elizabeth Catlett later would use Recognition to describe her process to Samella Lewis in carving stone sculpture - "When I began my work on Recognition, I knew that I wanted to use a triangular piece of onyx that I had in my studio. Even though I had the stone and could envision the shape of the work, I preferred to make a small model." Her small clay model is illustrated. Lewis pp. 88-89, 189; Herzog pp. 150-51, 153-54.
Set Alert for Similar Items 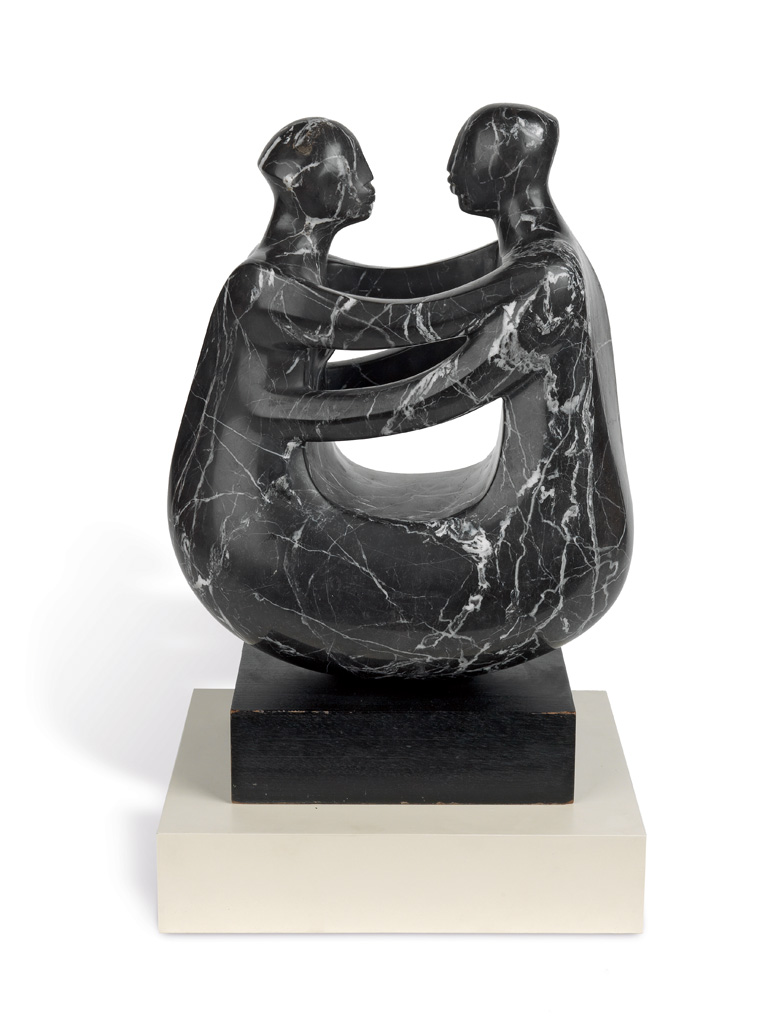