Color woodcut, with the ink brushed on the block and printed in the manner of a monotype, on cream laid paper, 1919. 460x325 mm; 18 1/8x12 7/8 inches, full margins. Third state (of 3). Signed in pencil, lower right. A brilliant, richly-inked impression of this important woodcut with strong, richly-applied colors and the brush marks from the ink application distinct.

Heckel (1883-1970) was born in Döbeln, Saxony and for a short period studied architecture at the Dresden Polytechnic Institute. While he never completed his studies, during this time he met Ernst Ludwig Kirchner, Karl Schmidt-Rotluff and Fritz Bleyl who, like Heckel, sought to be full-time artists rather than working architects. Together they founded Die Brücke in 1905, an artist's group that rejected traditional artistic styles and found inspiration from a variety of sources including modern trends like Fauvism and artists such as Vincent Van Gogh and Edvard Munch as well as medieval art and Northern Renaissance artists like Lucas Cranach and Albrecht Durer. They adopted the name Die Brücke as they were forming a bridge between prior and current artistic traditions.

The woodcut medium was especially important for the members of Die Brücke. Having had a long tradition in Germany, the artists revived it, favoring it for its roughness and as a means for radically simplifying and flattening compositions with bold, flat colors. While the group members created many woodcuts, Heckel was among the more prolific proponents of the medium and made more than one thousand prints over his career, largely during the first quarter of the 20 century.

During World War I, Heckel was stationed in Belgium with a Red Cross medical corps led by art historian Walter Kaesbac. Kaesbac managed the schedule so Heckel had time to paint and make prints. During the war and postwar years Heckel created many portraits and self-portraits, highlighting the isolation and melancholy of the time. Männerbildnis is the pinnacle of these, made a year after the end of the World War I. Rendered in his typical flat style (finding inspiration also from African masks) Heckel illustrated a weariness that was not only personal but national. His troubled and his uneasy expression expresses the toll of the war and the uncertainties of the years to come.

Heckel continued to work in Germany for the remainder of his career, and in 1937 the Nazis labeled him a 'degenerate' artist, destroying his studio and confiscating his works from public collections. Dube 318.
Set Alert for Similar Items 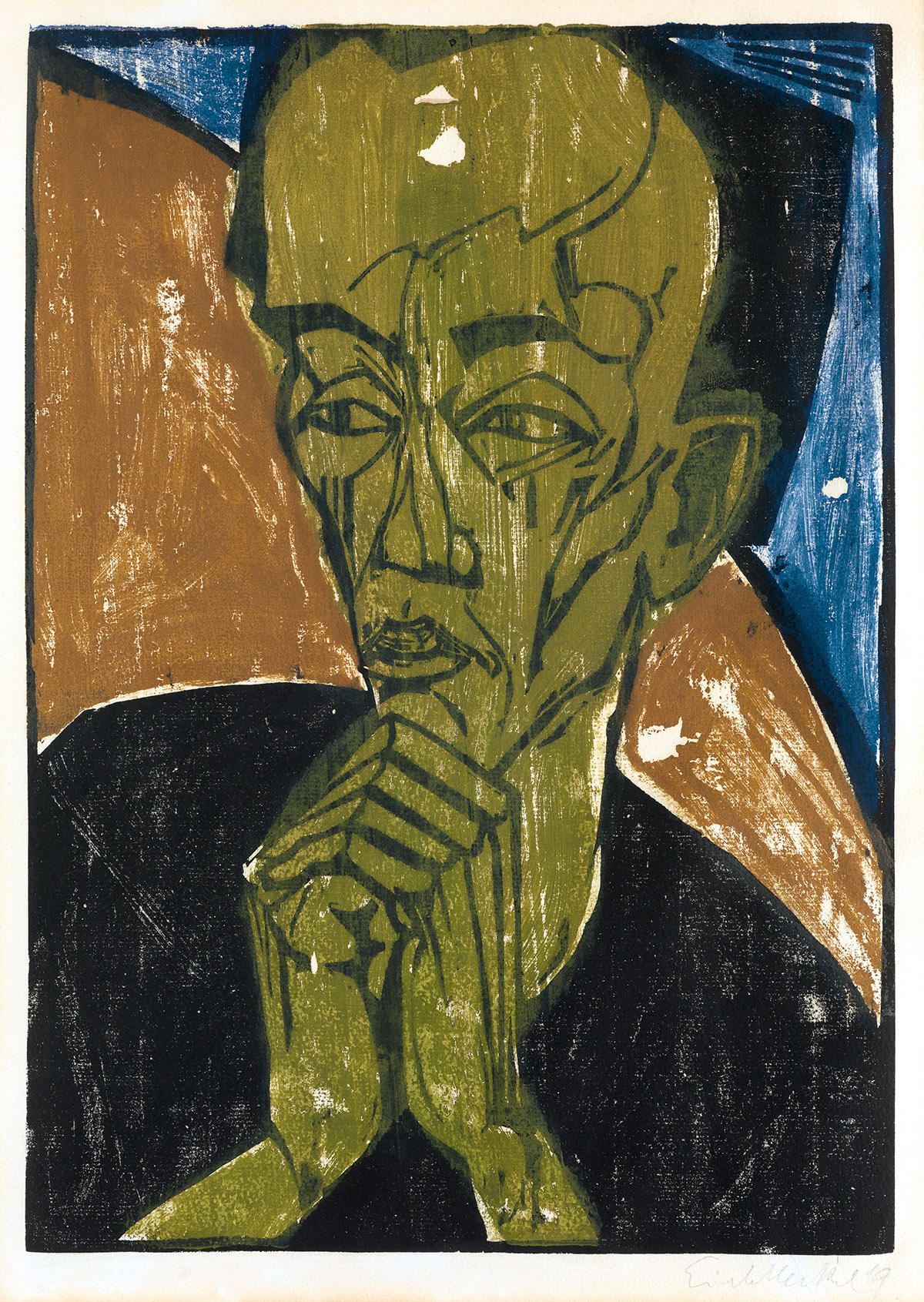