Price Realized: $ 11,000
Price Realized: $ 12,650
?Final Price Realized includes Buyer’s Premium added to Hammer Price
Estimate: $ 8,000 - $ 10,000
ETOILE DU NORD. 1927.
41x291/2 inches. Hachard, Paris.
Condition A-: repaired tears, creases and overpainting in margins.
L'Etoile du Nord (The North Star) was an absolute revolution in advertising when it first appeared in 1927. Although advertising a Pullman train, it was startlingly new to have a travel poster that depicted no landscape, no destination, and no train. The pure and powerful image is a tribute to the dramatic use of perspective, with the train, represented allegorically by the actual astral object, dancing on the horizon where many rails are converging in the distance. To keep the image as clean and unobstructed as possible, Cassandre corrals the typography at the very bottom of the image and then organizes it in a neat and structured way, like a frame, around the outside of the image. Here he also develops one of his signature design elements: viewing an object from a low angle to make it seem larger than life and more impressive, a technique he perfected in his 1935 poster for the Normandie. Through his association with Maurice Moyrand, who was the agent for the printer L. Danel (and with whom he would form the Alliance Graphique in 1930), Cassandre was commissioned to create two posters for the Chemins de fer du Nord in 1927. Cassandre's son, Henri Mouron, has indicated to me in conversations that the earliest printings of this poster were notable for their black color, which had a depth and thickness reminiscent of silk-screen inking, making us believe that this copy was one of the first to be pulled off the presses. Mouron / Cassandre pl. 11, Weill / Cassandre pl. 11, Suntory 48, p. 72, Reina Sophia p. 161.
Set Alert for Similar Items 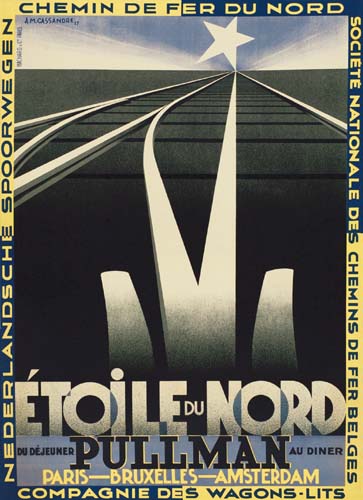