Provenance: Gift from artist; by descent to private collection.

The Painted Desert Room was the original 450-seat showroom that functioned as the main performance and entertainment venue at Wilbur Clark's Desert Inn (later the Desert Inn Hotel and Casino) in Las Vegas, which operated from 1950 to 2000. Though Charles Cobelle was chosen to complete the project and Berman's mural designs were ultimately unrealized, these stunning imaginary desert landscapes reflect Berman's typical fantastical surrealist aesthetic that pervaded his set designs for the opera, ballet, and theater, while also giving insight into his artistic process.

In contemplating the vibrant colors and stunning architectural quality of Berman's rock formations with their dramatic arches, it is surprising that Berman's theatrical vision was cast aside in favor of Cobelle, whose more abstract murals were rather lackluster in comparison. Perhaps the design committee believed that Berman's designs would distract or be in conflict with the elaborate stage shows, which boasted extravagant performances featuring showgirls, epic story lines, and an orchestra seated in a band car that was mechanically whisked on and off the stage. More likely, one can speculate that Berman was passed over due to his overstepping his bounds as a mural painter, which could have irked the committee. Berman's notes under the illustrations indicate that he had no qualms about suggesting changes to the setup of the venue in order to better accommodate his murals. For example, he stated: "The elevation of the settees above the level of the dark wall plastic dado is exceedingly bad for the whole scheme of the murals - it should be kept on the same level!!!" and "This sketch (like sketch I) was also done before receiving elevation plans with indication of corner settees! In this sketch it would occupy the right corner of the mural and I can not advise strongly enough against the breaking up of the bottom level of the murals, which will not fail to have a very damaging effect on the whole decoration."

When Steve Wynn purchased the property in 2000, the structure was demolished, and the Wynn and Encore are now where the Desert Inn once stood. Many view its closure and subsequent demolition as a marker of the end of old Las Vegas. Frank Sinatra had made his Vegas debut in the Painted Desert Room in 1951 and became a regular performer. He once said: "Wilbur Clark gave me my first job in Las Vegas…For six bucks you got a filet mignon dinner and me."
Set Alert for Similar Items 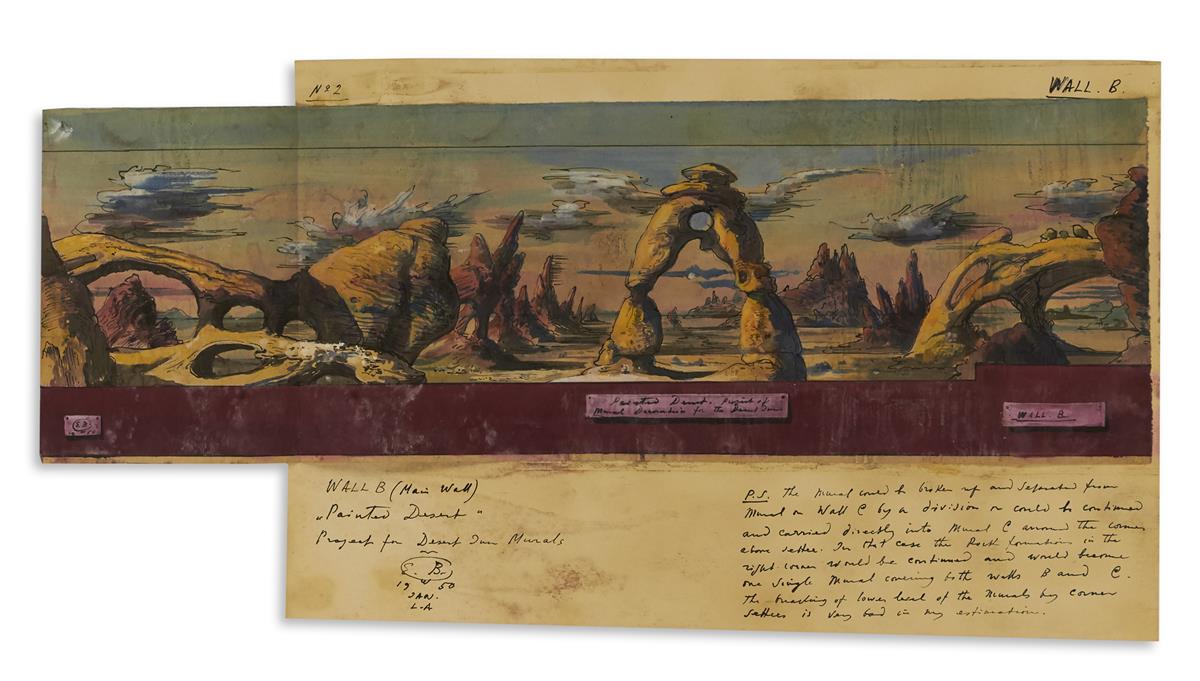