Color aquatint and etching on Arches cream wove paper, 1977-78. 475x264 mm; 18 3/4x10 1/2 inches, full margins. A trial/working proof with variant colors, aside from the edition of 146. Signed and inscribed "essai" in pencil, lower margin. Printed and published by Georges Visat, Paris. A superb impression of this very scarce, early print with strong colors.

Based on a same-titled painting, 1976, in the Museo de Arte Contemporaneo de Caracas.

Bacon (1909-1992) was born in Dublin to parents of English descent. His father was a war veteran and a racehorse trainer and a direct descendant of the elder half brother of Sir Francis Bacon (1561-1626), the famed English philosopher. His mother was a wealthy heiress to a steel business. Bacon and his four siblings were mostly raised by a nanny (Bacon would come to regard her as a mother figure, and she later moved to London to live with him). Bacon's father kicked him out of the family house after he was found wearing his mother's clothing, confirming his homosexuality, after which he moved to London in 1926. A small weekly stipend from his mother's trust fund, combined with several temporary jobs, supplied him with enough income to live. He traveled around Berlin and Paris the following year, frequenting the cities' gay nightclubs and visiting art exhibitions and museums. He was particularly taken by a Picasso exhibition at Galerie Paul Rosenberg, Paris, which inspired him to start drawing and painting. Back in London, Bacon started a career as a furniture and interior designer; his designs were first exhibited in 1929. Bacon continued to paint during this time (still greatly influenced by Picasso) and the first public exhibition of his artwork was not well received. He burned many of his early exhibited works following the largely negative response.

Bacon was exempt from participating in the war on account of his asthma problems. He spent time in Hampshire before returning to London in 1941, and he soon began fostering relationships with fellow London artists Lucian Freud and Graham Sutherland. During these years, Bacon's career flourished as he developed and refined his highly idiosyncratic style and point of view. In 1944, he painted Three Studies for Figures at the Base of a Crucifixion and effectively threw himself to the forefront of the contemporary art world when it was exhibited in 1945 at the Lefevre Gallery, London. Alfred H. Barr, of The Museum of Modern Art, New York, purchased one of Bacon's paintings in 1948, solidifying his promise as an emerging artist. The Hanover Gallery, London, began representing the artist the following year and he remained with them until 1958, when Marlborough Fine Art, London, took over (they agreed to pay off the artist's gambling debts). Bacon led a somewhat troubled private life, plagued by alcoholic tendencies, an addiction to gambling and soured by the fact that his lifestyle was perceived as illicit (homosexuality was still illegal and largely taboo at the time). He had numerous tumultuous and abusive relationships throughout his life, often with older men.

Bacon's oeuvre consists almost entirely of portraiture and figural representations. He approached this genre uniquely, disparate from its historical roots of memorializing the rich and the royal. Bacon's portraits represent the fluid, disjointed and fleeting nature of existence--nothing like the grand and immortalized portraits of old. His figures are wrought with anxiety, physical pain and discomfort, and are often disfigured or with distorted features. They appear solitary and in unspecified and unadorned rooms and landscapes. His faces are often hidden or completely blurred, which gives them the appearance of being in motion. Bacon's works are profoundly existential and represent the fractured image of humanity in post-war Europe. The reverence for his work has continued to increase dramatically since his death in 1992; in 2013 Bacon's triptych Three Studies of Lucian Freud, 1969, broke the record for the most expensive artwork ever sold at auction. Sabatier 3.
Set Alert for Similar Items 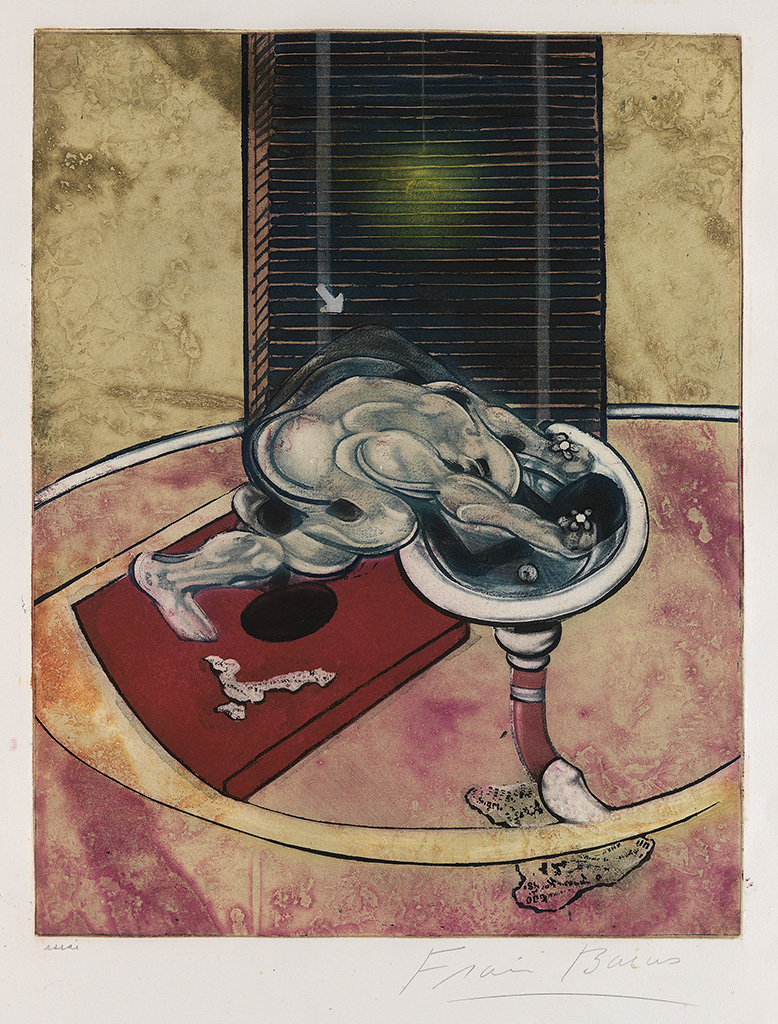