Engraving and stipple-engraving, circa 1505. 283x232 mm; 11 1/4x9 1/4 inches. Bull's head with a cross and the letters S M in a circle watermark (Briquet 15396, which dates from circa 1500-10 and is found on imprints from Innsbruck and Treviso at this time). Trimmed on or just inside the upper and lower plate mark on the sides and inside the plate mark in the spaces, with the subject preserved. A very good and early impression of this exceedingly scarce, Italian Renaissance engraving.

We have found only one other impression at auction in the past 30 years, a later impression with a watermark from the second half of the 16th century (sold Chistie's, London, March 31, 2010, lot 36).

Campagnola's importance as an early printmaker and Renaissance artist corresponds to his use of stipple-engraving technique, which produced shading obtained by dots made by the point of the graver on the metal plate. According to Landau and Parshall, "The innovation allowed a much greater range of tone from white to black, and at the same time a more controllable graduated transition between lighter and darker areas of the image. The disadvantages of the technique were that it was immensely more time-consuming than ordinary engraving, that the dots produced, unless of sufficient size, would wear down quite quickly, and, finally, that it was extremely difficult to freshen-up a tired-looking plate by re-engraving it--a common strategy in printmaking. Whereas pushing the burin along the existing, shallowed grooves was a well-tried and effective method of freshening worn plates, hitting again the myriad of of existing dots was an impossible task, and creating new dots would easily produce patches of ink where new and old dots joined together. This is precisely why there are no known instances of Giulio's plates being reworked in later states by retouching the dotted areas of the image," (Landau and Parshall, The Renaissance Print, New Haven/London, 1994, page 261).

It has been widely accepted that Campagnola adapted the figure of Saint John the Baptist from a now lost drawing by Andrea Mantegna (1431-1506, see lots 2-4) while the landscape was supplied contemporaneously by Giorgione (circa 1477/78-1510), who worked in partnership with Campagnola. There is a masterful ink drawing now in the Louvre, Paris, with the landscape rendered in reverse of the print, by Giorgione, that is believed to be the source for Campagnola's landscape in Saint John the Baptist. It appears that Giorgione intentionally left the space for the figure blank in his landscape drawing, as Campagnola already had his figure from a design by Mantegna engraved on the plate, and that sometime thereafter none other than Titian (1488-1576) altered Giogione's drawing, in his own representation of Saint John the Baptist on the sheet. Bartsch 3; Hind 12.
Set Alert for Similar Items 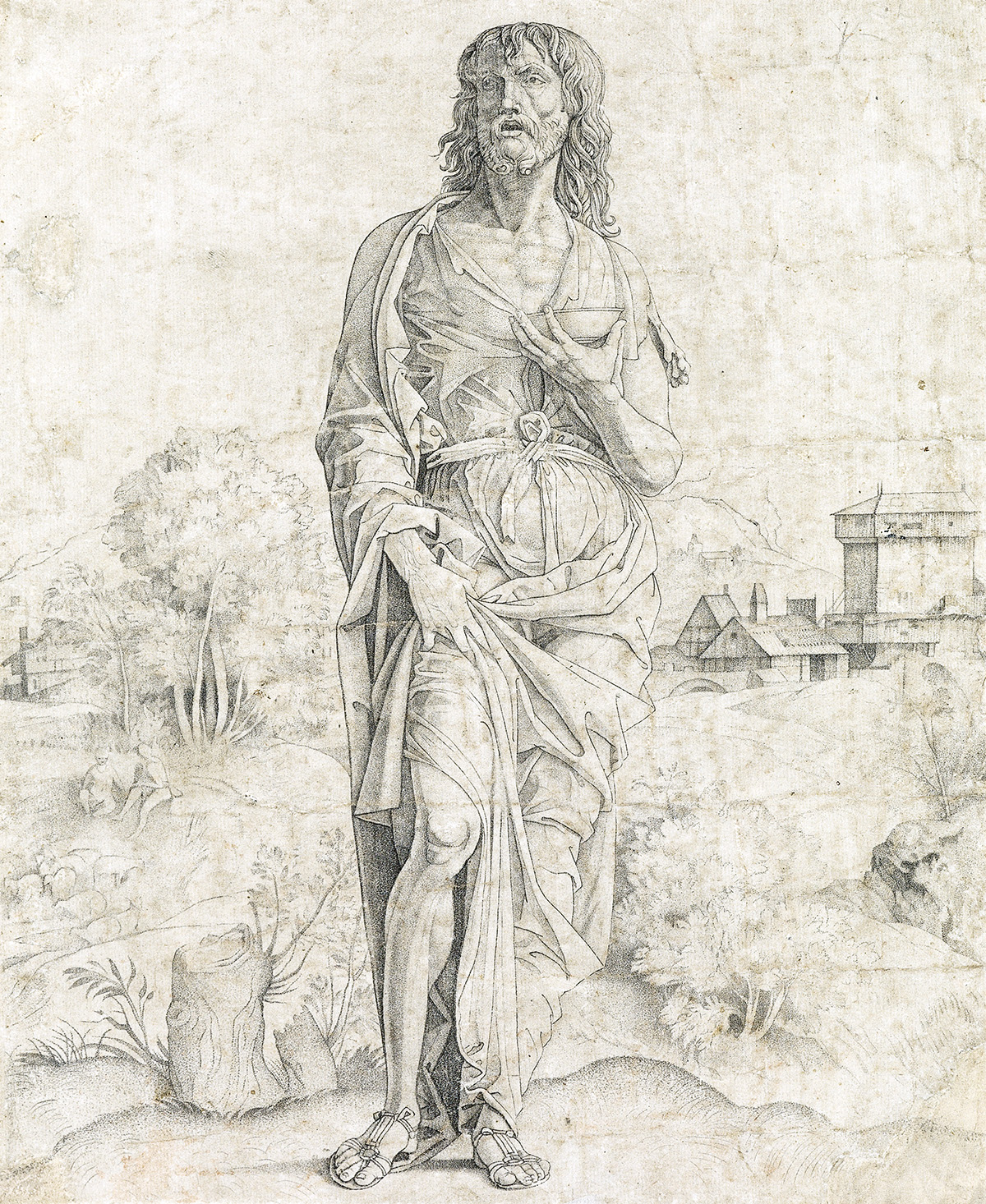