This is the first known painting by this important Harlem Renaissance artist, poet, educator, columnist and editor to come to auction--and the only painting by Gwendolyn Bennett that we have located. Born in Texas and raised in Brooklyn, Bennett began her college art studies at Columbia University, but transferred to and graduated from Pratt Institute in 1924. This silvery, Corot-like landscape shows the influence of her later studies in Paris from 1925-26 when she attended the Académies de la Grande Chaumière, Julian, and Colarossi, and the École du Panthéon, Paris.

During the Harlem Renaissance, Bennett received more acclaim as a talented and prolific poet and short story writer. In addition, she edited the literary journal Fire!! and wrote an arts column, "The Ebony Flute," in Opportunity. In 1923, she both illustrated a cover for Crisis, and her poem "Heritage" was published by Opportunity. Between 1923-1931, 22 of her poems were published in the journals Crisis, Opportunity, Palms and Gypsy.

Bennett married Dr. Albert Joseph Jackson in 1927 and lived in Eustis, FL at the time of the painting, after moving from Washington, DC--the stretcher bars bear the partial label of a Washington, DC art supply store. Bennett returned to New York in the mid-1930s, and continued an influential career in arts administration, becoming director of the Harlem Arts Guild, the Harlem Community Art Center (after Augusta Savage) and the progessive George Washington Carver School.
Set Alert for Similar Items 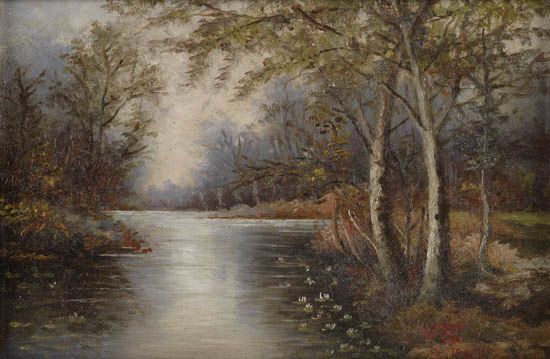