Price Realized: $ 15,000
Price Realized: $ 18,750
?Final Price Realized includes Buyer’s Premium added to Hammer Price
Estimate: $ 20,000 - $ 30,000
DECISION TO "PUBLISH THIS OLD MAN AND THE SEA . . . WAS LIKE A MILITARY SECRET" HEMINGWAY, ERNEST. Autograph Letter Signed, "Love / Mr. Papa," to "Dearest Marlene," affirming that he had not forgotten her, wishing that things were as simple as they are in war, expressing his love for her, explaining why he could not send the manuscript of The Old Man and the Sea, stating that she knows better than anyone that he is a better poet than novelist, promising to send a special copy of the book, inviting her to visit, expressing admiration for her, discussing his health, suggesting that the two of them celebrate their articles in Life magazine, and, in a postscript, tempting her to visit by describing the cool nights in July and August. 4 pages, 4to, personal stationery, onionskin paper, written on rectos only of separate sheets; horizontal folds. Finca Vigia, 12 August 1952
Set Alert for Similar Items

"Your cable came Sunday afternoon and the phone was so bad I couldn't hear it. All I could make out was . . . that I had not sent you a book and I had forgotten you. Balls. So then I tried to find you in NY. And when the call came through had to shout into the phone and could not hear your lovely voice and we said goodbye like people who did not understand each other nor love each other. . . .
". . . Please know I love you always and I forget you sometimes as I forget my heart beats. But it beats always.
"Lots of times I have what seem like very bad troubles, at least they seem bad because people die, or I am bitched out of money unbelievably or people I love get cancer; or I start to not give a damn about anything and wish things were simple like in a war where you can just do your duty and maybe be killed . . . .
"When I decided to publish this Old Man and the Sea it was all like a military secret because of lining up the book of month, Life, Scribners and everything was on that basis. Naturally everyone gives away the secret but me. You know I would not tell you a military secret if I were in bed, or drunk or anything. So I did not send you the Mss. once it was in that secretive basis. But I know people who were sworn not to show it to other people did. One son of a bitch wrote me, very gloatingly, that I would be annoyed to know it but that he had already read it. . . .
". . . I would rather have you read it than anyone.
"Nobody knows I am a good poet except you and Mary. Probably I am a better poet than anything. But you are the one who knows it best . . . .
"If you have any bad problem or if you are bad lonely would you like to come down here? Or would you like to come down here just for fun?
"I always love you and admire you and I have all sorts of mixed up feelings about you like that we are partners in a Course de Six Jours in the Vel d'Hiv or the old Sportz Palace (mis-spelled) both are always reliable, always faithful to the other, and capable of doing the impossible and the incredible when we have to. We both have the endurance and the fortitude and we never lost the pointe de vitesse. The main difference is that you are beautiful and I am ugly.
"It was a great mistake we never made the night club. Sometime we ought to think out how it would have been. It would make a fine picture and they could get an actor to be me.
"I don't know any cheerful gossip. Things are not too good here. But we've seen that before. Countries I mean. Nothing bad yet. . . .
"Hope you will like the book. I think it is nice that we come out in two successive, or almost, issues of Life. That's almost what we did in the other kind of life. Though being much older I came out first in Der Querschnitt. . . .
"Maybe you should come down to make a thing about us both getting Life. (Fifteen years off for good behaviour). I think it is a good idea. . . ."
Postscript: ". . . The pool is cool to cold, and the ocean is lovely. I will introduce you to the Old Man. Town is fun at night, all displaced gamblers."
Hemingway's novella Old Man and the Sea was first published in the September 1, 1952, issue of Life magazine. Appearing in the August 18, 1952, issue of that magazine was Winthrop Sargeant's article, 'Dietrich and Her Magic Myth"; the article includes an image of Marlene Dietrich in her New York apartment, where a table displays a large photograph of Hemingway inscribed "With love, Papa."
Property of the family of Marlene Dietrich. 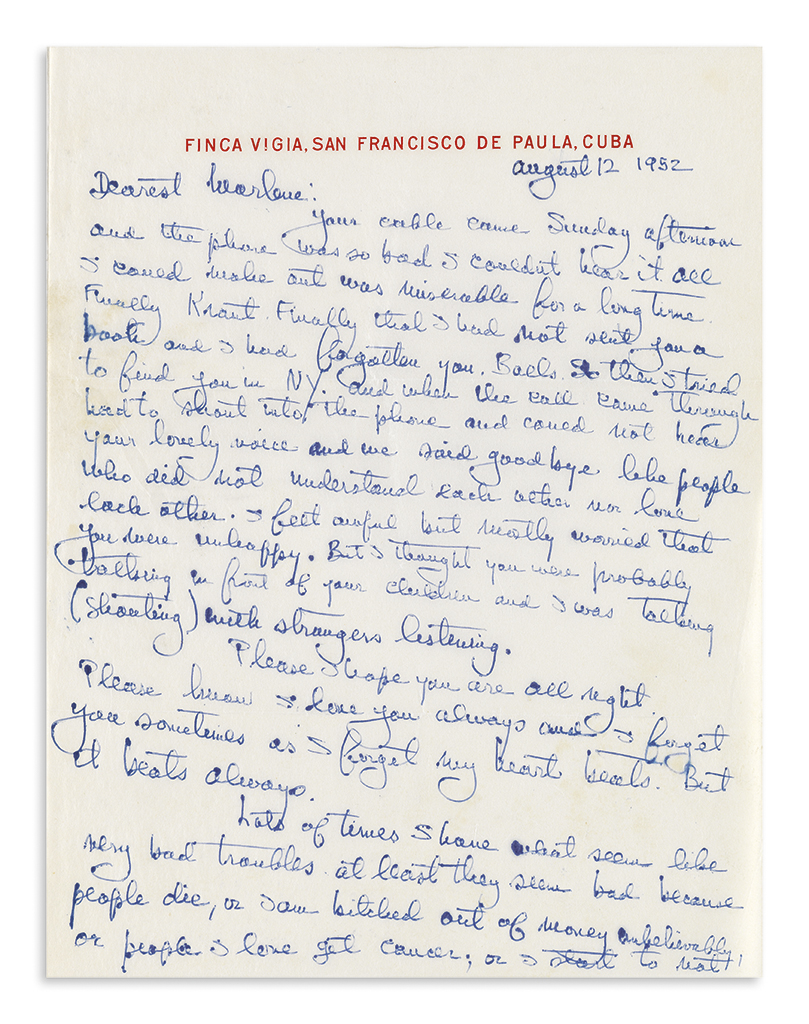