Price Realized: $ 20,000
Price Realized: $ 25,000
?Final Price Realized includes Buyer’s Premium added to Hammer Price
Estimate: $ 30,000 - $ 40,000
HENRI DE TOULOUSE-LAUTREC (1864-1901) [BABYLONE D'ALLEMAGNE.] 1894.
47 1/2x33 1/2 inches, 120 3/4x85 cm. Chaix, Paris.
Condition B+: restoration along repaired tears and creases in margins and image; minor losses and restored losses in margins. Framed. Unexamined out of frame.
The design and printing of the poster for Babylone d'Allemagne was partly an inside joke and partly an international scandal. The poster advertises a book written by Lautrec's friend Victor Joze. The two had worked together before, in 1892, when Lautrec designed a poster for la Reine de Joie, another book by Joze that resulted in a huge scandal. Two years later Joze again approached Lautrec to help promote his latest work, The German Babylon, exposing the decadence of the Berlin aristocracy. The poster, one of Lautrec's most elaborate designs, is composed of two opposing diagonals. The first is the line formed by the ascending cavalry parade, with a handsome young officer astride his mount. The second diagonal is formed between the hirsute sentinel and a passing bourgeois couple, the woman casting her glance at the blond rider. The white haunches of the horse (the uninked paper itself) are outlined in Lautrec's favored olive green, attracting the viewer's eye. He also uses the green in crachis (splatter), in the background. When Joze saw the finished poster, with the prominently displayed horse's rump and the unattractive German guard (allegedly a caricature of the Kaiser), he felt that it was too dangerous to post all over town, and that there might be a political backlash against it. Lautrec had obviously anticipated his friend's concern, and to thwart any plans to squelch the image, had paid for the printing and distribution of the poster himself. This is the rare version before text. Adriani p. 96, Delteil 351 II, DFP-II 832 (var), Art Nouveau p. 97 (var), Affichomanie 108 (var).
Set Alert for Similar Items 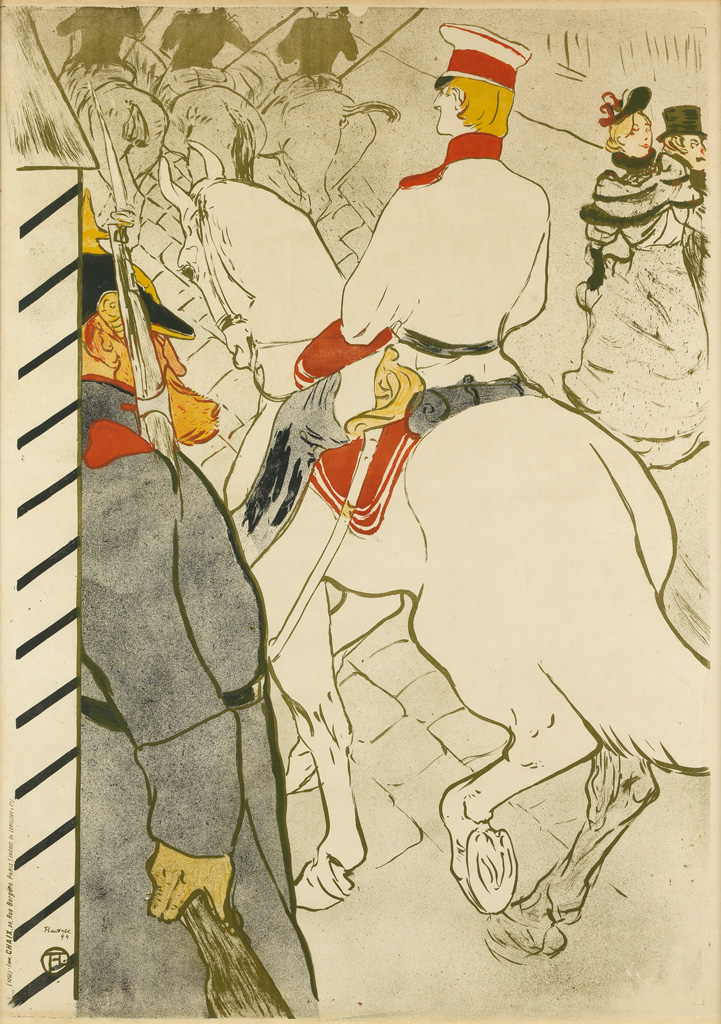