This painting has a remarkable provenance having been passed down through the descendants of Edward Lawrence Scull (1846 – 1884). Scull bought at least three paintings from Tanner in 1883 then he died, tragically, at age 38 the next year. On the back of another Tanner painting in the family, his wife Sarah Elizabeth Marshall Scull (1845 – 1910) wrote the following note to her children: "The first picture that dear Edward bought of the colored Artist Tanner in 1883. Tanner was then butler for Dr. Albert Smith but had begun to draw and paint and used to go to Papa's office to talk with him about art. Now in 1900 he is living in Paris his paintings are in many of the finest private modern collections of the world." Dr. Albert H. Smith was a famous Philadelphia clinician, an Orthodox Quaker and the Scull family doctor; he was known as a medical reformer who helped found the Woman's Medical College of Pennsylvania. He introduced Tanner to Scull; four generations in Philadelphia have since owned the painting.

This beautiful pastoral painting is one of the finest and earliest Tanner paintings to come to auction in the past twenty five years. In this landscape Tanner displays the polish and the skill of a great talent. He painted Boy and Sheep under a Tree early in his studies at the Pennsylvania Academy of Fine Art when he seized on the speciality of painting animals.

Henry Ossawa Tanner was born in Pittsburgh to a well-educated and devoutly religious family. His father Benjamin Tucker Tanner was an eminent bishop, author and leader in the African Methodist Episcopal Church. He and his wife, Sarah Elizabeth Miller, an ex-slave from Winchester, Virginia, were both graduates of Avery College, just outside Pittsburgh. Bishop Tanner was an abolitionist, a friend and collaborator with Frederick Douglass and a supporter of the Underground Railroad. With the support of his parents and inspiration from the 1876 Philadelphia Exposition, Henry Ossawa Tanner enrolled in the Pennsylvania Academy of the Fine Arts in December of 1879.

A year later he began life drawing classes under the tutelage of Thomas Eakins. After an interest in maritime painting, Tanner settled on painting animal subjects, with his stated desire "to become an American Landseer." According to Anna O. Marley, "Tanner was so devoted to animal painting that he bought a sheep to serve as a model for his pastoral compositions." In addition to the animals, Tanner's attention to realism in this painting is evident in the careful rendering of small detail and naturalistic light. The Christian imagery of a young shepherd with his flock is also a reflection of the environment of his family, patrons and supporters. Marley p. 19.
Set Alert for Similar Items 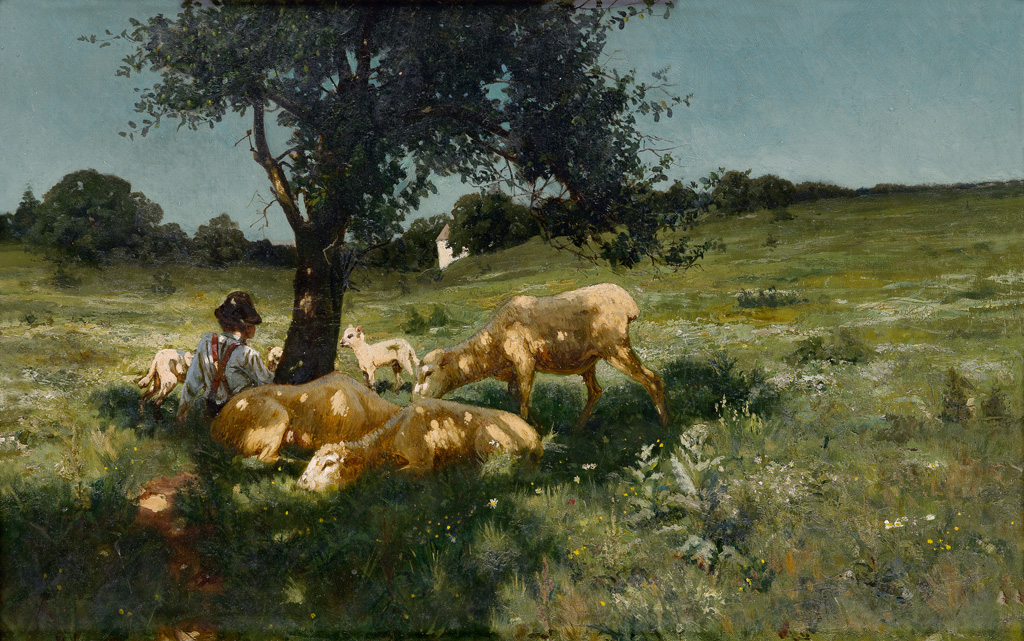