This grand but poignant Hughie Lee-Smith oil is a significant painting in the artist's oeuvre, a mid-career reinterpretation of one of the artist's best known subjects--the solitary flute player against a desolate landscape. In Boy with Flute, the artist reprises an important theme that he began as early as 1944 with the iconic Slum Song (sold at Swann Galleries in the October 4, 2007 sale of the Golden State Mutual Life Insurance Company African-American Art Collection). Dr. Leslie King-Hammond identified Slum Song as one of his earliest important paintings, as it defined a romantic and philosophical side to the artist's early social realist painting. One of Lee-Smith's best known works, The Piper, 1953, in the Detroit Institute of Arts, revisited this subject with a larger, more sensitive figure. It won him the Founder's Prize and helped launch his careeer. With Boy with Flute, Lee-Smith adapts his subject to the more existential and universal concerns of the 1960s--the young man is no longer African American, and he is placed into a more ominous, less intimate scene. Here, Lee-Smith's boy now faces a beautiful but forbidding landscape, as evidence of the city is largely reduced to scattered masonry and crumbling structures, with thunderclouds on the horizon. It is a stirring, cinematic scene that demonstrates the enduring intelligence behind Hughie Lee-Smith's painting throughout his long career.
Set Alert for Similar Items 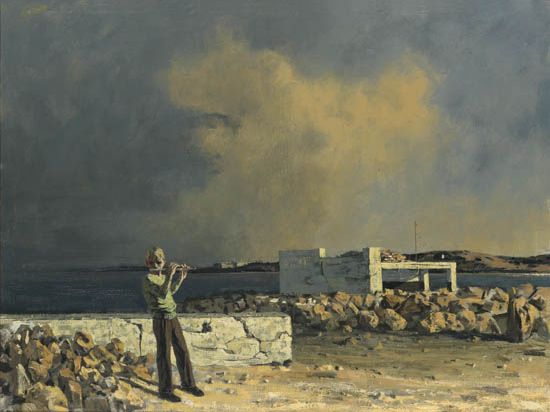