Price Realized: $ 5,600
Price Realized: $ 7,000
?Final Price Realized includes Buyer’s Premium added to Hammer Price
Estimate: $ 10,000 - $ 15,000
LETTER LEADING TO DUEL IN WHICH JACKSON KILLS DICKINSON JACKSON, ANDREW. Autograph Letter Signed, to editor Thomas Eastin ("Mr. Eastin"), retained draft, submitting a letter to be published in a Nashville newspaper, responding to a letter published in the same paper, both of which concerning a dispute about what was said to whom on the occasion of the settlement of a gambling debt, including a justification for his having "caned" the young, but adult, Thomas Swann. 5 1/4 pages, folio, written on the recto and verso of a leaf and on a separate folded sheet; tissue repairs at several folds, toning and scattered chipping at edges with minor loss to text. [Nashville], 6 February 1806
Set Alert for Similar Items

". . . The fact to be decided by the public, is, whether Mr. Swan[n], in his solicitude to 'know the true statement', though unconcerned, has omitted, in his assertion to Mr. Dickinson and the public, some material fact, or, in other words, whether I asserted that which was untrue? . . .
"This young man has either a vicious habit of deviating from the truth, or a natural weakness of memory, either of which is equally pernicious to society . . . . It is difficult to find an appropriate epithet for a character who descends to state falsehoods, where the honor of a man is at stake; . . ."
Jackson published a revised version of the present letter, dated February 10, in the Impartial Review and Cumberland Repository. The published letter includes a statement, lacking in the present draft, that shows Jackson's animosity toward Charles Dickinson (1780-1806): "[Mr. Swann] has acted the puppet and lying valet for a worthless, drunken, blackguard scoundrel, who is now at war with, and flatly contradicts, and gives Mr. Swann the lie." Although Swann was the ostensible subject of the letter, Jackson's target was Dickinson. In May of 1806, Dickinson responded by publishing in the same newspaper a statement insulting Jackson. Upon seeing the statement, Jackson issued a formal challenge, and, on May 30, the two men met in Kentucky, accompanied by their seconds. Dickinson fired first, wounding Jackson. The answering shot struck Dickinson in the side, and he died later that day.
The present letter is one of two known complete drafts. Moser and MacPherson, The Papers of Andrew Jackson, vol. II. 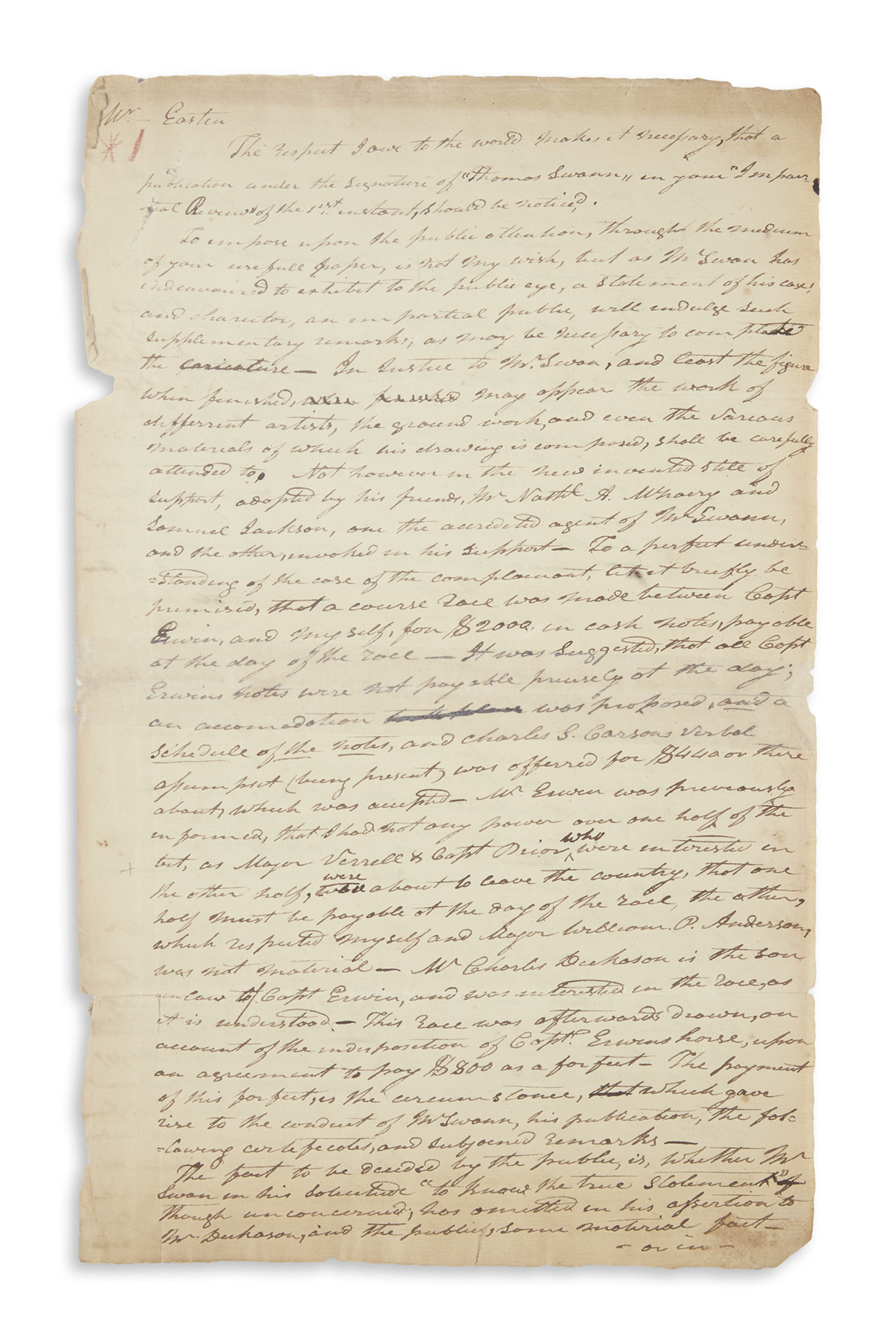