Price Realized: $ 6,000
Price Realized: $ 7,500
?Final Price Realized includes Buyer’s Premium added to Hammer Price
Estimate: $ 10,000 - $ 15,000
"PEOPLE IN 1840 WERE DELUDED BY THE HUMBUGGERY OF . . . LOG CABINS" JACKSON, ANDREW. Autograph Letter Signed, twice (in full and "A.J."), to editor of the Nashville Union J. George Harris, expressing joy at the result of the [1842 congressional] election, criticizing the propagandizing during the 1840 presidential campaign, denying the claims of Democratic newspapers that Jackson and Calhoun have reconciled, remarking however that he would support Calhoun if he were selected as a candidate by the Democratic Party, and, in a postscript, after noting that he is "scarcely able to write," adding on the terminal page: "N.B.: My letter to Mr. Dawson is a concise view of my real opinion of the constitutional powers of the states & Congress--he solicited the privilege to publish it, as he believed much good would result there from. Of course I could not withhold my assent." 3 1/4 pages, 4to, written on a folded sheet; moderate toning and brittling overall (but no chipping), separations at folds and loss to outer edges expertly repaired, center vertical fold reinforced with paper, faint bleedthrough overall, minor scattered smudging. "Hermitage" [Nashville], 14 December 1842
Set Alert for Similar Items

"I . . . sincerely rejoice with you and the whole democracy of this union, on the great triumph achieved in Massachusetts, as well as over the other states, in which elections have lately taken place. I have never despaired of our republican system--have allways [sic] relied on the virtue of the sovereign people to defend & protect the Constitution & glorious Union. It is true the people in 1840 were deluded by the humbuggery of coons & coonskins, hard cider, big balls, & log cabins, but I always believed that as soon as this canvass was over, and the people began to seriously reflect, their eyes would be opened from delusion under which they acted, & the recoil would be such, as we see realized all over this union--and I now predict, that such humbuggery will never he[re]after deluge the American people--[the] republican system will long endure.
"I note 'that you will see it stated in all the papers of a dem. character with which you exchange, with perhaps few exceptions, that a final reconciliation & restoration of mutual confidence and faith has taken place between Mr. Calhoun & myself.' There is not one word of truth in the statement. I have had no communication with Mr. Calhoun since I left the Executive chair. & I make [no] concessions to Mr. Calhoun--I never have and I assure you never will--I have nothing to concede. This brings me in mind of Mr. [John] Bell & Co, in the case of Judge [Hugh Lawson] White and the publication must have emanated from some busybody with the same views. When Mr. Calhouns name has been introduced as a candidate for the presidency, I have uniformly replied that a national convention fresh from the people must decide upon the candidate; and whether that be Mr VanBuren, Mr Calhoun, or Mr Buchannan which may be selected, the whole Democratic Party must unite upon him. . . . [T]he object of the Whiggs [sic] will be to endeavour to divide the republi[can] ranks, by getting more than one candidate into the field, like Bell with Judge White, to divide and conquer. . . . Should Mr. Calhoun be selected by the Democratic Peoples Convention . . . , I as one of the Democrats would . . . support [the] candidate thus represented . . . ."
During the 1840 presidential campaign, the populist rhetoric of the Whig Party declared their candidate William H. Harrison to be "the log cabin and hard cider candidate," associating him with the rugged and simple life of the people. Although he had a privileged background and his Democratic opponent--Martin Van Buren--a modest one, Harrison won both the electoral and the popular vote. While the election gave the Whigs control of the presidency and Congress, the Democrats regained the majority in the House of Representatives after the 1842 midterm election.
John C. Calhoun served as Vice-President in Jackson's administration, but a lasting rift divided the two men after the Petticoat Affair (1829-31) and especially the Nullification Crisis (1832-33), in which Calhoun defended a right of states to nullify federal laws they deemed unconstitutional, including the federal tariffs that were injurious to Calhoun's home state of South Carolina. By 1839, both Calhoun and Jackson were members of the Democratic Party, which considered Calhoun as a possible candidate for president in advance of the 1844 election (nominating instead James K. Polk).
In a letter to editor of the Cincinnati Advertiser Moses Dawson on December 16, 1841, Jackson outlines his views concerning the constitutional limits of Congress to produce currency: "The sages who made our constitution, intended to guard us forever against a paper mon[e]y currency . . . . [N]either the general government nor the states, have any constitutional power, to make a paper currency, neither thro corporations or by bills of credit . . . ." (Moses Dawson Correspondence at Xavier University Library). 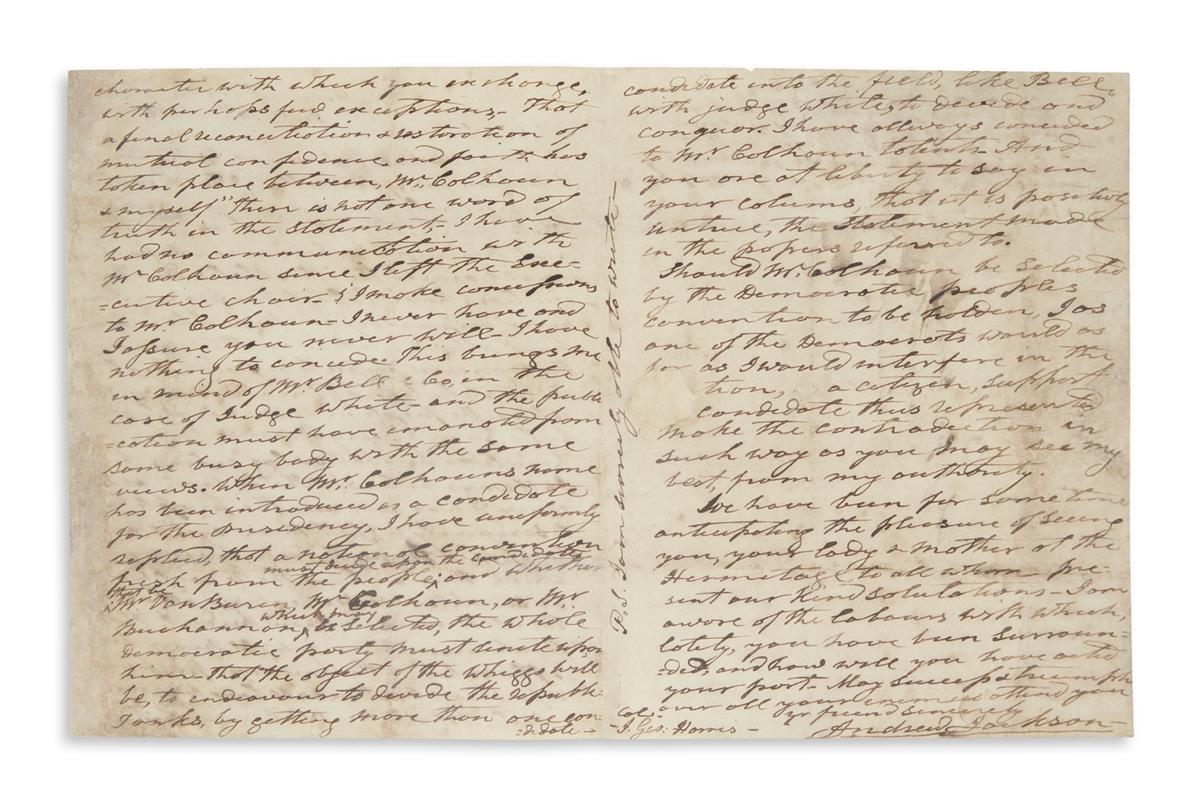