Superb, crisp and fresh impressions with the most vibrant colors. With the original linen-covered slip case, all in very good, clean condition.

Based on Lawrence's 1941 series of 22 gouache and tempera paintings The Life of John Brown, this set of prints was commissioned by the Detroit Institute of Arts. Jacob Lawrence used his first of three successive Julius Rosenwald Fund fellowships to complete the series of paintings - the same year he married Gwendolyn Knight. The 23-year old artist had already received extraordinary attention for his earlier historical painting series Frederick Douglass, The Life of Toussaint L'Ouverture, Harriet Tubman and The Migration Series. These original works from The Life of John Brown were too fragile for traveling exhibitions by the time of the Whitney retrospective in 1974. Due to extensive paint loss, the Institute had to decline the request for their loan to this exhibition. Ives-Sillmann re-created the series with the artist in order to bring the works to a broader public. The portfolio is a tour-de-force of screenprinting: each print was made through hand-cut film stencils and displays the precision that had previously attracted artists such as Josef Albers and Ad Reinhardt to Ives-Sillman. Romare Bearden and Harry B. Henderson, Jr., A History of African-American Artists, p. 300. Nesbett L77-5. 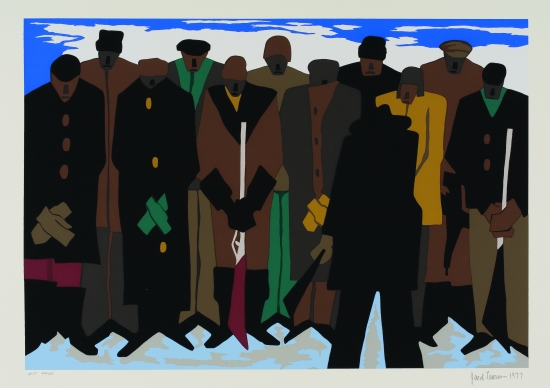