This recently discovered work dates from the time Jacob Lawrence spent in New Orleans--from the fall of 1941 through the spring of 1942. After finishing his 60 panel series, The Migration of the Negro, the artist was awarded a $1,200 renewal of his 1940 Rosenwald scholarship to paint The Life of John Brown. Lawrence married Gwendolyn Knight on July 24, 1941, and they left New York for New Orleans that fall. While working on the John Brown series, Lawrence painted individual scenes of his new Southern environs. By 1941, the young artist had added brighter colors and a more angular modernity to his flattened and simplified compositions of the late 1930s. This card-playing couple is closely related to the craps players of his The Green Table, also gouache on composition board, 1941. It also has similarities with Untitled (Two People in a Bar), 1941, another couple with angular faces smoking cigarettes.

We would like to thank Peter T. Nesbett, former director of the Jacob Lawrence Catalogue Raisonné Project, and co-author of Jacob Lawrence: Paintings, Drawings and Murals (1835-1999), a Catalogue Raisonné, for examining this painting. It will be sold accompanied by his signed letter of opinion, dated November 24, 2009, confirming the attribution. 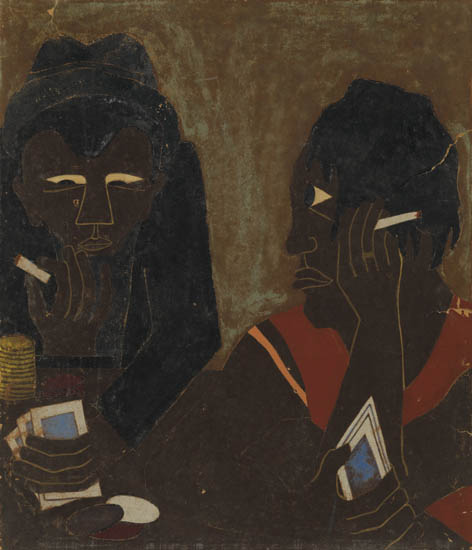