Engraving, 1562. 450x301 mm; 17 3/4x12 inches, small margins. Cardinal's hat (?) in a circle watermark. Published by Antonio Salamanca and Antonio Lafreri, Rome. From Speculum Romanae Magnificentiae. A superb, evenly-printed and dark impression of this very scarce engraving, with strong contrasts and little to no sign of wear.

According to the Metropolitan Museum of Art, New York, which has in the collection another impression of this engraving, "This print comes from the museum's copy of the Speculum Romanae Magnificentiae (The Mirror of Roman Magnificence). The Speculum found its origin in the publishing endeavors of Antonio Salamanca and Antonio Lafreri. During their Roman publishing careers, the two foreign publishers--who worked together between 1553 and 1563--initiated the production of prints recording art works, architecture and city views related to Antique and Modern Rome. The prints could be bought individually by tourists and collectors, but were also purchased in larger groups which were often bound together in an album. In 1573, Lafreri commissioned a title page for this purpose, which is where the title Speculum Romanae Magnificentiae first appears. Lafreri envisioned an ideal arrangement of the prints in seven different categories, but during his lifetime, never appears to have offered one standard, bound set of prints. Instead, clients composed their own selection from the corpus to be bound, or collected a group of prints over time. When Lafreri died, two-third of the existing copper plates went to the Duchetti family (Claudio and Stefano), while another third was distributed among several publishers. The Duchetti appear to have standardized production, offering a more or less uniform version of the Speculum to their clients. The popularity of the prints also inspired other publishers in Rome to make copies however, and to add new prints to the corpus.

Bos' (circa 1520-circa 1580) engraving depicts the famous Ancient Roman marble sculpture of the hero Hercules, originally made for the Baths of Caracalla in Rome. This massive sculpture got its current name after its rediscovery in 1546, when it entered the collection of Cardinal Alessandro Farnese, grandson of Pope Paul III. Hollstein 15
Set Alert for Similar Items 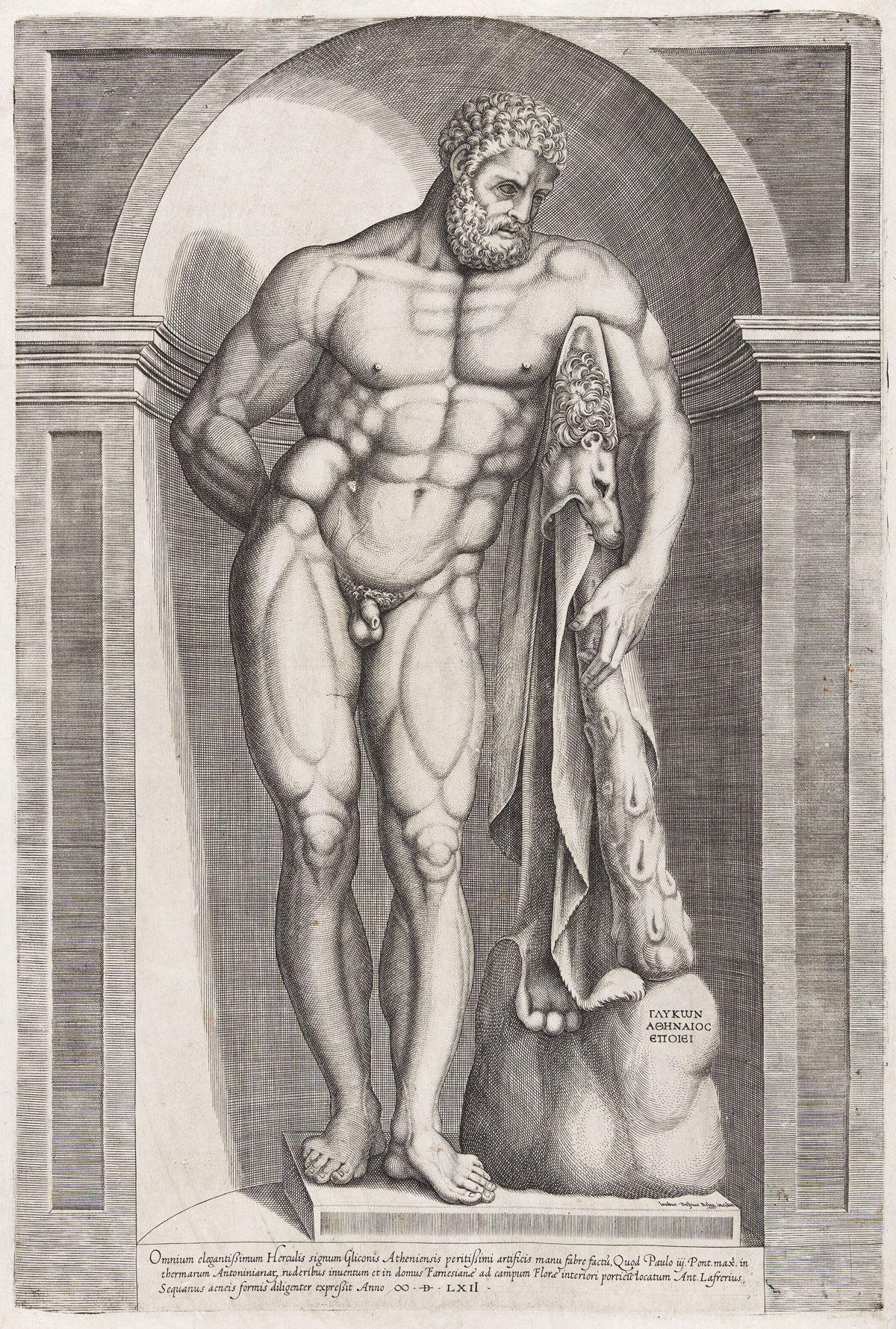