Etching and drypoint on antique cream laid paper, 1889. 271x170 mm; 10 5/8x6 5/8 inches. MacDonald's third state (of 4), before the further darkening of the shadows of the clothes hanging upper center and their extension between the windows. Edition of approximately only 27. Signed with the butterfly and inscribed "imp" in pencil on the tab, lower left. From the unpublished Amsterdam Set. A brilliant, richly-inked, luminous impression of this extremely scarce etching.

We have found only 5 other impressions at auction in the past 30 years.

Whistler (1834-1903) was born in Lowell, Massachusetts in 1834 and spent his childhood in New England until his father Major George Washington Whistler, a prominent civil engineer, moved the family to St. Petersburg, Russia at the request of Czar Nicholas I to engineer the railway to Moscow. He showed promise as a young artist and attended drawing lessons at the Imperial Academy of Fine Arts, St. Petersburg. Following the death of Major Whistler, the family moved back to the United States. Whistler enrolled in the United States Military Academy in West Point in 1851, where he studied drawing under Robert W. Weir. After Whistler was discharged from the academy in 1854 for poor grades and an anti-military attitude, he struggled to keep employment.

In 1855, Whistler arrived in Paris with the resolve to become a professional artist. Though near destitute and struggling with his health, Whistler managed to enroll at the Ecole Imperiale et Spéciale de Dessin and to find work in the studio of Charles Gleyre. Whistler's time spent in Paris was marked by hardship but also by the energy of the burgeoning avant-garde artistic circles. His fortunes changed in late 1858 with the publication and success of Douze Eaux-fortes d'apres Nature, also known as the 'French Set,' printed by his brother-in-law Francis Seymour Haden and master-printer Auguste Delâtre. After the Paris Salon of 1859 rejected Whistler's oil painting At the Piano, the artist moved to London, and became influenced by the Pre-Raphaelites. During these early years Whistler's work drew from his family, friends and lovers for subject matter. His early etchings depicted these personalities with a softness and familiarity that was unique during the 19th century etching revival.

Whistler's success grew in subsequent years, exhibiting at the Royal Academy in London and most notably at the Salon des Refusés in 1863. It was perhaps a result of this success combined with Whistler's bohemian lifestyle that he and Haden started to grow apart. Despite their estrangement, this partnership helped pave the way for Whistler's success as a printmaker for the rest of his career. During this time, Whistler was relatively unproductive as a printmaker owing to his growing fame and numerous tumultuous personal issues including the scandalous John Ruskin libel trial of 1877-78. Though Whistler won the suit, he was forced to declare bankruptcy and turned again to etching. He created a handful of new Thames views that recalled his 'Thames Set' from 20 years earlier.

In the 1880s Whistler traveled extensively throughout Europe, drawing on etching plates directly from life in Venice, Amsterdam and Brussels. This process resulted in sketch-like etchings that show an intimate familiarity of ordinary life in these cities. After his two acclaimed 'Venice Sets,' of etchings Whistler's name became synonymous with the medium. During this late stage of his career, Whistler promoted 'art for art's sake' in his famous 'Ten O'Clock Lecture' presented in 1885. 'Nature is rarely right,' he toutted, 'and must be improved upon by the artist with his own vision.' In 1886 he was elected president of the Society of British Artists, though his tenure only lasted two years after being forced out by the conservative members. Appropriately, nearing the end of his career, Whistler published The Gentle Art of Making Enemies, his chronicle of grievances against his critics (namely Ruskin) in 1890. Kennedy 405; Glasgow 446.
Set Alert for Similar Items 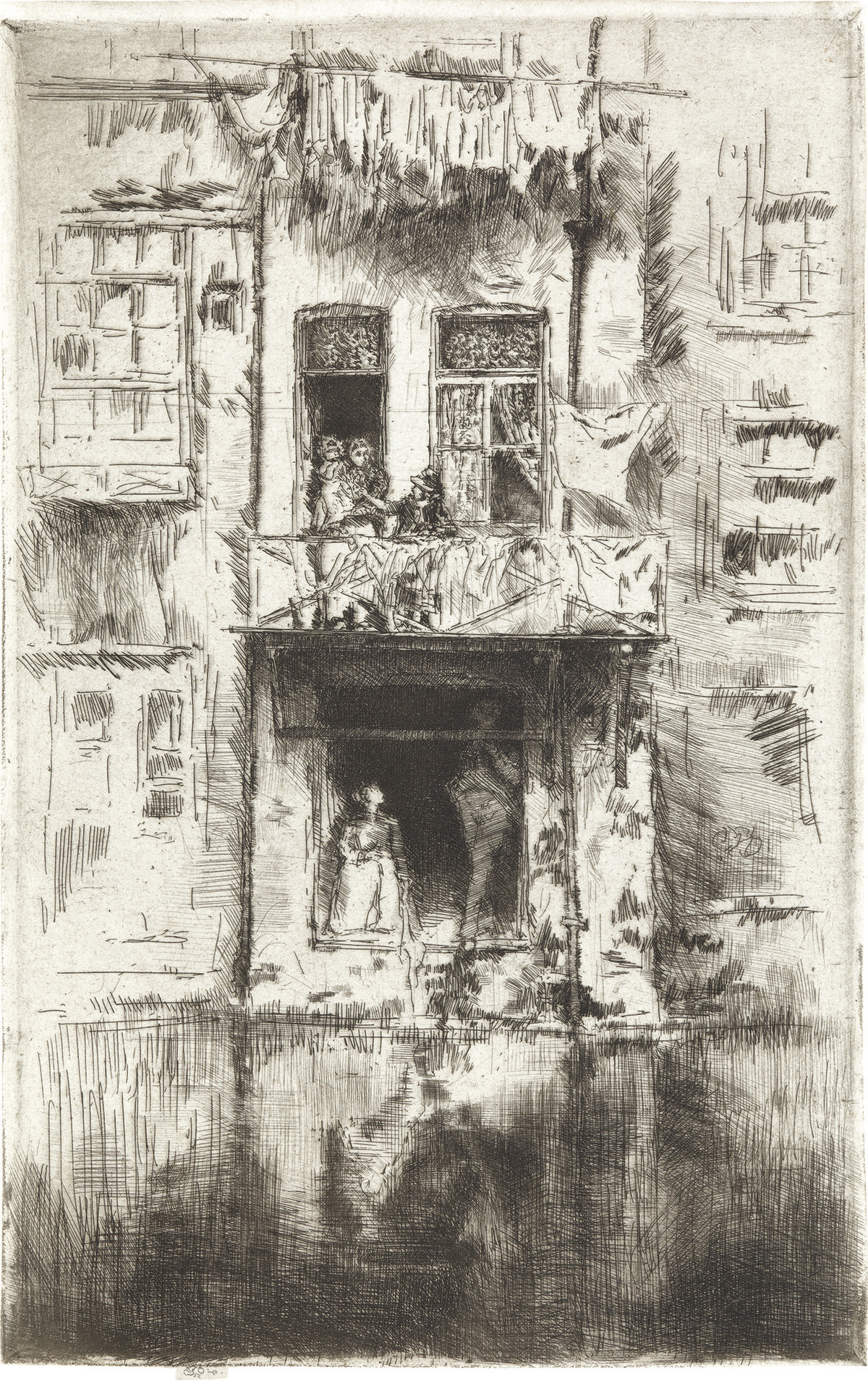