This masterful mid-century painting by James C. McMillan is the artist's first painting to come to auction. Mother and Child is a significant work in the distinguished career of this figurative painter and sculptor, whose career and body of work is just beginning to receive national recognition.

Born in Sanford, North Carolina, James C. McMillan was encouraged by his college-educated parents to pursue his interest in art. Talented and driven from a young age, McMillan graduated valedictorian from his high school class at the age of 15, and won a scholarship to Howard University in 1941. There McMillan studied under Alain Locke, Loïs Mailou Jones and James Lesesne Wells. Jones became his mentor, arranging for an illustration assistant position with the painter Ralston Crawford, and recommending him for Skowhegan. After Naval service during World War II, McMillan graduated in 1947 and earned a summer fellowship at the inaugural year of the Skowhegan School of Art in Maine, becoming its first African-American fellow. After three years teaching at Bennett College for Women in Greensboro as the chair of their new art department, McMillan struck out for Paris, following in the footsteps of Jones, and attended the Académie Julian in 1950 on sabattical. McMillan returned to Bennett College in 1951, and then, while on another sabattical, earned his MFA in sculpture from Catholic University in Washington, DC.

Mother and Child shows how McMillan's adapted mid-century approaches to painting with social realism. This work was painted during his MFA period, or shortly thereafter, and shows his interest in both the social-realism of the period with a sophisticated color sense and balance. McMillan admired Hughie Lee-Smith and was influenced by the work of other African-American artists of the 1940s, including Charles Alston, Charles White and John Wilson. Mother and Child recalls his experiences of the segregated South, and the bleak lives of sharecroppers he would have seen in rural North Carolina. In her description of the painting, Shawnya Harris points out how "the old horsehoe is turned upside down, which, according to the artist, represents the presence of 'bad luck' in some southern communities."

In addition to the private collections that lent to his recent retrospective, McMillan's work can be found in the the collections of Bennett College, North Carolina Central University Art Museum, Guilford College and Virginia State University. Harris pp. 11-15, 48.
Set Alert for Similar Items 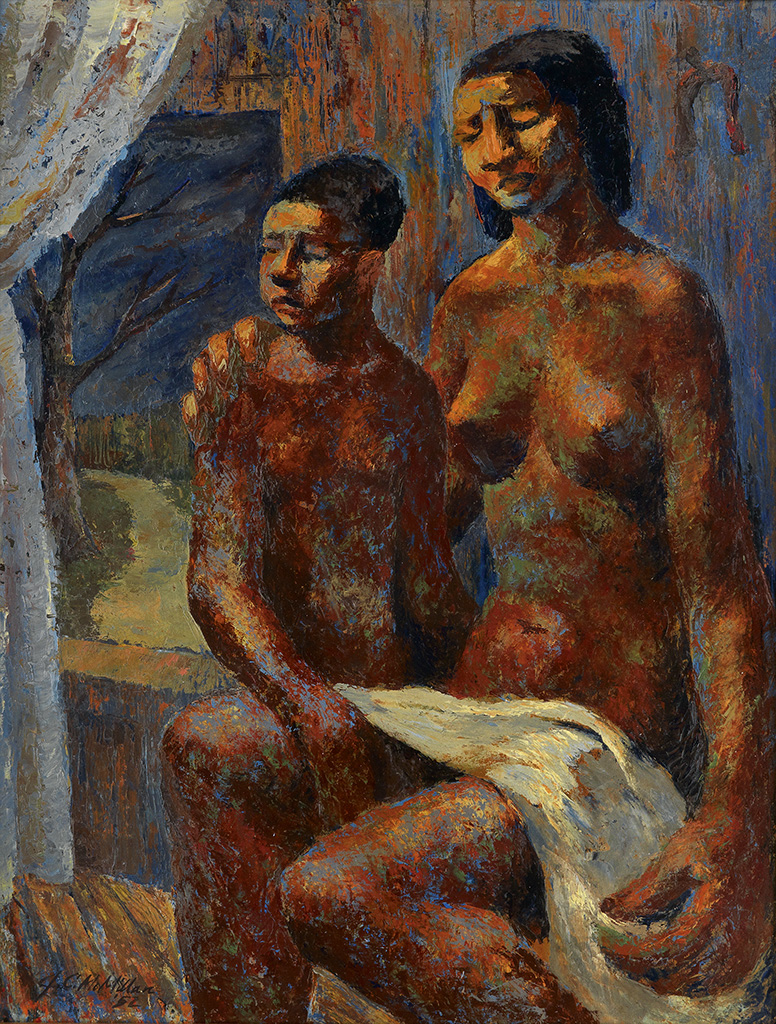