Price Realized: $ 7,500
Price Realized: $ 9,750
?Final Price Realized includes Buyer’s Premium added to Hammer Price
Estimate: $ 8,000 - $ 12,000
JAMES SCRIMGEOUR MANN (1883-1946) WHITE STAR LINE / R.M.S. OLYMPIC & TITANIC. Circa 1911.
20x24 inches, 50 3/4x61 cm. T. Forman & Sons, Nottingham.
Condition B+: chipping, minor losses and restoration at edges of mat, not affecting image; minor abrasions in right image; affixed to period mat at edges of recto, as issued. Paper. Matted and framed.
An exceptional and rare artistic rendition of the sister ships Olympic and Titanic, likely completed before the ships were officially launched. The Olympic took her maiden voyage on June 14th, 1911, and the Titanic slightly less than a year later, on April 10, 1912. Ocean liner companies would often promote sister ships (which looked alike) by issuing posters in anticipation of the launch of the first of the two ships. Such is the case here, showing the Olympic, recognizable by her unenclosed upper deck. It should be noted that when the Titanic was launched, she weighed 46,328 tons, heavier than her sister ship, as a result of enclosing one of her upper promenade decks - a fact that would have been unknown to the publicity department before construction was finished. This rare poster has appeared at auction with its exterior mat bearing the text in Swedish, promoting the White Star Line's Swedish ticket agent, suggesting that the company used the image in different countries merely by changing the mat to reflect the information in different languages. The printer, T. Forman & Sons, mostly did work for the Cunard Line and other liner companies. It has also been pointed out as unusual for there to be a military vessel in the image, but it most likely serves as visual support to Britain's overall domination of the seas. Mann was a prolific maritime painter who also designed several posters for different shipping companies.
Set Alert for Similar Items 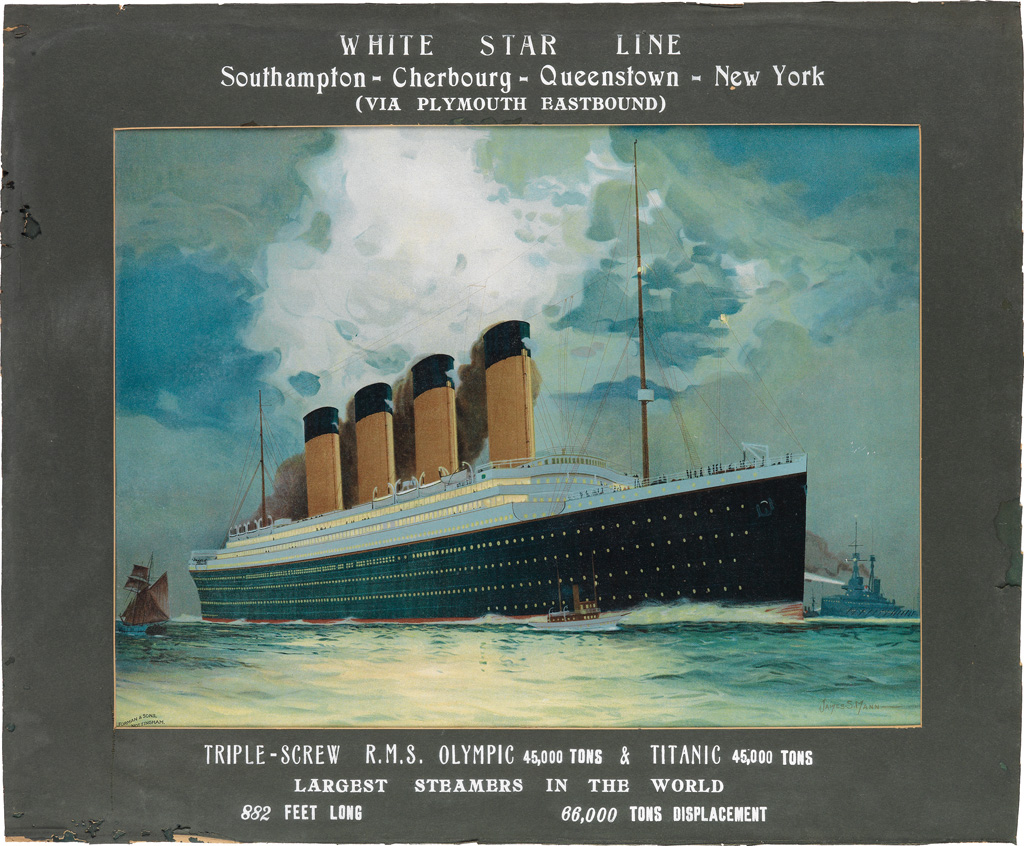