Johns (born 1930) was born in Augusta, Georgia, and grew up in South Carolina before moving to New York to study art in 1948. He enrolled in classes at the Parsons School of Design, but after only one semester was drafted to the Korean War. Johns was stationed in South Carolina and Japan for several years, returning to New York again in 1953. During the 1950s, he fostered several key relationships with fellow New York artists, notably Robert Rauschenberg, whose early friendship was vital to Johns' artistic trajectory. Rauschenberg introduced Johns to Dadaism (which became a significant influence on his work), encouraging him to see the Arensberg Collection at the Philadelphia Museum of Art, where he encountered the work of Marcel Duchamp. Johns was struck by Duchamp's use of everyday objects and his blatant redefinition of what could constitute a work of fine art. Johns and Rauschenberg both helped lay the foundation for future movements, including those as disparate as Minimalism and Pop Art.

From Johns' first solo exhibition in 1958 (organized by Leo Castelli and from which The MoMA, New York, purchased three of his early paintings), he catapulted contemporary American Art forward, shifting it from the extremely personal, subjective nature of Abstract Expressionism toward a more dispassionate, universal and stylistically controlled approach. He retained the painterly quality of the Abstract Expressionist artists, building up various media to create rich textures, but rather than gestural, abstract compositions, Johns depicted everyday symbols and objects. The American flag was a recurring theme in his work, as were targets, numbers, and maps, all instantly recognizable and mundane symbols. In these depictions, Johns remained emotionally detached from his works--in stark contract to his Abstract Expressionist predecessors who sought to construe the emotional landscapes of their imaginations. Johns' canvases held recognizable, real world symbols, already imbued with myriad meanings, but presented in new ways. His presentation and manipulation of everyday objects, such as the ordinary Savarin coffee can filled with paint brushes from his studio in this iconic lithograph, led the way to Pop Art, in which the appropriation of imagery from popular culture and advertisements was a central tenet. Field 258.
Set Alert for Similar Items 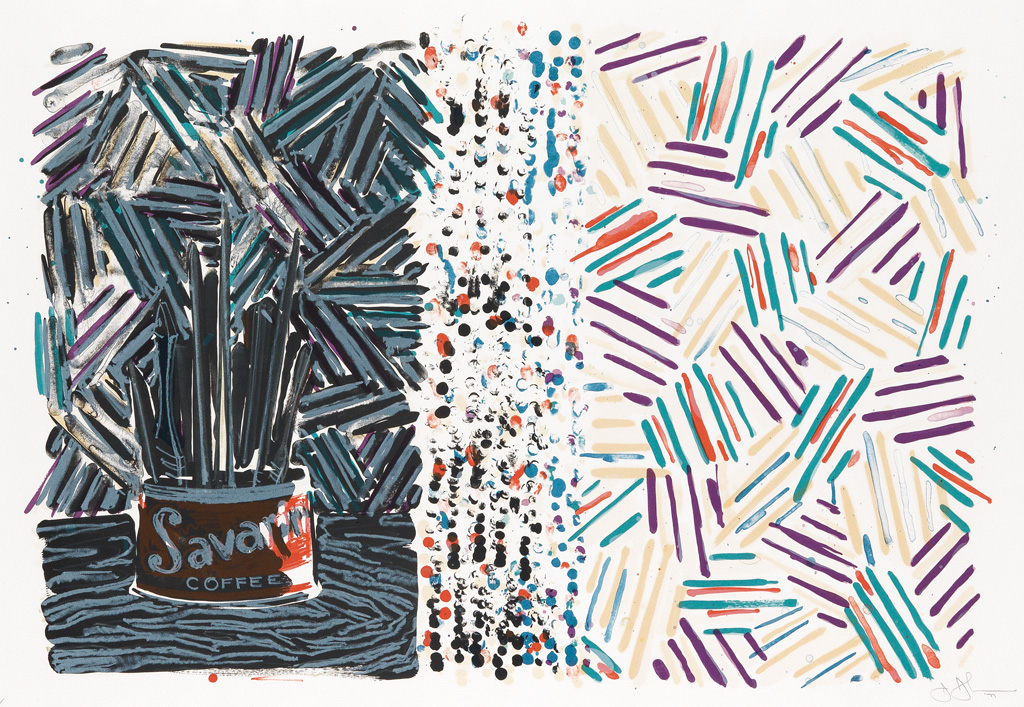