Price Realized: $ 3,200
Price Realized: $ 4,000
?Final Price Realized includes Buyer’s Premium added to Hammer Price
Estimate: $ 3,500 - $ 5,000
THE RISING THREAT OF ANTI-FEDERALISM AND THE PRESIDENT'S COMMITMENT TO PEACE JAY, JOHN. Autograph Letter Signed, as Governor, to Theophilus Parsons, expressing relief that anti-Federalists in MA are not as powerful as they seem, worrying that passions are making the people insensible to the danger facing them, stating that the president [John Adams] is obligated to send envoys to France if they are received respectfully, and expressing regret at having been unable to meet with Rev. Mr. Andrews. 1 1/2 pages, 4to, with integral address leaf; scattered foxing and soiling to address leaf addressed in holograph, folds. Albany, 1 July 1800
Set Alert for Similar Items

". . . Serious apprehensions were entertained that antifederalism had gained considerable Ground in Massachusetts; but I am happy to find from the facts you state, that appearances do not warrant the Conclusions which have been drawn from them.
"The present aspect of our affairs is far from being agreeable. Atho' peculiarly blessed, and having abundant Reason for Content & Gratitude, our nation is permitting their Happiness to be put in Jeopardy by the worst passions, inflamed and directed by the most reprehensible means. Whether the good sense of the People will avert the Dangers which threaten them is yet to be seen.
"If the sound and leading Friends of their country could concur in opinion as to men and measures, their Efforts would probably be successful; but unfortunately there is too little unanimity on many points, and the want of it exposes us to the Hazard of many Evils.
"It really appears to me that the mission of our Envoys to France has been treated with too much asperity. The President declared to the Congress, that he would never send another Legation to Paris until he rec'd assurances that it would be properly respected. As that Declaration seemed to imply that when he should receive such assurances, he would again send Envoys, it was not unnatural that he should conceive himself bound in Honor to do so. His attachment to the Dictates of Honor and good faith, even supposing it to have been too scrupulous, was amiable and praiseworthy. Whether that Declaration was advisable, and whether the nomination of the Envoys was made exactly in Season, are questions which, like others of the same kind, may receive different answers from different men; but having nominated the Envoys and received the requisite assurances, I for my part consider the sending them as a matter of Course, and I do not concur in opinion with those Gentlemen who think they should nevertheless have been detained. . . ."
Published in Henry P. Johnston's Correspondence and Public Papers of John Jay vol. IV (New York: Putnam, 1890-93), 274.
In 1800, Elbridge Gerry joined the Democratic-Republican party recently formed by Thomas Jefferson and James Madison and ran in the Massachusetts gubernatorial race. Sympathies in that state appeared to be shifting in favor of the new party, but Gerry lost the race to Federalist Caleb Strong. John Jay, a Federalist who had negotiated in 1794 the trade treaty with Great Britain that bears his name, worries in this letter not only that Gerry and his party might gain influence in Massachusetts, but that the views of Democratic-Republicans--which favored violating the Jay Treaty, forming a military alliance with France and going to war with Great Britain--might bring the entire country to ruin. President John Adams, a Federalist at the time, expressed in his first address to Congress a commitment to the principle of peace, sending Gerry in 1797 as part of a commission with other envoys to negotiate with France, which, because of its war with Great Britain, had become increasingly hostile to the U.S. after the signing of the Jay Treaty. After French agents had solicited bribes from the commissioners giving rise to the XYZ Affair, Adams withdrew the envoys and the threat of war with France grew. Jay's other worry in this letter, then, is that insufficient negotiation with France also risks ruin, if not from war, then from lack of honoring one's principles. 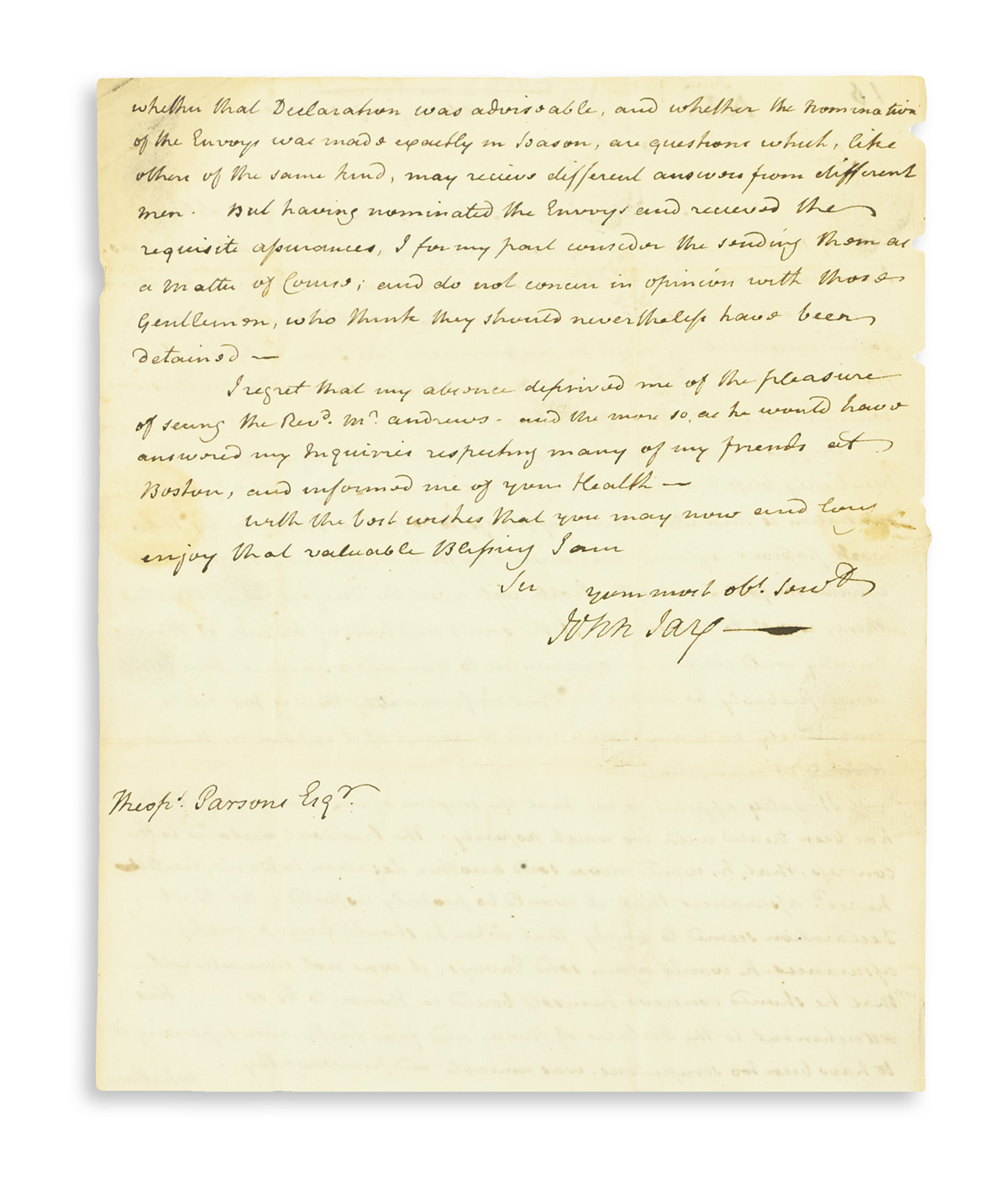 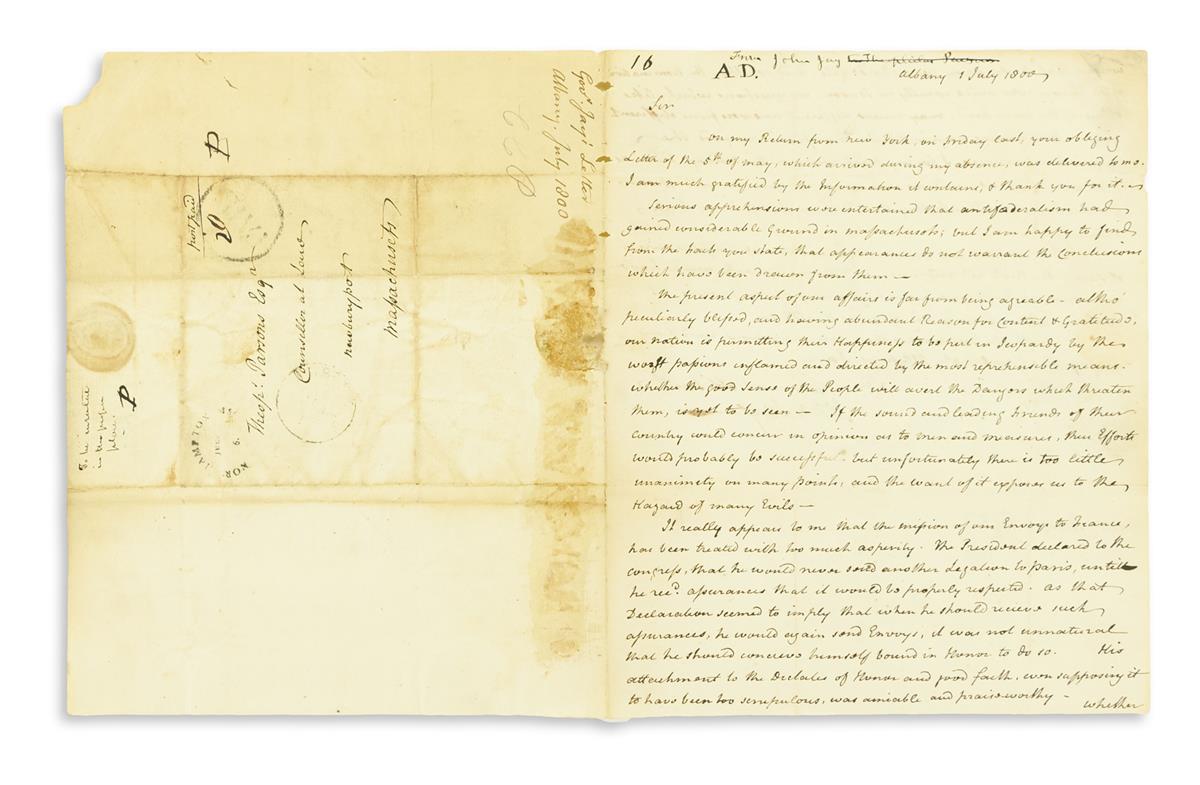