Harlem, Sunday Morning is described as the artist's "favorite painting" in Romare Bearden and Harry Henderson's chapter on the artist in A History of African-American Artists. Despite giving many of his works away, "Delaney's favorite painting, Harlem Sunday Morning, remained in his possession. It depicts masses of people going to church in Harlem, women and children in their best clothes and a man strumming on a guitar. 'It's a story that appeals to me, it's got the feeling that I'm always after,' the artist said." This is one of the earliest and largest paintings by Joseph Delaney to come to auction.

In 1930, at the age of 26, Joseph Delaney moved from his native Tennessee to New York, where he studied at the Art Students League with Thomas Hart Benton. In 1932, he exhibited in the first Washington Square Outdoor Art Show, where he continued to work as a sketch artist. From 1934 to 1940, Delaney worked for the WPA on projects in New York City, including the Index of Design for the Metropolitan Museum of Art. His wartime paintings from this mid-1940s period are some of his largest and most complex paintings of outdoor scenes, including Penn Station in Wartime, 1943, in the Whitney Museum of American Art. 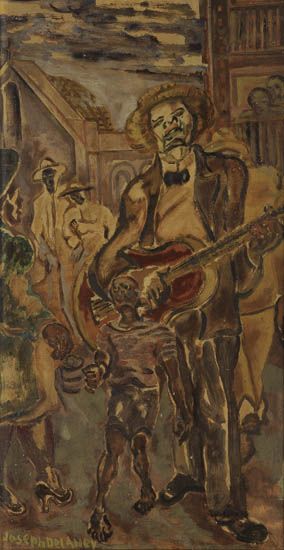