Price Realized: $ 14,000
Price Realized: $ 16,100
?Final Price Realized includes Buyer’s Premium added to Hammer Price
Estimate: $ 5,000 - $ 7,500
JOSEPHINE BAKER. 1931.
611/2x421/2 inches. H. Chachoin, Paris.
Condition B+: restored losses, repaired tears and creases along vertical and horizontal folds; restoration along edges.
Chassaing was clearly around when Colin designed the Bal Negre and Le Tumulte Noir, although whether or not he actually met Josephine during that time is undocumented. Whether he did or did not is not as important as the fact that four years later he designed a poster for her; and it was likely his most prestigious commission and one of which he would have been exceedingly proud. The brown color that he was fond of using actually works with her skin color, the stylization of her hair and eyes is excellent, the use of white paper as part of the design is clever and the inclination of the typography and the dividing plane on her face are both well positioned. That said, the poster's timing makes it difficult to explain. From September 26, 1930 Josephine was the reigning star at the Casino de Paris in her show Paris qui Remue (with a poster designed by Zig), an undisputed triumph in the city of lights. The show ran for 13 months, taking her through the end of 1931. When the show ended, she was the toast of all Paris, the "queen" enjoying her success and celebrity with an endless string of parties until her next show, Joie de Paris, opened on December 3, 1932 (with a poster designed by Colin!). Why, in between shows, with no theatrical or musical project happening, would she commission a poster? She might very well have been making a few appearances here and there, but for such small events a poster like Chassaing's would not have been needed. This was, for obvious reasons, a big deal for Chassaing. The only known photograph of him depicts him at his easel posing with this poster. Clearly, it ranks highest in his mind of all the designs he created. Could it be a self-promotional image he designed with or without her agreement? Did he have a short affair with her and get the commission as a favor (which would represent the reverse of Colin's system)? Unfortunately, we will never know. The poster is so rare that it certainly did not have a big circulation, which excludes the possibility that it was used in the lobby of the Casino de Paris. This is, beyond a doubt, Chassaing's best poster and Josephine clearly inspired him.
Set Alert for Similar Items 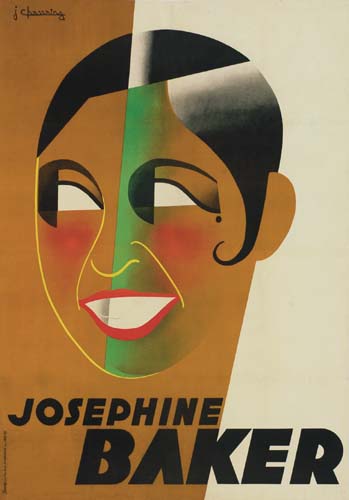