With a certificate of authenticity from the Karel Appel Foundation, Amsterdam, April 2014.

Appel (1921-2006) was a Dutch-born artist who grew up and studied in Amsterdam before living and working in various cities abroad such as Paris, New York and Rome, eventually settling in Switzerland. His father was a barber and despite the expectation for him to follow a similar career path, Appel fostered an early interest in art, completing his first canvas at the age of only fourteen. He studied at the Royal Academy of Fine Arts in Amsterdam from 1942 to 1944, and in 1946 had his first solo show in Groningen; the same year he also participated in a young painters show at the Stedelijk Museum, Amsterdam. During this time, Appel was fostering relationships with like-minded, experimental European artists who were searching for an appropriate artistic response to the atrocities of the war. In 1946, Appel visited Denmark and spent time with a group of Danish painters who, in an attempt to return to a more naïve moment in time, explored a deeply felt connection with folk art and its perceived mythical quality. Appel was a member of the avant-garde Nederlandse Experimentele Groep, and shortly thereafter established CoBrA.

CoBrA was a Marxist-sympathizing International art group, disbanded after just 2 years, formed in the Café Notre-Dame, Paris, on November 8, 1948. The moniker is an acronym of the cities from where the founding members hailed: Copenhagen (Asger Jorn, see lot 61), Brussels (Christian Dotremont) and Amsterdam (Constant Nieuwenhuys and Appel). Burgeoning in the wake of World War II, this group of young artists sought to create a new art for a changed world. They bore witness to what the "civilized" world was capable of and, horrified by what they encountered, rejected Western art and culture to seek inspiration elsewhere; they drew from nontraditional forms such as outsider art, folk and tribal art, and childrens' art. They worked spontaneously and with bright, bold colors, and valued creativity and experimentation with techniques, application and materials. CoBrA artists shared stylistic traits with various earlier German Expressionist groups, such as Der Blaue Reiter, and adopted philosophical tenets from Surrealism, the hegemonic movement of the time, such as the intention to capture the inner workings of the unconscious mind.

CoBrA has been described as Northern Europe's brand of Abstract Expressionism, the American art movement which developed out of New York City in the 1940s around artists such as Jackson Pollock, Mark Rothko and Robert Motherwell. The term Abstract Expressionism was not first applied to American art, but to abstract-bent European artists around 1920 in the German Expressionist magazine Der Sturm. The first instance of this term in America came in 1929 from Alfred Barr, the founding director of The Museum of Modern Art, New York, describing the work of Wassily Kandinsky. The term was not officially coined until 1946 to describe a sphere of influence and the proverbial American Abstract Expressionist school. Abstract Expressionists practiced Automatism, fusing this Surrealist technique with the expressive power of abstraction, but at the core of Abstract Expressionism was the exploration of spontaneous forms. Appel and the other CoBrA artists' works differed as they did not abandon form completely, but alluded to tangible things. Tachisme (a term first used in 1951) was another contemporaneous strain of AbEx-esque movements, a French style of abstract painting that was part of a larger European movement born in Paris known as Art Informel. These movements all emerged in a postwar world which called for fresh modes of expression.
Set Alert for Similar Items 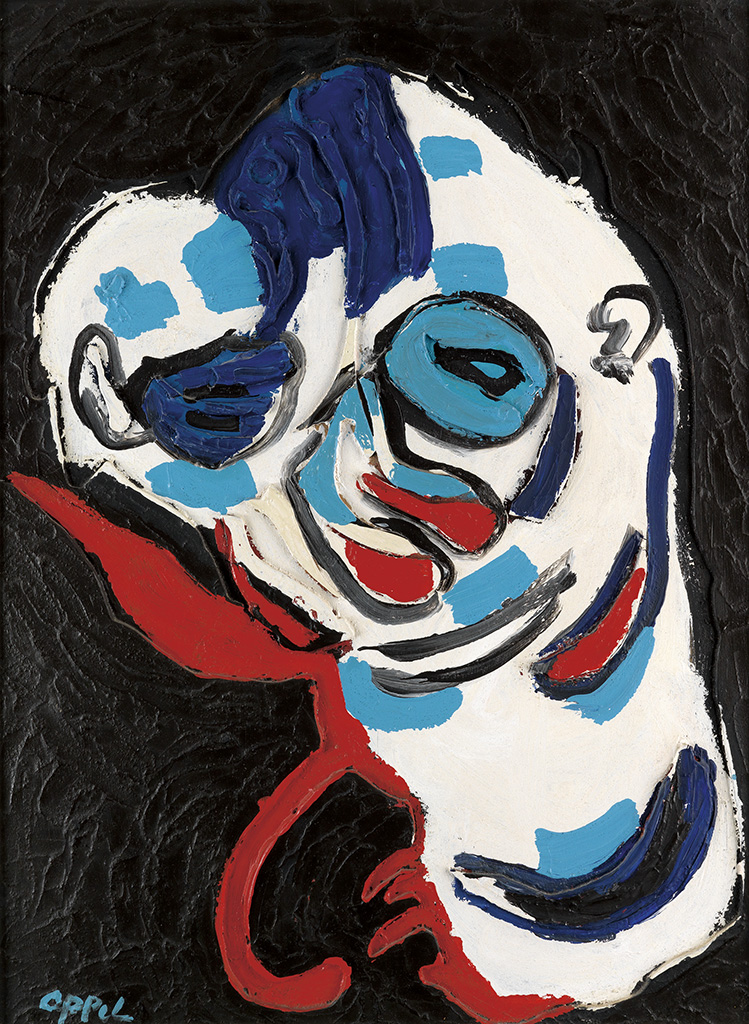