Price Realized: $ 20,000
Price Realized: $ 25,000
?Final Price Realized includes Buyer’s Premium added to Hammer Price
Estimate: $ 20,000 - $ 30,000
KOLOMAN MOSER (1868-1918) FROMMES KALENDER. 1899.
37 3/4x24 1/2 inches, 96x62 1/4 cm. A. Berger, Vienna.
Condition B / B+: repaired tears at upper right and central left edges, into central image; minor repaired tears, creases and abrasions at edges and along vertical and horizontal folds; repaired pin holes in corners. Mounted on Japan.
Koloman Moser, a founding member of the Austrian Secession movement and a professor at Vienna's School of Decorative Art, co-founded the Weiner Werkstatte with fellow artist Josef Hoffmann. Book design, graphic design, interior design, jewelry, furniture, silverware, fashion and ceramics were just some of the fields in which Moser worked. Much of his graphic work was done on behalf of the Secession and his commercial posters are quite rare. Carl Fromme, one of the largest pocket calendar printers in Europe, used this image on posters from 1899 to 1914. The design "was considered very advanced in 1899, with its large scale portrayal of the motif and the almost complete renunciation of interior drawing. The silhouette of the body is in mysterious contrast to the realistically portrayed head and hands. The unwavering gaze of the woman underlines the symbolism of the design: the Norn [ancient Norse goddess of fate] with the hour-glass and snake-ring embodies the eternal circle of life and the running out of time" (Vienna Secession p. 45). As the poster was originally used in 1899, the waning sand in the hourglass quite naturally can be assumed to be the coming of the end of the century. The poster was printed with three different background colors: yellow, red and blue. rare. Austrian Posters p. 12, Vienna Secession p. 44 (var), Denscher p. 136, Weill 196 (var), Word and Image p. 42 (var), Modern Poster 43 (var), Art Nouveau p. 211, German Expressionist Art 34.
Set Alert for Similar Items 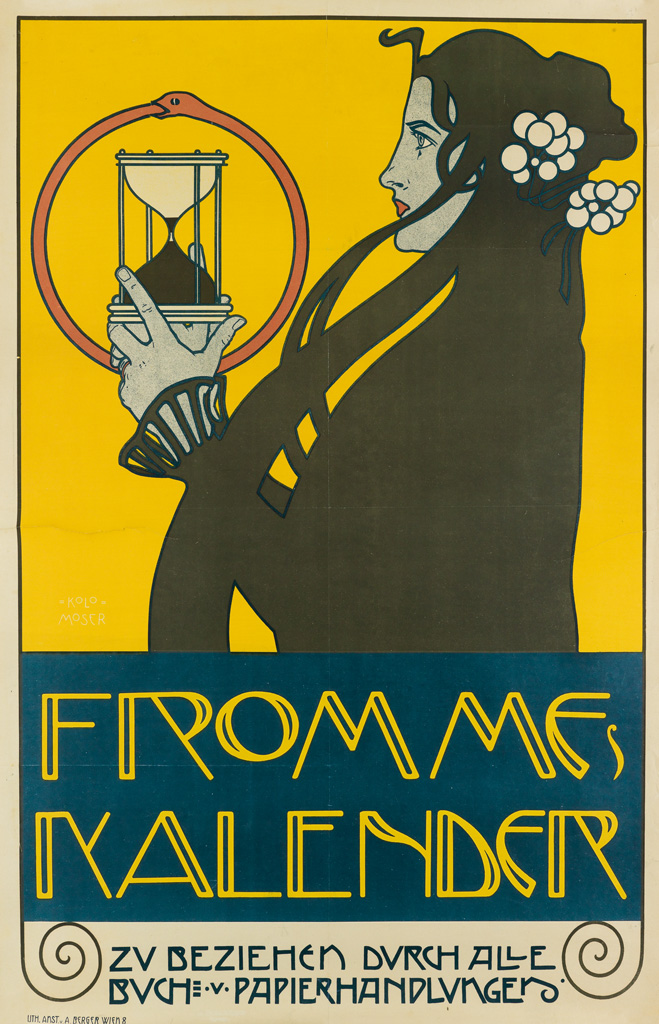