Price Realized: $ 13,000
Price Realized: $ 16,250
?Final Price Realized includes Buyer’s Premium added to Hammer Price
Estimate: $ 12,000 - $ 18,000
LADISLAV SUTNAR (1897-1976) VYSTAVA MODERNIHO OBCHODU / [MODERN COMMERCE EXHIBITION.] 1929.
18 1/4x24 1/4 inches, 46 1/4x61 1/2 cm. Melantrich, Prague.
Condition A: small repaired tear at right edge; unobtrusive horizontal fold; diagonal crease in upper left text. Matted and framed.
Ladislav Sutnar was both a professor and practitioner of design. In addition to teaching at Prague's State School of Graphic Art, he was also a pioneer in the fields of informational graphics and corporate identity and was the official designer of the Czechoslovak Government's exhibitions in foreign countries (winning several awards for his work in this field). His ground-breaking Functionalist work was largely a fusion of Bauhaus ideas and typography, Constructivism, and his own work with photomontage and design. In the mid 1920s he is believed to be the first Czech designer to have incorporated photomontage into poster design (Sutnar p. 305) and by the 1930s, photomontages figured prominently in many of his book jacket designs and were a hallmark of his work. This poster promotes one of three trade fairs occurring in Brno, Czechoslovakia's second largest city, in the late summer of 1929 (the other two, a Brewery & Malting exhibition and an exhibition on Modern Women are mentioned at the bottom of the poster), The image boasts three of the city's newest and finest functionalist architecture projects: the Avon Hotel (seen at left), the Commercial and Industrial Palace and the Commercial Tradesmen's Pavilion. Universally considered to be one of Sutnar's finest designs, this poster "poetically cumulates current communication symbols [into] something of a Functionalist version of the 'pictorial poem' . . . [it reflected] the approaches of Cubist and Constructivist pictorial collages" (Sutnar, p. 305). Writing in 1961 in Visual Design In Action, Sutnar stated: "In our 'visual civilization,' words are superseded by images, drawings, graphs and other visual symbols which convey the message faster, more reliably and more convincingly than verbal descriptions." This is the Czech version. Rare. We have found no other copy at auction in over 20 years. Sutnar 546, Avant Garde p. 142, Weill 460, Czech Functionalism 271, Czech Avant Garde p. 61, Modernism 129, Trade Fair 61, Berman / Juan March p. 142, Clash of Ideologies p. 82, Witkovsky pl. 44.

From the estate of Alexander Kaplen.
Set Alert for Similar Items 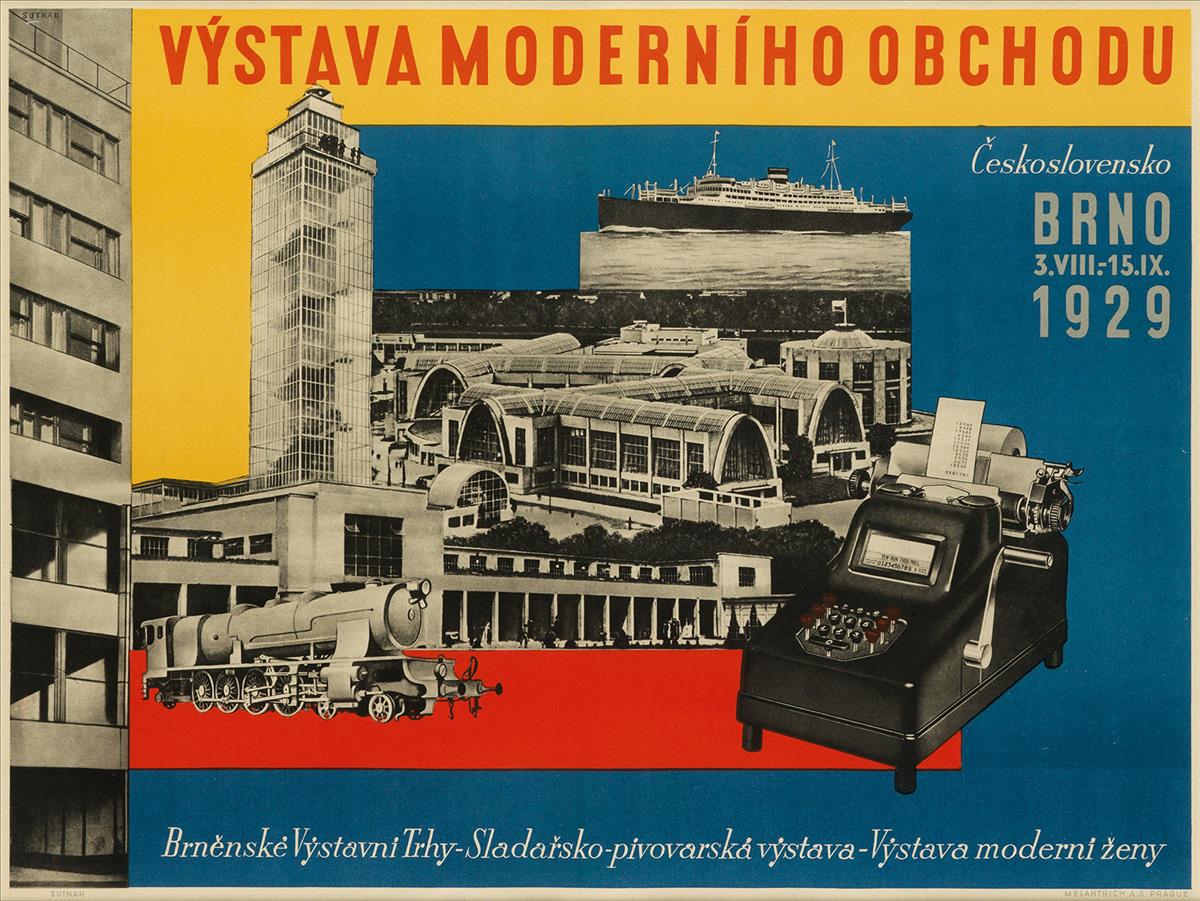