Price Realized: $ 65,000
Price Realized: $ 81,250
?Final Price Realized includes Buyer’s Premium added to Hammer Price
Estimate: $ 40,000 - $ 60,000
LAURIE, ROBERT AND WHITTLE, JAMES. The Complete East-India Pilot, or Oriental Navigator: Being an Extensive Collection of Charts, Both General and Particular, with Plans of Bays, Roads, and Harbours, Appearances of Land, &c. &c. for the Navigation Not Only of The Indian and China Seas, with those of New Holland, but Also of the Seas Between the British Isles and the Cape of Good Hope. 113 engraved maps on guards (of 114, lacking first map of the World on Mercator's Projection) mostly double-page or folding, two letterpress titles and index leaves, dedication. 2 volumes. Large folio, 25x20 inches, contemporary calf, boards detached, partially disbound, worn, wants for rebinding; charts with occasional instances of stains, foxing, offsetting, and small areas of dampstain, few with small tears at fold intersections, but overall strong condition. Pencil ownership markings on front endpapers "The property of Wm. Bush Jr. Purchased of John F. Borman January, 1817." London: Laurie and Whittle, 1797
Set Alert for Similar Items

the pinnacle of eighteenth-century navigational chart-making. With beginnings as assistants to print and chart publisher Robert Sayer, the partnership of Laurie and Whittle succeeded the firm upon Sayer's death in 1794. Their East-India Pilot was a monumental publication, providing superbly beautiful and accurate charts containing all the information navigators required to sail from England to the trade ports of the East Indies and China. The charts show vast improvements upon the already exacting information of Mannevillete's Neptune Oriental from several decades earlier, supplemented with the most recent discoveries of the skilled British Admiralty and East India Company captains charting these faraway waters.

These charts describe the coasts of the English Channel, Spain, Africa, Brazil, India, Malaysia, Singapore, Java, Sumatra, the East Indies, Philippines, and China with the final chart detailing the eastern coastline of New Holland. 100 of the charts bear Laurie and Whittle's imprint of 1794; 3 bear their imprint of 1795; 4 with 1796; 1 with 1797; 4 charts bear the undated imprint "Printed for Robert Sayer, No. 53 Fleet Street", 1 chart with no imprint [but Sayer.] The important "Chart of the China Sea" bearing the imprint of Robert Sayer appears to be an intermediary state: after the known first state with a variant title and an imprint of R. Sayer and J. Bennett Chartsellers 1780, but before the believed second state titled the same as the present, but with the imprint changed to Laurie and Whittle, 1794 (Henry Talbot, 1970). One chart shows the tracks of two ships from Cape Town to Hong Kong outlined in old hand-color: Captain Henry Bond for the Royal Admiralty in 1792 and Captain Thomas Butler aboard the Walpole in 1794. Phillips Atlases 3169 (no edition with the 1797 title-page listed). 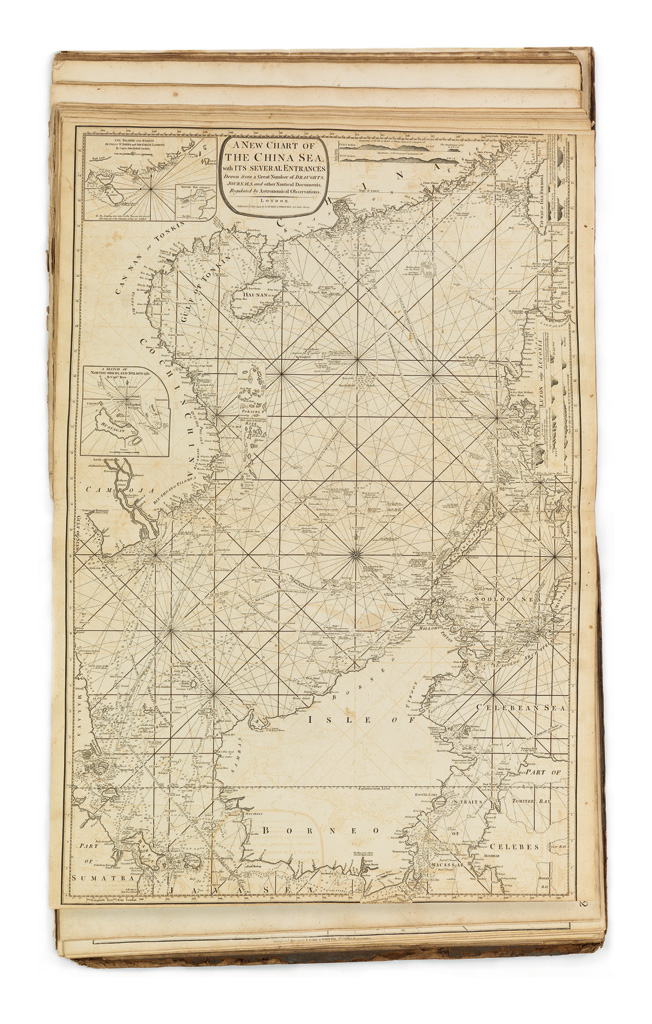