Unsold
Estimate: $ 4,000 - $ 6,000
LEONETTO CAPPIELLO (1875-1942) PUR CHAMPAGNE / DAMERY-EPERNAY. 1902.
54 1/4x38 3/4 inches, 138x99 cm. P. Vercasson & Cie., Paris.
Condition B+: repaired tears and creases at edges and in image; restoration in image.
Cappiello arrived in Paris in 1898 and quickly became famous thanks to his caricatures in Le Rire. Through 1904, he created a caricature portrait gallery of all the major Parisian actors and the elegant lines of his simplified drawings created a revolution in the world of illustration. In 1899 he designed his first poster, for Le Frou-Frou, a magazine to which he frequently contributed. His earliest posters were simply enlargements of his caricatures, imbued with a certain sense of movement (which he would later call "the arabesque"), and with brightly colored backgrounds. This champagne poster is a classic example of his early period. It also provides insight into how Cappiello approached advertising. An unrealized maquette in the Wine Spectator Collection shows this same image with the text "Elixir Peruvien." Thus it appears that the image was first offered to another client. It seems that after its rejection, Vercasson, the printer, sold it to Damery! Furthermore, it is apparent from looking at three of Cappiello's posters from the same year, which share tremendous similarities (Pur Champagne Damery, Champagne Delbeck, and Champagne de Rochegre), that the shrewd Vercasson had no compunction about selling different sketches, clearly prepared for the same product and client, to competitors within the same field! Of them all, however, Champagne Damery, with its swirling movement, is the most charming. Cappiello p. 121, Wine Spectator, pl. 158-160 and 162.
Set Alert for Similar Items 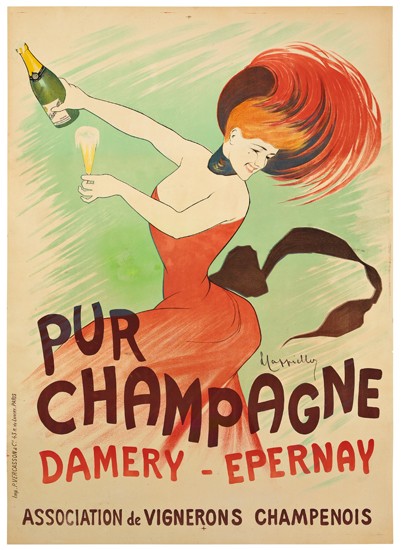