Price Realized: $ 10,000
Price Realized: $ 12,500
?Final Price Realized includes Buyer’s Premium added to Hammer Price
Estimate: $ 4,000 - $ 6,000
LETTERS TO HIS FAMILY WHILE SERVING IN THE U.S. ARMY KURT VONNEGUT. Archive of 12 letters Signed, "Kay" or "Kurt Jr." or "Pfc. Kurt Vonnegut, Infantry," including 6 illustrated, to his parents or brother Bernard, most in pencil, including 7 Autograph Letters, 4 Typed Letters, and a postcard, on various subjects including the War, love, alcohol, art, etc., sometimes written in the style of a dialogue. Together 22 pages, tall 4to or smaller, mostly on ruled paper, some on pale blue or pale yellow paper, some with loose-leaf punch holes along left edge; minor scattered soiling or smudging (but still legible), few leaves with closed tears at edges, folds. Np, 1930s-40s
Set Alert for Similar Items

[Early 1930s], ALS, "love Kay," written to his father in a childish hand: "My dad[d]y long legs is still excited about going to Indianaplois [sic]. . . . I wrote this letter the day you left. I wrote this letter with ink. Try to send a mastscot [sic]. alicess [sic] oscar Bug [ink drawing by his sister Alice showing an insect wearing shoes] send his love. . . ." On verso is a similar letter to his father headed by a holograph ink drawing showing a long-legged spider.

"Methinks if I am returned to troops it will be to the Artillery. . . .

"Life in Knoxville becomes more bearable as more loop-holes in the blue laws come to light. . . ."

30 April 1946: ". . . I have one helluva poor time of it concentrating. . . . I'm full of spectacular aspirations and faith in the field of Anthropology, but sometimes--like this one--I get frantically bored with it.

"Jane is writing an article. . . . Methinks she'll sell it. As you know, I've submitted a couple of things as yet uncommented upon. It is surely a temptation to throw over this filthy town and my frequently baffling studies . . . ."

[1940s], ALS, with pencil sketch showing a bottle of wine and mug of beer across which is a banner bearing a swastika and the word "VERBOTEN!": "An old guard State's Rights man, I say let Tennessee secede from the Union if she wants to. I've done more than just dream: I've written them an anthem and designed a flag--two blivits rampant on a field of mauve. The Anthem is written to the strains of Moe I. Bloom's deathless 'When the Red Red Robin Comes Bob Bob Bobbin' Along.' The fifth stanza runs--'The Civil War ain't over yet / Ho one will stop us now, you bet. / Hail proud Tennessee, enemy of tyranny . . . etc.' . . . .

". . . That up there is a political cartoon; true, rapier-like and fearless. Knoxville is bone-dry and kept so by the Baptists, Methodists and Bootleggers. Beer is 3.2 and Ale is beer with grape flavoring. . . .

"P.S. . . . If you think this letter is funny please say so. I'd like to try making a living at it and have no honest critics. This is not fishing but a cold, hard-put business question. Reply in kind."

8 July 1944, ALS, with pencil sketch showing a cartoon bald eagle between the words "US" and "ARMY" above a ribbon with the motto, "Semper Confusis": "It has been a fancy of mine, from time to time, to debate as to who has made the greatest forward strides during the past fifty years: the Negro, the Irishman or the female philosophy student. These three turgid days just past have given me abortive cause to observe and consider the last-mentioned minority group.

". . . She is in love with a Naval Air Cadet who, in his freshman year at Swathmore . . . stated that he wished to be a professor. He has given the Coxes a Picasso and a Rousseau reproduction which hang in the living room. This proves he's a pretty arty old shit beyond a doubt. I'm thinking of swamping them with enough Last Suppers, Mona Lisas and Blue Boys to paper the whole damn living room just to show them how cultured a person can be. . . ."

[Circa 1944], ALS, with pencil sketch showing a crest with the motto, "Vice, Indolence, Lassitude": ". . . Everyone has a talent or an inclination toward something worthwhile. If he's not born with one, his parents assign one to him. Why in hell did I end up with 'Young Kurt is quite a promising writer--they say.'? You and God's mouthpiece, Alice, write circles around me.

". . . My situation here is briefly this: I'm pulling down $54/month as a Pfc. I'm in advanced mechanical engineering. General Marshall requested that I take this course. When I balked he pulled rank on me. . . .

"Jane's mother having gone insane represents a problem of miserable complexity. If we marry there'll be no children if I can help it. There's nothing either of us wants more than children. I dunno--haven't talked to her for eight months."

"Memorial Day" [May 30] 1946, written in all caps: "THIS IS AN URGENT FLASH: IF YOU GIVE A DAMN ABOUT YOURSELVES AND YOUR SON, THEN YOU MUST WRITE PRESIDENT TRUMAN AT ONCE AND DEMAND THAT THE UNITED STATES MAKE A DEFINITE ATTEMPT TO ORGANIZE A REAL WORLD FEDERATION. THE UNITED NATIONS IS AN ENFEEBLED FIASCO. IF SOMETHING IS NOT DONE WE SHALL ALL BE KILLED. IT IS AS SIMPLE AS THAT-CLEAN CUT, A CHOICE: LIFE OR DEATH. IT WOULD TAKE FIFTEEN HIROSHIMA BOMBS TO WIPE OUT GREAT BRITAIN. THE U.S. STOCKPILE IS ESTIMATE AT FIFTEEN-HUNDRED. . . .

"I'LL NOT FORGET DRESDEN. VICTORY: OVER ONE-HUNDRED THOUSAND HUMAN BEINGS VERY MUCH LIKE YOU TWO AND YOUR SON BURNED, CRUSHED AND SUFFOCATED IN TWENTY-FOUR HOURS. THAT WAS TNT. IF THERE IS ANOTHER WAR AND IF WE 'WIN' IT, LIFE WILL NOT BE WORTH LIVING. . . ."

Provenance: Bernard Vonnegut; thence by descent to his heirs; thence by sale to present owner. 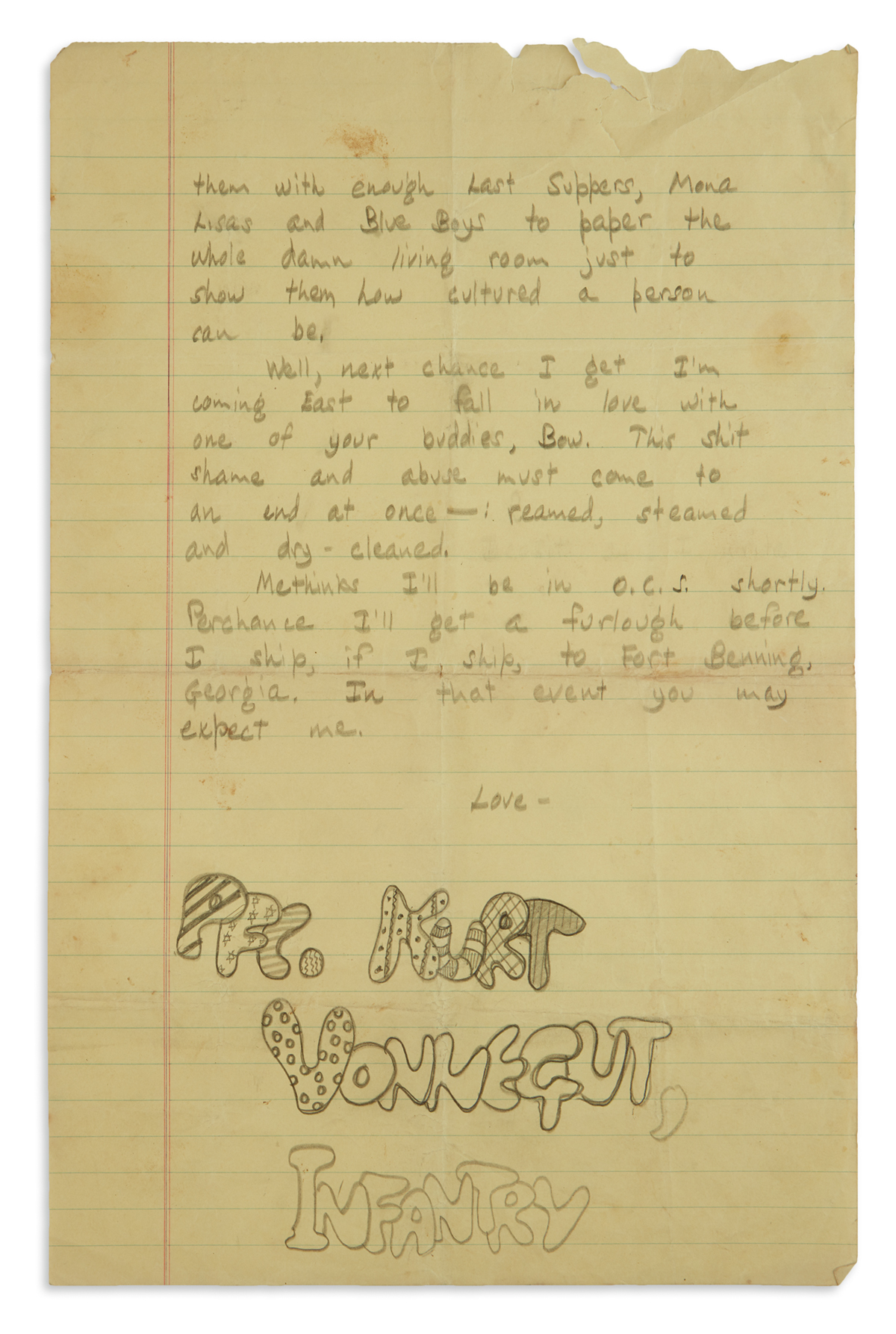 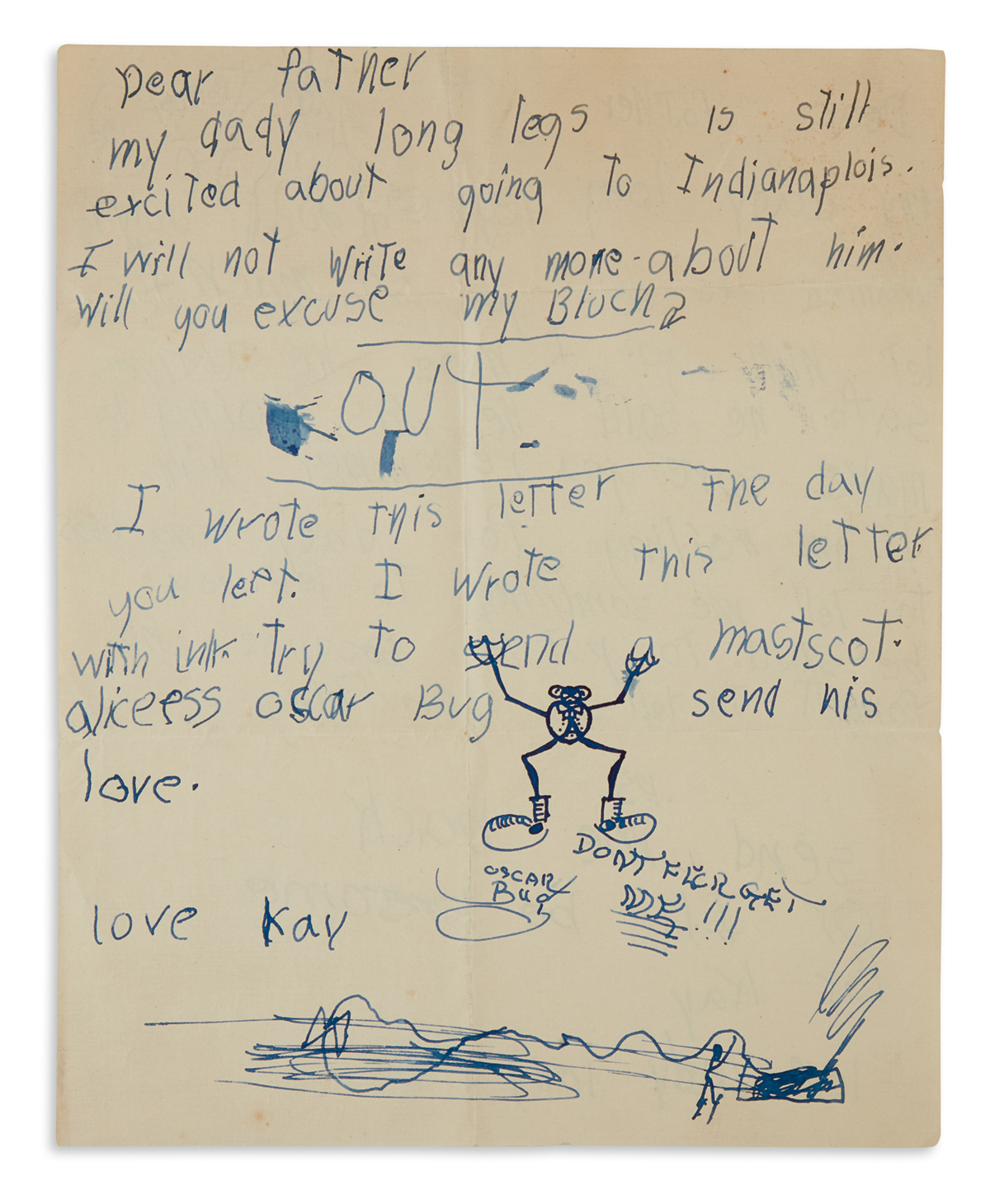