Provenance: collection of the artist, with her 17th Street Washington, DC address label on the frame back; thence by descent to the Loïs Mailou Jones Pierre-Noël Trust.

This beautiful Martha's Vineyard landscape is of an area that Jones knew well from her youth. Her grandmother worked as a housekeeper and nanny on the Vineyard, and had saved up to purchase land in Edgartown and Oak Bluffs, where Jones began spending summers in 1906. Her parents also purchased a summer home there in 1909, and Jones spent every summer on the picturesque waterfront. She maintained ties to the community while studying graphic design and art in Boston. In 1928, she finished her graduate studies at the Designers Art School of Boston. Later that year, she attended a summer session at Harvard University while working as a freelance textile designer for F.A. Foster Company. Jones had a body of watercolors from the Vineyard and a solo exhibtion at Oak Bluffs before joining the faculty of Howard University in 1930.
Set Alert for Similar Items 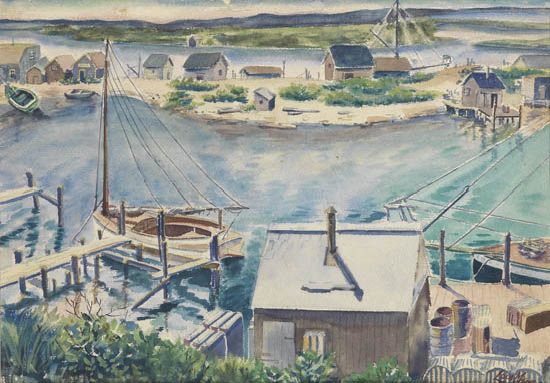