An early artist's assembled set from the first edition (of 2), with the engravings printed on cream wove and reddish brown wove paper, aside from the announced and intended numbered edition of 44 plus 10 lettered hors commerce copies (this is one of only 19 known complete examples). Signed in ink on the justification page. Two of the engravings signed in pencil, lower right. Printed at Atelier 17, New York. Typography by the Gemor Press, New York. Published by the artist, New York. Original beige linen portfolio folder with a strip of gray oil painted on the left front cover near the spine.

According to the Louise Bourgeois, The Complete Prints and Books, project at The Museum of Modern Art, New York, the first edition of this work consists of examples known or thought to have been issued in 1947 or thereabouts, as well as those assembled by the artist in the 1980s from texts and plates still in her possession (there is also a second edition, made with a new, second set of plates for the 9 engravings, that was published in 2005). The current set, using proof-like impressions, many with the artist's printing ink smudges on the sheet edges recto and verso, with sharp plate edges, on various types of wove paper (on the verso of one is an inscription "Crisbrook" in pencil), from early 1947 printings, is unique as the only known first edition set assembled by the artist—sometime in the 1970s—after the late 1940s sets and before she returned to project in the early 1980s and began assembling sets from "vintage" impressions/texts as well as working on the second edition using new plates.

Bourgeois (1911-2010) had moved to New York from her native France in 1938, after meeting and marrying American art historian Robert Goldwater; as numerous critics have observed, He Disappeared Into Complete Silence marks the transition from her life in Paris to New York. Many of the engravings reflect Bourgeois' fascination with the ever-changing New York skyline. The towering skyscrapers and rapidly-evolving cityscape were eye-opening to Bourgeois and her visual thirst as a young, emerging artist having come from Paris in the late 1930s.

Bourgeois doubtlessly endeavored for He Disappeared Into Complete Silence to mark her entry into the New York art world with a bang. She aggressively marketed the book herself, sending copies to influential critics such as the art critic, Clement Greenberg, and the literary critic, Philip Rahv. She also left copies with prominent New York book dealers Georges Wittenborn and Harold E. Briggs to promote. Bourgeois produced 2 versions of a promotional postcard for the book and took out 3 ads in Partisan Review (March, August and September, 1949) to back the project. Some of her early promotional efforts paid off; Alfred Barr became an early supporter of Bourgeois' work, acquiring an example of He Disappeared into Complete Silence for The MoMA's collection in 1947, as well as a 1950 sculpture Sleeping Figure in 1951.

Nevertheless, He Disappeared Into Complete Silence was not a commercial success. The announced edition of the book was not completed in 1947, significantly less than half of the edition was accounted for in the late 1940s and many of these copies had been given away by the artist in an attempt to gain awareness for her work. This frustrated Bourgeois and, much later, after she had become an internationally renowned artist, in the early 1980s, she began efforts to reissue the work, hoping to complete the edition she had begun so many years earlier. At this point she began assembling copies from vintage impressions of the engravings and text, when this became unfeasible, and since the original plates no longer existed, she set about producing new plates through the photogravure process and finally publishing a new edition, issued in 2005, in a total edition of 47, to benefit the Department of Prints and Illustrated Books, The Museum of Modern Art, New York.

In their execution, the engravings in He Disappeared Into Complete Silence reveal a debt to the lessons Bourgeois learned at Atelier 17, New York, under the direction of the artist/master-printer Stanley W. Hayter. Their compositions recall other Surrealist prints, particularly the etchings of Joan Miró and Max Ernst, who worked at Atelier 17 at the time, as well as Hayter's own engravings. According to the Louise Bourgeois, The Complete Prints and Books, project at The Museum of Modern Art, New York, "It is clear that He Disappeared into Complete Silence was an enormous effort for Bourgeois, preoccupying her throughout 1947. There are diary notes about visits to the Print Room of the Brooklyn Museum to study the construction of portfolios; she describes the important features of flaps, covers, and so on, also noting that, 'The text should go along with the pictures.' She later remembered that with all the organizational aspects of the project, and with the effort needed to finish a relatively large quantity of prints, her final decisions regarding the sequence of plates, and the pairings of images and particular texts, were made in great haste."

Bourgeois recollected on the theme of He Disappeared Into Complete Silence, for which she wrote all the poetry to accompany the engravings, as, "A drama of the self . . . It is about the fear of going overboard and hurting others. Controlling oneself is always the goal . . . so one will not project one's own violence on others." She noted that, "The whole trend of this book is about the lowering of self-esteem. It is a descent . . . a descent into depression. But I believe in resurrection in the morning. This is a withdrawal, but it is temporary. You lose your self-esteem, but you pull yourself up again. This is about survival . . . about the will to survive." Wye 29-38; The MoMA, Louise Bourgeois: The Complete Prints and Books 1228.
Set Alert for Similar Items 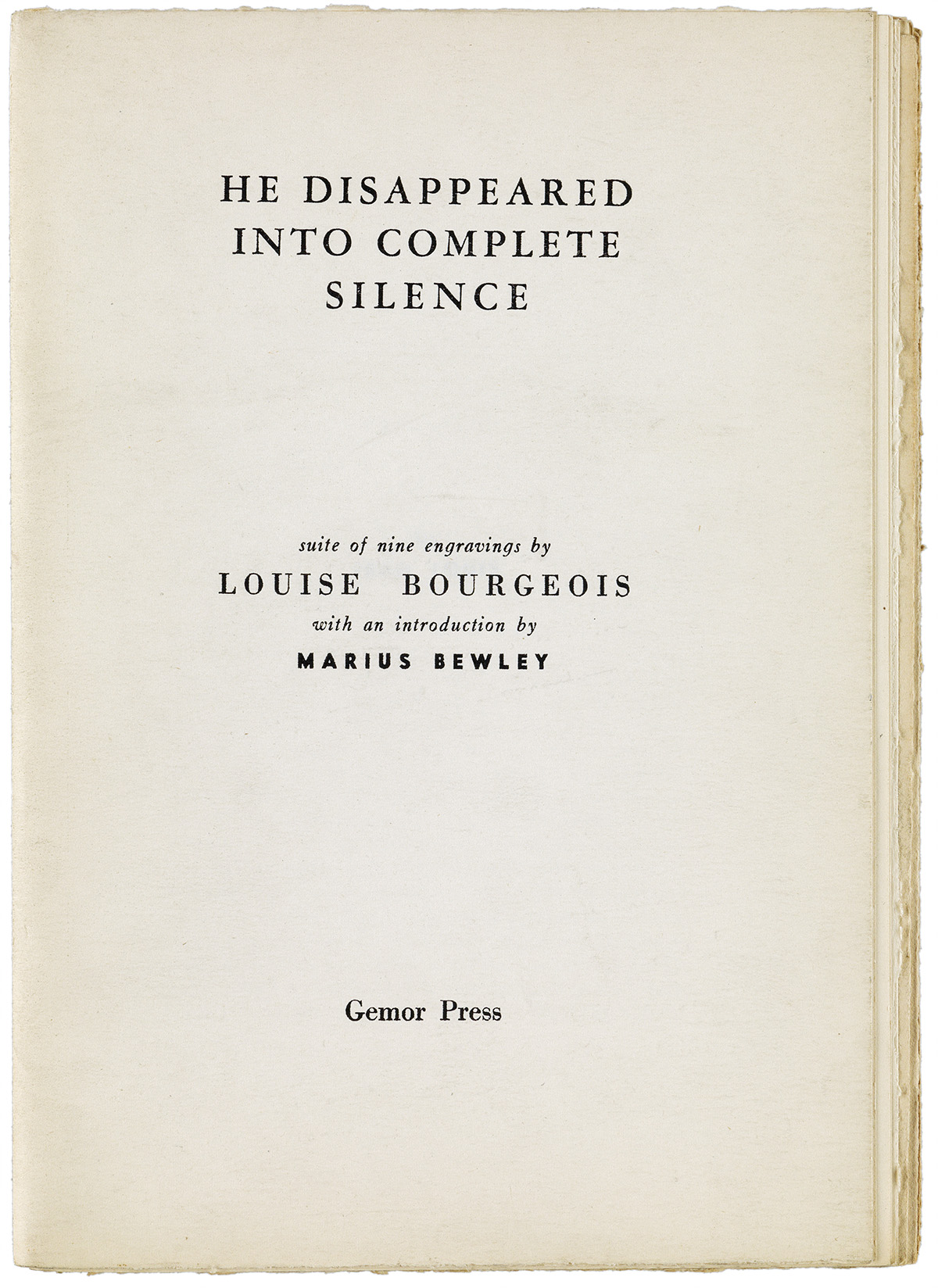