Lucas van Leyden (1494-1533) was Albrecht Dürer's (1471-1528) counterpart in the Low Countries. Despite being more than 20 years Dürer's junior, van Leyden specialized in engraving early on in his career (no doubt influenced by the already widely disseminated prints by Dürer) and appears to have had a following of eager collectors nearing that of Dürer's from contemporary accounts written around 1510-50. Like Dürer, van Leyden made very few paintings compared to engravings, similarly considering this the better path to artistic acclaim and commercial success. Notably, van Leyden made over 175 recorded engravings in an active career of some 25 years, compared to approximately 105 engravings by Dürer over roughly three decades, nearly double the production. Van Leyden's working method of incising his plates with shallower lines, compared to Dürer, would have likely decreased the amount of time needed to produce a finished engraving, though it also contributed to the fewer number of quality impressions van Leyden was able to pull from each plate due to the degenerative pressure of the printing press. Very well-inked, dark and contrasted impressions of van Leyden's engravings, like David Playing the Harp before Saul and Ecce Homo, 1510, both considered among his master prints, are exceedingly scarce.

According to Landau and Parshall, "van Leyden's art shows a preference for intimate narratives, engaging wit, and subtle irony quite alien to Dürer's more self-consciously sober and erudite approach to subject matter. Lucas consistently sought unusual subjects, and moreover eccentrically altered the conventional choice of moment in his way of telling stories," (The Renaissance Print, 1470-1550, New Haven/London, 1994, p. 316). This preference is seen in his David Playing the Harp before Saul, taken from a story in the Book of Samuel in the Old Testament of the Bible. According to scripture, an evil spirit from the Lord plagued King Saul, making him agitated and fearful of persecution. Because music was thought to have a therapeutic effect, the king summoned the hero and warrior David, who was renowned for his skill with the harp. Van Leyden shows the troubled and enthroned king stiffly bent, tightly clutching a spear, his feet entangled. David stands before him, stoic and resolute, playing his harp. A crowd of onlookers in the packed interior gossip in the background, forecasting the king's mental state. The scene is an expertly-devised visual precursor to David's eventual succeeding of Saul as the King of Israel. Bartsch 27; Hollstein 27; Volbehr 26.
Set Alert for Similar Items 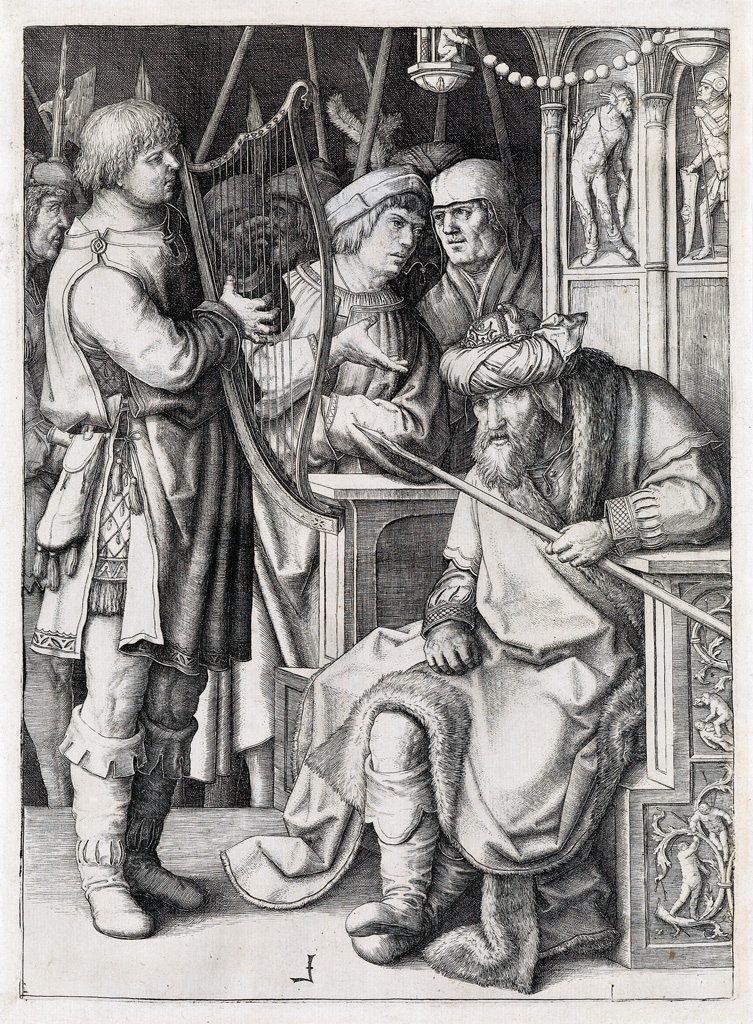