Exhibited: The Ninth Annual Exhibition of the Society of Independent Artists, New York, NY, March 6 - 29, 1925, with entry label pinned to the frame back, signed and inscribed "202 W. 140th St." (the artist's home address) in ink.

Illustrated: The Society of Independent Artists, 1925. Of the two paintings, Along the Harlem River and High Bridge, entered by Malvin Gray Johnson, this was the one chosen to be illustrated.

Along the Harlem River is a great re-discovery of one of Malvin Gray Johnson's modernist landscapes. Its location was not known at the time of his 2002 North Carolina Central University Art Museum retrospective. This painting shows the growth of modernism in African-American visual art by the mid-1920s. This is also only his second painting to come to auction. Largely due to his sudden death at the age of 38, his 1920s works are extremely scarce--the retrospective located only two out of 60 paintings and drawings.

Malvin Gray Johnson painted Along the Harlem River while completing his studies at the National Academy of Art and Design where he studied with Leon Kroll, George Lawrence Nelson, and Ivan Olinsky. In 1925, Johnson was able to find employment that allowed him to take day painting classes with Francis C. Jones and Charles C. Curran. Jacquelyn Francis connects this early Harlem landscape with a similar work by his contemporary Aaron Douglas. Francis writes how this "unlocated" but reproduced painting and Douglas's Power Plant in Harlem, in the collection of the Hampton University Art Museum, both display the Ashcan School influence in their industrial subjects. Johnson's instructor Leon Kroll was also known for "his muscular depictions of industrial New York." This small but bold landscape was painted four years before his iconic work Swing Low, Sweet Chariot, but in many ways is more modern. Relying on just the small black and white catalogue photograph (see illustration), Francis sees his approach "akin to figurally abstract landscapes of the 1930s such as those of Arthur Dove, Marsden Hartley and William H. Johnson." Swing Low, Sweet Chariot launched his career, and placed him alongside Aaron Douglas and Henry Ossawa Tanner as one of the great African-American painters at that time. But this Harlem landscape establishes that Malvin Gray Johnson was already a modern innovator in 1925. Rodgers pp. 20, 54-55.

WITH--A copy of the The Ninth Annual Exhibition of the Society of Independent Artists catalogue is included.
Set Alert for Similar Items 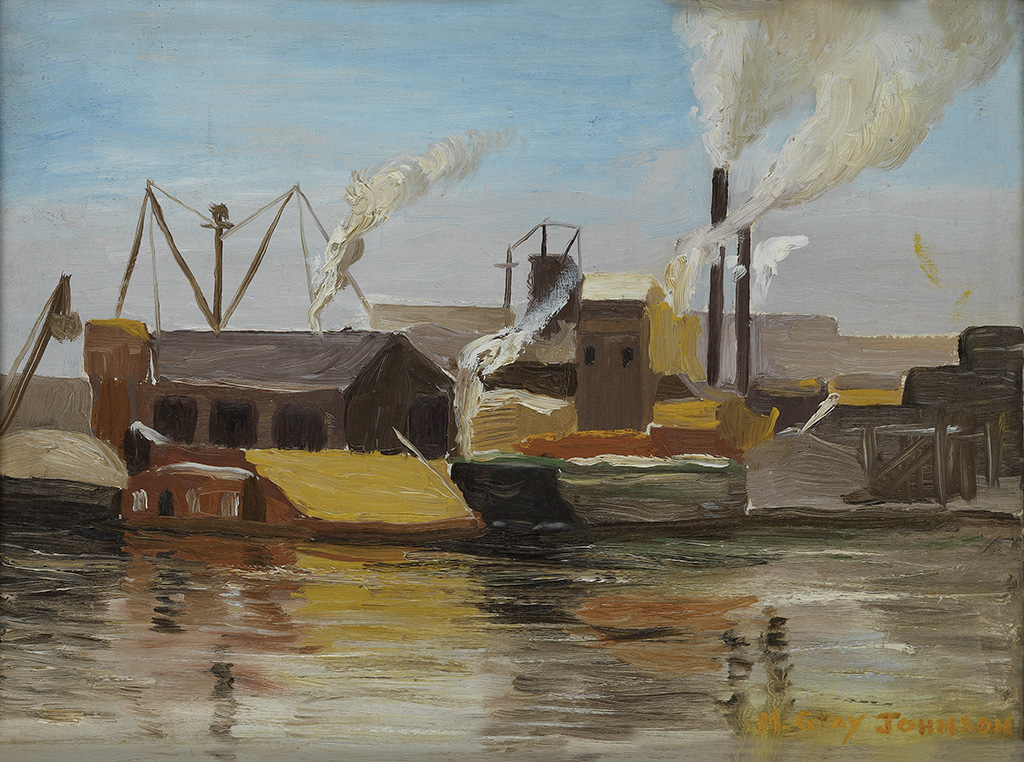