This marble carving is an exceptional and extremely scarce work of the great Chicago sculptor Marion Perkins. Born in Marche, Arkansas, at the age of eight, Perkins was sent to live with relatives on the South Side of Chicago in 1916. Marion Perkins attended Wendell Phillips High School, the first Chicago high school where the majority of the students were African American. He soon married Eva Gillon, who became his model and muse; they had three sons and settled in Bronzeville. While interested in theatre and literature, Perkins worked a series of menial jobs to support his family until he acquired a newstand in the late 1930s. Perkins then had the resources and time to create an outdoor studio in his backyard. Not only a talented stone carver, the self-taught artist also carved in wood, and modelled in clay, plaster and steel wire.

Perkins first gained attention in 1940 with two stone works included in the American Negro Exposition. With the opening of the Southside Community Art Center that year, Perkins had an artistic venue where he could both exhibit and teach; he soon became an important figure of the Chicago Renaissance. His first triumph was being invited to exhibit at the Art Institute of Chicago's prestigious Annual Exhibition of American Art in 1942 where he showed his powerful limestone carving John Henry. After participating in several invitational exhibitions, in 1947 the IBM Corporation acquired his Figure at Rest. Then in 1948, his beautiful marble Ethiopia Awakening won the prize in sculpture at the Art Institute's Annual Exhibition of Artists of Chicago and Vicinity, and Perkins was awarded an esteemed Julius Rosenwald Fund fellowship grant.

Perkins's direct approach to stone sculpture is epitomized by his iconic 1950 Man of Sorrows. This powerful African American head of Christ with a crown of thorns was the sensation of the 1951 annual Chicago artists invitational at the Art Institute; it was featured in an Ebony magazine profile, and acquired by the museum. Perkins often found such fine materials in vacant lots and abandoned houses on the South Side. With Untitled (Head of a King), Perkins was not deterred by the narrowness of the marble slab - he rendered this regal head in three dimensions by carving the profile in the thin outer edges. This distintictively modern approach, influenced by Brancusi and Modigliani, is also seen in his pair of limestone heads, Don Quixote and Sancho Panza, circa 1955. Despite these successes and widespread acclaim in Chicago, Perkins never received national recognition.

His sculptures are found in the collections of the Art Institute of Chicago, the DuSable Black History Museum and Education Center, and the National Gallery. Marion Perkins continues to exert his influence on contemporary art today. Kerry James Marshall's monumental picture, Souvenir III, 1998 includes a homage to the artist in his painting, along with Bob Thompson, Zora Neale Hurston, Dorthy Dandridge, and Augusta Savage. Perkins/Flug/Lusenhop pp. 2-7, 20; Schulman p. 138.
Request Condition Report Set Alert for Similar Items 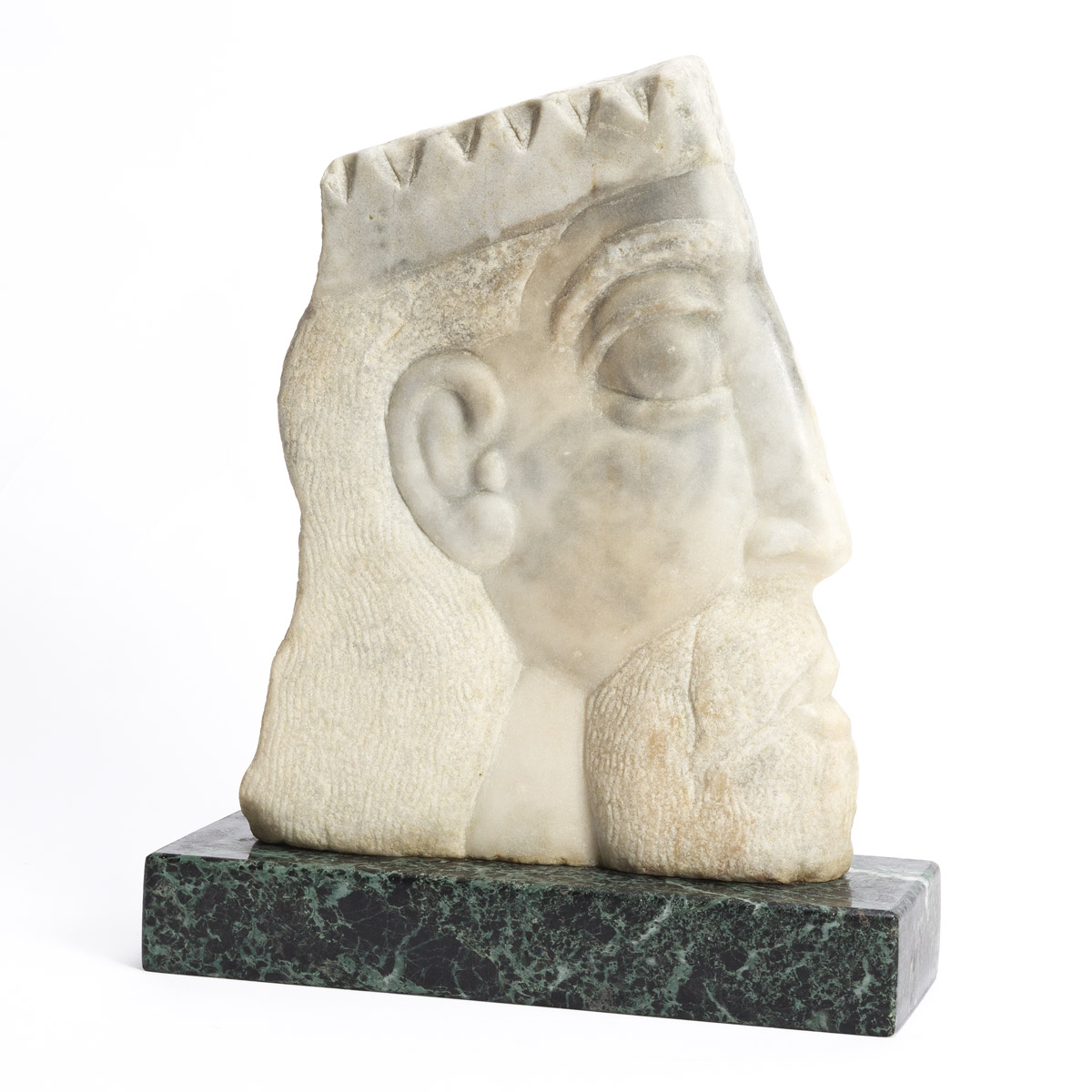 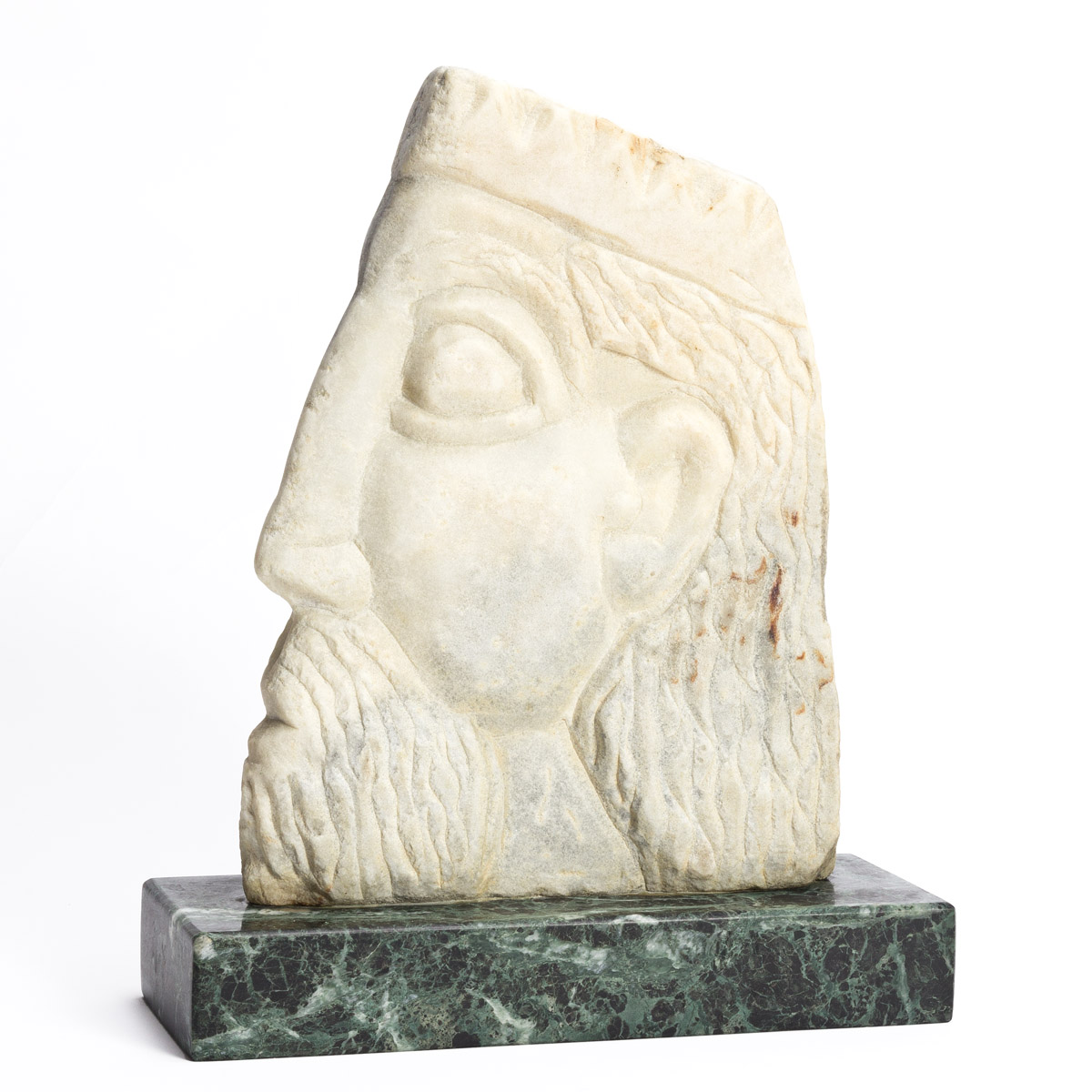