This work will be included in the forthcoming catalogue raisonné Marsden Hartley Legacy Project: The Complete Paintings and Works on Paper, by Gail R. Scott, in cooperation with Bates College Museum of Art, Lewiston, Maine.

Growing up in Maine and Cleveland, Hartley showed promise as a young artist and was funded by an art patron to study in New York in 1899. He studied with William Merritt Chase (1849-1916) at his New York School and at the National Academy of Design. But it was not until he gained the support of Stieglitz and the artist Arthur B. Davies (1862-1928, see lot 48), a senior member of the Stieglitz circle, that he was able to travel to Paris. In France, Hartley closely studied the Post-Impressionist and Cubist masterpieces and experimented in these styles. From Paris, he traveled through Europe and arrived in Berlin. Adopting a bold new style, Hartley exhibited with the avant-garde Der Blaue Reiter group in 1913. He revisited Berlin in 1914, producing his most iconic works of the War Motif series, following the death of his purported romantic partner, a German World War I soldier named Karl von Freyburg. These paintings are comprised of bold, sweeping colors, German insignia and undulating flattened shapes.

Ingenious and innovative, Hartley drew from the two-dimensionality of the Cubists and the spiritualism, raw emotion and subjectivity of the Expressionists. Hartley traveled around the world throughout his career, often deeply embedding himself in his surroundings. His works slowly became less abstract as his career advanced.

The current work is characterized by Hartley's emboldened flattened style which first appeared in his War Motif paintings. It is part of a series of male and female nudes done during the time Hartley lived in Berlin in the early 1920s. Though his sexual orientation is the topic of much speculation, there is evidence that Hartley did identify as queer and enjoyed the sexually liberal society in Berlin. Whatever the case may be, Hartley's male nudes, of which there are few examples, show vulnerable poses with attractive, typically exaggerated musculature. The model's gazes are tender and shy, often not meeting the viewer's eyes. The current work's subject has a trim waist with large hands and forearms. As Gail R. Scott, Director of the Marsden Hartley Legacy Project notes, Hartley recruited these models, usually boxers or wrestlers, from the gyms in Berlin. Much of Hartley's oeuvre consists of contemplative still lifes and powerfully personal landscapes. Hartley's male nudes from the 1920s are perhaps the most revealing, if not the most scarce, testament to this introverted artist's life in Berlin: coming to terms with his sexuality, feeling newly found acceptance in a tolerant city and navigating life after the trauma of World War I.
Set Alert for Similar Items 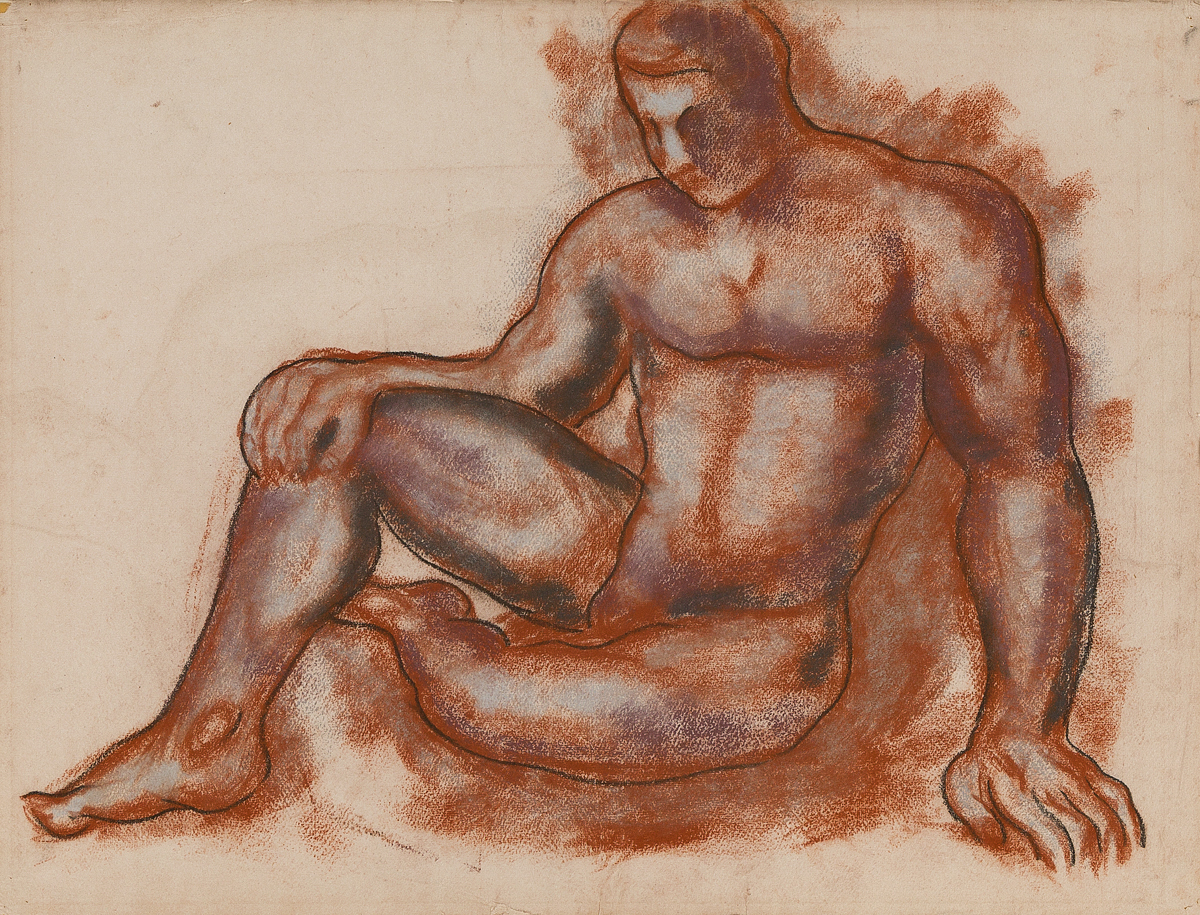