Offered here is a possibly unique prepublication draft of "Letter from Birmingham Jail," which remains one of Martin Luther King's most enduring works. It was written under difficult circumstances. King and the Southern Christian Leadership Conference carried out non-violent protests in Birmingham, Alabama in defiance of a local judge's injunction. He was arrested on 12 April 1963. That day, eight local white clergymen penned a "Call for Unity" in the local newspaper, urging demonstrators to seek redress through the courts rather than by following outside agitators and disobeying the law. From his cell, King penned an enduring deconstruction of his moderate fellow clergymen, making the case for civil disobedience in the face of unjust laws.

The letter began on jumbled notes on scraps of paper smuggled to King by a prison guard, and as King and the SCLC staff recognized its power, it went through various revisions and was distributed locally to churches before making its first partial print appearance on 19 May 1963. From there, it appeared in hundreds of different publications--books, newspapers, magazines, and in pamphlet form, often with subtle textual variations. Although King's original manuscript has long since disappeared, several early drafts of the "Letter from Birmingham Jail" have been traced by Stanford University's King Papers Project. No other examples of the present draft have been found.

The textual history of the Letter has been discussed in several books on King, showing that several typescripts were prepared by at least two different teams of SCLC members using different typewriters, led by Wyatt Tee Walker and Addine Drew (see Diane McWhorter, Carry Me Home: Birmingham, Alabama, The Climactic Battle of the Civil Rights Revolution, pages 354 and 390). E. Culpepper Clark in a 1993 essay noted that "a duplicated copy of the letter did circulate in Birmingham, but the date of its distribution is not known" (see "The American Dilemma in King's 'Letter from Birmingham Jail,'" in Calloway-Thomas and Lucaites, Martin Luther King Jr. and the Sermonic Power of Public Discourse, page 35). In 2001, S. Jonathan Bass wrote "Adding to the confusion surrounding the letter's production were the slightly different versions of the document produced by the SCLC publicity corps" (Blessed Are the Peacemakers, page 138). A 2013 book asserted that "Mimeographed copies of the 'Letter' appeared in black churches in May" (Jonathan Rieder, Gospel of Freedom: Martin Luther King, Jr.'s Letter from Birmingham Jail, page 103).

Provenance: acquired with papers of the Inter-Citizens Committee, which worked to investigate and publicize cases of police brutality and harassment in Birmingham from 1960 to 1965, and thence by William Gregory, Books & Photographs. A copy is on file with the Martin Luther King, Jr. Papers Project at Stanford University. 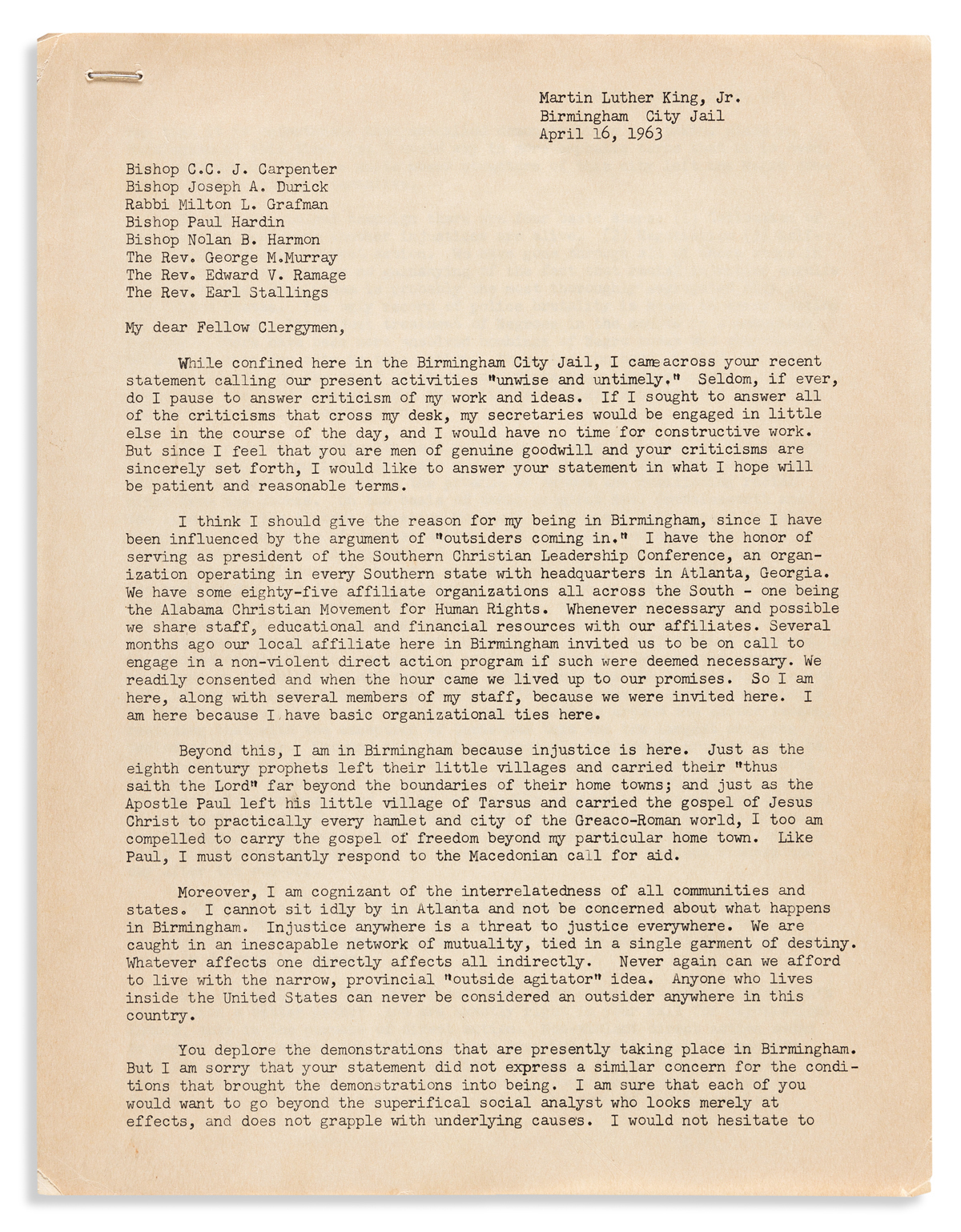