Letters, mostly personal subjects: ALS, to "Dear Anne": "I am to see the young woman this P.M. and shall report at length. The town gossip says that she now has 16 teeth and can count up to 75. This seems marvelous. . . ." 1 page, 8vo, "Hotel Algonquin" stationery. With the original envelope. New York, "Tuesday" 6 August 1935 [from postmark] TLS, to "Dear Anne": "I sincerely hope . . . that you'll not come out of that beautiful hospital with anti-Semitic ideas floating in your mind. Jewish patients make their sentiments known simply because they are frank and honest. The Goys, if they had the courage, would howl just as loudly. . . ." 1 page, oblong 8vo, personal stationery. Baltimore, 5 February 1943 TLS, to "Dear Sara": "I am for you for Presidentess of the United States, and only hope that I live long enough to vote for you. This is not a joke. Consider the career of La Eleanor. She was once a poor girl on the Hudson, and now she is invited to the wedding of the future Queen of England. . . ." 1 page, oblong 8vo, personal stationery. Baltimore, 3 November 1947 others.
Postcards, many unsigned, a few in pencil, each to Sara Duffy, commenting upon the image on verso showing a view of one or more buildings in New York City or Baltimore: "This bldg. is full of skeletons of large animals--some of them nearly a mile long. It is one of the points of interest in NY." Verso shows American Museum of Natural History "This famous statue is 8300 feet high and weighs 92,500 tons. It is one of the wonders of the world." Verso shows the Statue of Liberty "Brooklyn is a wonderful city, though few have ever seen it. Many of its people speak English fluently." Verso shows skyline of Brooklyn "These cannon protect Baltimore from Japs, Nazis, etc." Verso shows Fort McHenry others. Each 1 page, oblong 12mo. [Baltimore or Sparta, NC, March-July 1945].
Offprints, each Signed and Inscribed on the front cover, reprinted from American Speech, 1944: "War Words in England." "Anne Duffy / as ever / HLM / 1944" "American Profanity." "Dear Anne: / There are some good / suggestions here / HLM." Each 4to, self-wrappers; dated inscription affected by toning (but still legible). Np, [1945].
Books, each Signed and Inscribed on the front free endpaper: Making a President. "Jessie [sic] Leach Rector / This is all that / remains of three / weeks' hard work / 1932 / HLMencken." 8vo, publisher's cloth, spine ends markedly worn; dust jacket in pieces and lacking rear panel. New York, 1932 Happy Days. "Dear Anne: / Proof that / I was once young. / HLM." 4to, publisher's cloth, worn. New York, 1940 Heathen Days. "Mairseadh @ Eamonn O'Dubhagh / as ever / H / L / M / ([in Hebrew: 'H.L. Mencken'])." 4to, publisher's cloth, worn; dust jacket front panel only. New York, 1943 The American Language: Supplement One. "Anne, Sara and the Mister / with my best / HLM / 1945." 4to, publisher's cloth, corners and edges worn. New York, 1945 The American Language: Supplement Two. "Anne Duffy / as ever / HLM / March 20, 1948." 4to, publisher's cloth, markedly worn and dampstained; inscription affected by moisture (but still legible); dust jacket worn and stained. New York, 1948.
Photograph, with small holograph ink drawings: "For the artist Duffy and lady, / with the kindest / personal regards of the Mencken Family / By HLM [drawing of beer mug and crucifix] [in Hebrew: 'Kosher']," group portrait, showing Mencken surrounded by African-American children. Inscribed in the image at lower edge. 8 1/2x11 inches; closed tears in upper edge repaired verso with cello tape, chipping at all edges, scattered creases. Np, nd.
with--Sara Haardt. The Making of a Lady. Signed and Inscribed, "For Jessie / With my devotion / Sara," on the half-title. 8vo, publisher's cloth. Garden City, 1931; inscription: Np, nd.
Anne Duffy née Rector (1899-1970) was an American artist, wife of cartoonist Edmund Duffy, and close friend of Mencken's wife, Sara Haardt.
Provenance: From Anne Duffy or Sara Chermayeff née Duffy by descent to the present owner. 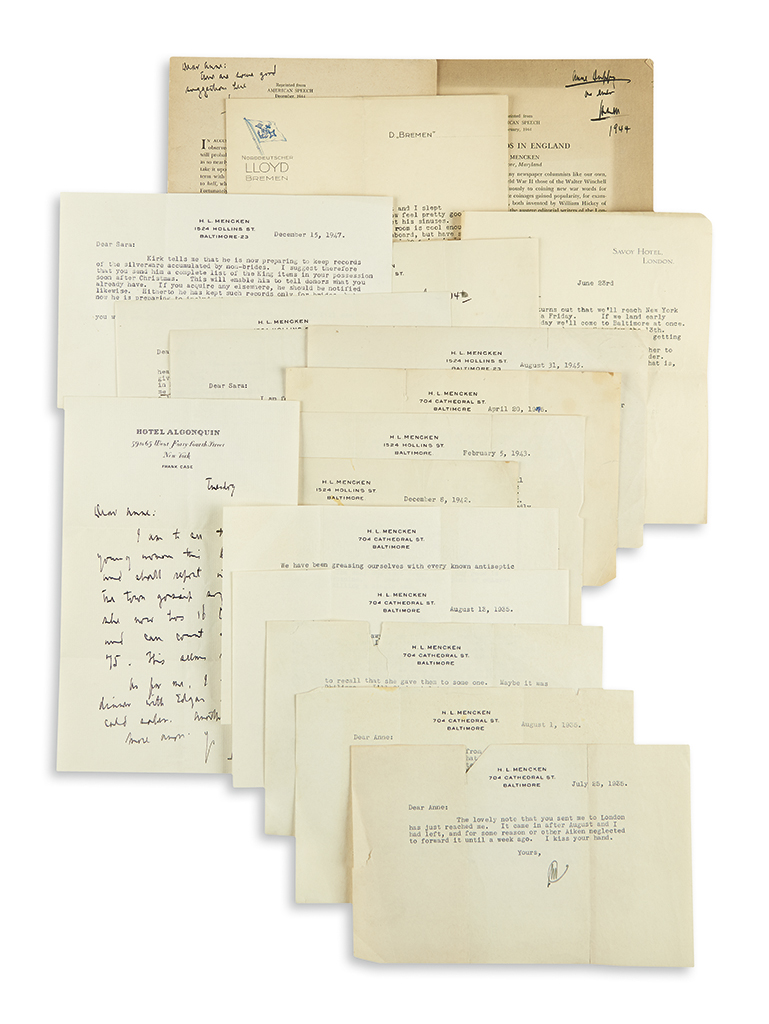 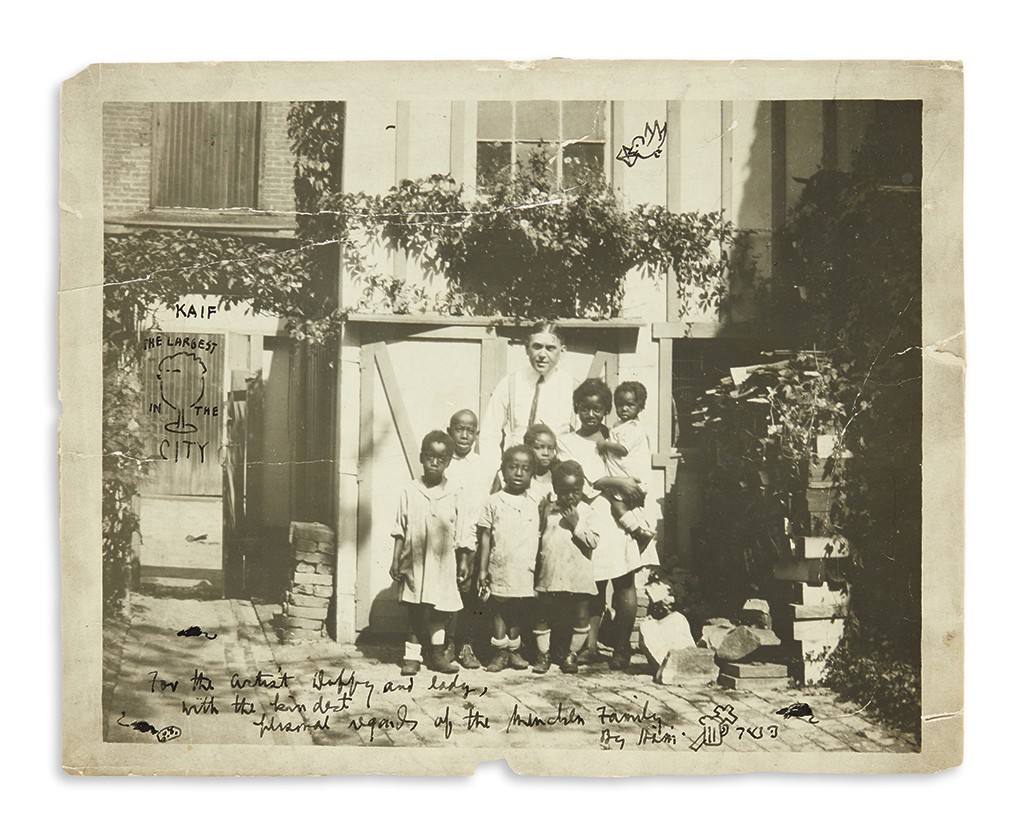