Price Realized: $ 1,600
Price Realized: $ 2,000
?Final Price Realized includes Buyer’s Premium added to Hammer Price
Estimate: $ 1,500 - $ 2,500
"GWTW IS QUIETING IN NEW YORK . . . UNFORTUNATELY, THERE IS NO QUIETING HERE" MITCHELL, MARGARET. Three Typed Letters Signed, "M" or "Margaret," to New York Evening Post Editor Herschel Brickell ("Dear Herschel"), on both personal and professional topics including Gone with the Wind. The first, inviting him to visit Atlanta, discussing a speech coach engaged by [Gone with the Wind film producer David O.] Selznick, hoping to discuss personally certain "serious" matters involving Gone with the Wind, and declining to visit New York because she wants to avoid autograph hunters among other reasons. The second, sending a poem by Agnes Kendrick Gray [present], noting that some residents of Macon, GA, are not convinced by the claims of Willie Snow Ethridge that the characters and events in her book [As I Live and Breathe, (1937)] are fictional, giving travel plans, and, in a postscript, expressing surprise that the health of Marjorie Kinnan Rawlings had taken a bad turn. The third, sharing news of common friends, expressing regret for not being able to meet certain people during her trip to New York, complaining of too many uninvited visitors upon returning from her trip, and, in a holograph postscript: "I lost the decision in the Dutch court. I still have one more appeal and I'm taking it [probably concerning an injunction against foreign pirated editions of her book]." Together 8 pages, 4to, personal stationery; horizontal folds. One with the original envelope. Atlanta, 7 December 1937; 20 June; 11 July 1938
Set Alert for Similar Items

7 December 1937: ". . . That pit viper, Ann, tells me she has revealed all to you about the giddy and idiotic headgear which I am nervously trying to balance on my head. She should talk! She has a hat bigger than Mae West ever dared, with a veil four yards long dripping from it, and she looks as though she had stepped from one of the earlier works of E. Phillips Oppenheim, an international spy at her best and worst.
". . . G[one] W[ith] T[he] W[ind] is quieting in New York, if I may judge from the best seller list where I am now in twelfth place. Unfortunately, there is no quieting here and I believe our real work and trouble is just now beginning. I have not written you anything about these matters but there are many of them and some of them very serious. . . . [T]hey are too involved to go on paper and some too serious to go in a letter. . . . [I]n some of the business matters now under consideration I can take no risks of a break. . . . I hate to receive cryptic and hinting letters and I hate to write them even more. . . ."
20 June 1938: ". . . I haven't come up for air since we went off with the Georgia editors. Willie Ethridge was there as a guest of honor and made a good speech. The book has gone into the second edition . . . . Despite Willie's disclaimer in the front of the book and her oft-repeated declaration that she made up every character and incident, Macon, Georgia, responds unanimously, 'Oh yeah!' I hope Willie can go back to visit there some day. . . ."
11 July 1938: ". . . I am happiest when the temperature is around 90. Probably it's a matter of metabolism, but the hotter the weather gets the more pep I have. I must be like Georgia cotton--need red dirt and hot, dry weather. . . ."
Henry Herschel Brickell (1889-1952) was a writer, editor and diplomat from Mississippi, who worked at the New York Evening Post as editor and columnist, 1919-28 and 1934-38. 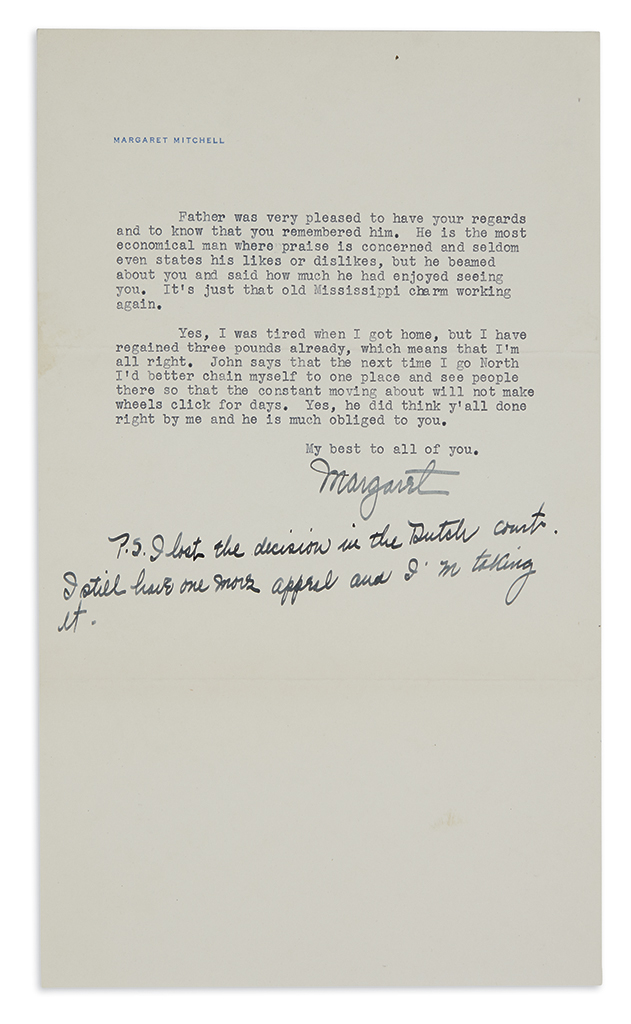